It’s almost set in stone now that Qualcomm will follow the Snapdragon 835 processor with a Snapdragon 845, most likely based on 7nm architecture.

It feels way too early for Qualcomm to even hint at the name of Snapdragon 835’s ultra-high-end sequel tomorrow in Beijing, during the expected announcement of a mid-range SD660 processor, but it’s never too early for the rumor mill to (timidly) start churning.

We may have even got confirmation from the San Diego-based semiconductor titan that a Snapdragon 845 will (eventually) follow in the footsteps of the SD835 that’s still in relatively short supply, commercially launching inside Samsung’s Galaxy S8 and the Xiaomi Mi 6 only.

Yes, the SDM845 abbreviation was spotted on the company’s official website for a little while, before someone realized the blunder, deleting all traces of it, alongside SDM630 and 660 references. SDM, of course, stands for Snapdragon Mobile, and it makes perfect sense for an 845 to come after an 835, although the naming scheme has been somewhat confusing of late, considering previous 821, 820, 810, 808, 805, 801 and 800 releases. 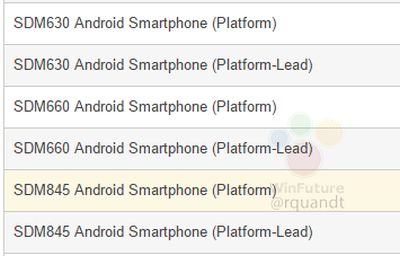 In any event, what’s important to remember about Qualcomm’s next SoC powerhouse, regardless of branding, is that tipsters and analysts are predicting another die shrink, from a 10 to a 7nm process. Both Samsung and TSMC remain in contention for the chip’s actual manufacturing, with the latter pure-play semiconductor foundry reportedly anticipating a performance progress of between 25 and 35 percent.

It almost goes without saying next spring’s Samsung Galaxy S9 should be the world’s first smartphone packing this extra heat, though it’s unclear if some sort of intermediate silicon is also planned for a fall rollout inside the likes of the Note 8 or LG V30.