Rumors are also spreading of a Snapdragon 660 that runs with some of the latest Kryo chip architecture. And yes, there’s a Snapdragon 830 in the pipe.
Published 22 November 2016, 15:15 EST

More Qualcomm silicon is headed our way and it’s said to kick off with the Snapdragon 835 early next year. We hear it’s going to take the MSM8998 part name and it will utilize Samsung’s 10nm FinFET process. What we don’t know is anything else.

But we have a neat chart out of Weibo that supposedly shows us what the Snapdragon 835 has and where it goes. There’s also a Snapdragon 660 at the head as well.

Apparently, the Snapdragon 835 will be specced out as an octa-core chip in an improved Kryo 200 architecture — the original Kryo architecture debuted with the Snapdragon 820. The Adreno 540 GPU and an X16 LTE modem is packed in along with support for up to four LPDDR4X RAM disks and UFS 2.1 storage. The Samsung Galaxy S8 will be the prime device for this chip, set to launch in the first quarter. 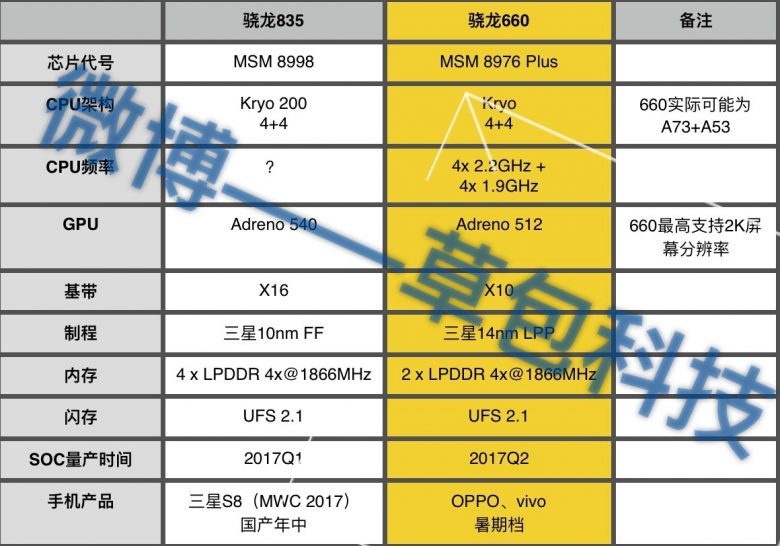 The mid-range Snapdragon 660 seems to be a fresh start for the line as it will get hold of eight chips in the original Kryo foundation — four running at 2.2GHz tops, the others at 1.9GHz — tagged with an Adreno 512 GPU and an X10 LTE modem. Samsung will provide a 14nm LPP process for the chip. The 660 can support two LPDDR4X disks and UFS 2.1 storage. OPPO and vivo will supposedly debut the chip in one of their devices starting in the second quarter.

In a separate post, the same source that was able to obtain the blueprints is also talking about a Snapdragon 830 — a name we’d thought Qualcomm wanted to skip over. Rather than that, the chipset could be offered starting next third or fourth quarter to force mid-range devices closer to the top tier in performance.

The same Samsung 10nm FinFET found on the 835 will be on the 830 along with either an eight- or six-core Kyro 200 processing unit, an Adreno 519 GPU and an X12 LTE modem. Nothing is locked down here, though, as we are at least seven months or so from launch of this chipset.

It is now said that production of many of this year’s major chipsets, including the Snapdragon 821, 820, 625, has slowed or stopped altogether to prepare for reconfiguration with the newer product roadmap closing in on us. TSMC and Samsung will need all the time they can get as both continue to work on their respective 10nm designs.

You can use the Wireless Keyboard Sharing feature to connect your Samsung Book Cover Keyboard to your smartphone.

Take a look at some of the new features that are coming to your Samsung Galaxy devices with the arrival of One UI 3 and Android 11
YouTube 1.8M
Facebook 570K
Twitter 197K
Instagram 133K
RSS