The first Android smartphones powered by Qualcomm’s hot new Snapdragon 710 processor will apparently be released by the end of the quarter, possibly supporting various “premium” technologies at an affordable price point.
Published 24 May 2018, 04:06 EDT

There’s a good reason why Qualcomm is the unrivaled heavyweight champion of the Android smartphone world in terms of SoC supply, as OEMs can always count on the San Diego-based semiconductor giant for top-notch high-end chipset technology.

Of course, Qualcomm also maintains a pretty robust low to mid-end portfolio, not to mention popular upper mid-range choices like the Snapdragon 660 for partners as diverse as Samsung, OPPO, Vivo, Nokia or Xiaomi.

But believe it or not, there’s still some space between the SD660 and the latest Snapdragon 845 flagship processor, which Qualcomm is ready to “define” and fill up with a new 700 family. Vaguely and tantalizingly previewed a few months back, this aims to bring “in-demand premium features to a new tier of smartphones”, starting with the Snapdragon 710 mobile platform detailed today.

Expected “to be found in consumer devices in the second quarter of 2018”, which ends in a few weeks, the 710 incorporates several “key AI capabilities and performance advancements”,  including a Spectra 250 ISP supporting 32MP single cameras and 20MP dual shooter combos. 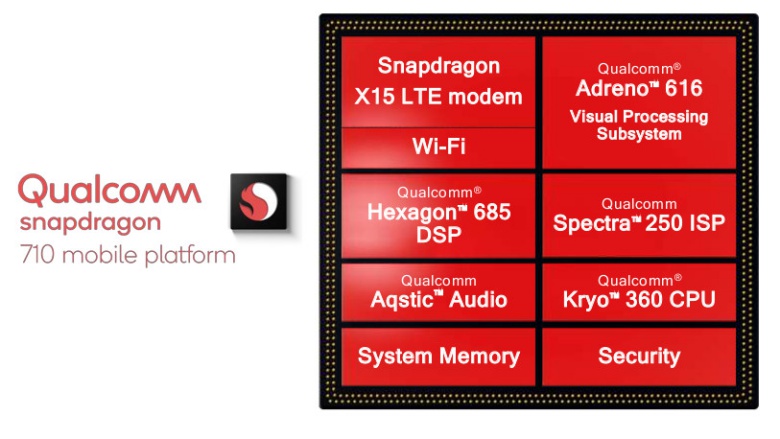 As far as connectivity is concerned, a Snapdragon X15 LTE modem is baked in, handily beating the X12 built into Snapdragon 660, 820 and 821 chips with maximum download speeds of 800 Mbps.

Superior in many ways to the 820 and 821 that powered flagship devices just a couple of years ago, the Snapdragon 710 is obviously not as impressive as the 835 and 845. But it’s remarkably close, with the same 10nm roots, many AI tricks up its sleeve (from “deep portrait modes” to “Face ID/Unlock with active depth sensing”), as well as 4K HDR display playback capabilities.

Up to 40 percent more power-efficient than the Snapdragon 660, thanks to a frugal new Adreno 616 GPU, the 710 also boasts a 20 percent “overall uplift in performance”, enabled by the Kryo 360 architecture. There are eight Kryo 360 CPU cores in tow, two clocked at up to 2.2 GHz and six capping off at a 1.7 GHz frequency. Sounds like we’re in for some spectacular “affordable high-tier” smartphones soon.

Android Auto is also getting Shortcuts on the launch screen.

The Realme GT is all set to be launched in China on March 4.

The Google Pixel 5a is said to come equipped with a 6.2-inch OLED display while rocking a build strikingly similar to the Pixel 4a 5G.
YouTube 1.8M
Facebook 570K
Twitter 197K
Instagram 133K
RSS