The 10 nm-based Snapdragon 710 might be Qualcomm’s first 700-series SoC to see daylight soon, followed by an absolutely phenomenal-looking 8 nm Snapdragon 730.

Meant to bridge the gap between the high-end Snapdragon 800 family and the mid-range 600 series, a number of Qualcomm Snapdragon 7xx processors are slated to ship to consumers later this year inside “affordable high-tier” smartphones.

Unfortunately, the San Diego-based heavyweight champion of mobile SoCs had no actual specifications or even official names to share when vaguely and surprisingly announcing the Snapdragon 700 series back in February.

But now a very convincing image purporting to show the complete lists of Snapdragon 710 and Snapdragon 730 features is making the rounds, looking more impressive than we ever dared to imagine.

Obviously, the 730 is supposed to be the punchier of the two unreleased chipsets, but believe it or not, it could one-up the 10 nm FinFET LPP fabrication process of the Snapdragon 845 flagship, adopting a smaller, more energy-efficient 8-nanometer LPP (Low Power Plus) node. 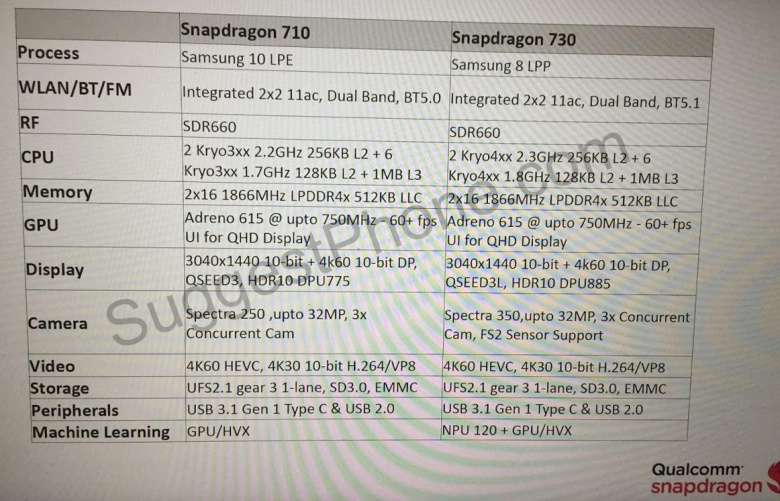 That might mean the Snapdragon 730 will be unveiled after the 7 nm-based 855, with a dedicated NPU (Neural Processing Unit) also in tow, as well as a Spectra 350 Image Signal Processor (up from the 845’s 280), and an octa-core CPU configuration with two Kryo 4xx cores clocked at 2.3GHz and six 1.8GHz Kryo 400s.

If that’s the future of mid-range smartphones, can you imagine what tomorrow’s Android high-enders will be capable of?