Research and development has been happening for a long time, but foldable displays still aren’t at the stage where they can survive three years of the bends.
Published 22 March 2018, 18:03 EDT

Flexible displays have been on demo stands at nearly every tech-related conference. But why haven’t we seen them in real products that can change their shape? According to one Qualcomm executive, it’s because the diodes likely can’t last more than the length of a trade show.

Speaking with TechRadar, product manager of display technology Salman Saeed that display transistors have yet to withstand an acceptable level of bending activity. Given the expected lifetime of a smartphone, passing this threshold will be an achievement indeed. 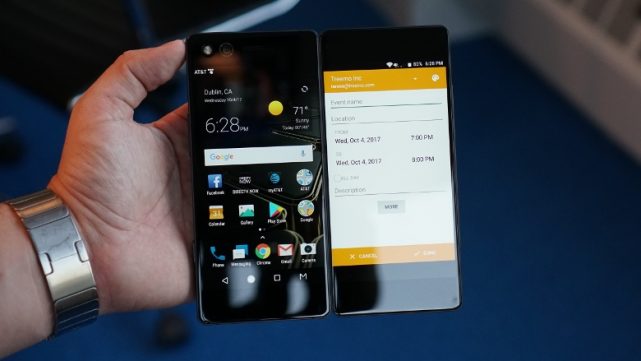 That’s left stop-gap products like the ZTE Axon M — with its two rigid displays that can come together and apart again on a hinge — filling the void, but the executive gave a withering take on the execution of the device with a minor consolation toward its concept.

“[The Axon M] looks a little ugly… the use cases are pretty bad. The second display does practically nothing, but I think it’s compelling.”

If users can’t expand and contract their displays at will just yet, there might as well be more of them that can fold in and out as needed, Saeed thinks.

“If you look at what Samsung has done with the Snapdragon 835 and DeX, our chipset can power two, three, four displays at the same time,” he said, “so yeah, we’re underutilized right now. We have the GPU horsepower, we have everything needed to fully power all of those extra pixels.”

Samsung has long been in the running to create a phone with a foldable display — what we’ve been calling the Galaxy X. From what Salman Saeed can tell, it’ll be a while yet before something like that will come from any of the Tier One manufacturers. But will more screens lead to satisfactory user experience in lieu of stretchable screens? Signs from DeX owners have pointed to “no,” but we shall see.

The 50MP ISOCELL GN1 sensor has a larger sensor and pixel size, and employs the Dual Pixel PDAF tech for faster and more accurate focus lock.