The first Snapdragon-powered Windows 10 laptop is here and it’s coming out of Taiwan.

The ASUS NovaGo is being touted as the first Gigabit LTE laptop that is able to efficiently stay connected while lasting all day — up to 22 hours. It utilizes the Snapdragon 835, presumably with the X16 LTE modem with four-way carrier aggregation and 4×4 MIMO. The modem can still run cloud sync operations even while the laptop is asleep with Connected Standby mode.

It is able to run Windows apps, though not .exe files as it is on Windows 10 S — however, just as with the Microsoft Surface Laptop, users can upgrade to Windows 10 Pro for free. The NovaGo is compatible with Windows Ink styluses, fingerprint-reading Windows Hello authentication as well as Cortana. 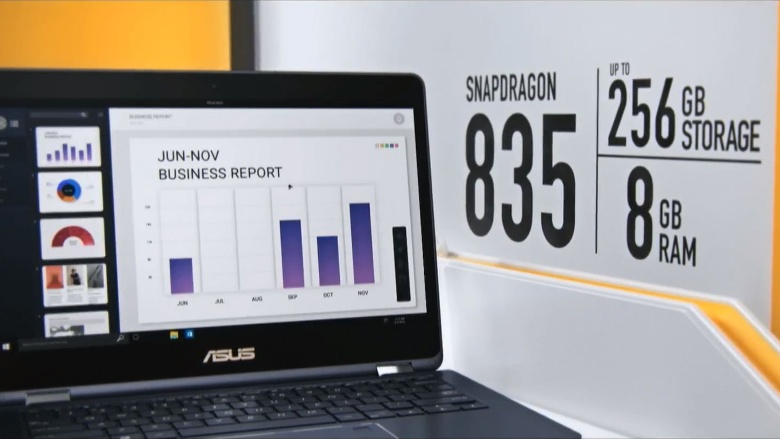 The I/O includes 2 full USB ports at USB 3.1 spec, a 3.5mm phono jack, either nano-SIM or embedded SIM for cellular plans, a microSD card slot for up to 256GB cards, an HDMI port and a DC connection. The screen can flip all the way around to act as just a drawing tablet and there’s an ASUS Pen with 1,024 levels of pressure sensitivity.

The NovaGo starts with 4GB of RAM and 64GB storage at $599. The model with 8GB of RAM and 256GB of storage runs to $799. The United States, Canada, Italy, United Kingdom, France, Germany and Taiwan will have first dibs on the product with carrier partners.

There is no specific timeline for launch announced as of yet. Carrier partners may give those details on their own.

HP also launched a convertible tablet with a Snapdragon 835 today, the ENVY x2.

Get amazing deals on some of the latest Microsoft Surface products at Amazon.com, where you will also find monitors and other devices on sale