OPPO was the number one smartphone vendor in China during Q4, and it also had the top-selling 2016 model. Apple wasted a year.

After providing an in-depth analysis of the paramount Indian smartphone industry, where there’s still plenty of room for growth for Samsung, Apple and especially Chinese brands, Counterpoint’s Q4 2016 and full-year Market Monitor is now also out as far as the world’s most populous country is concerned.

While demand for intelligent mobile devices in China has lingered a little of late, shipments during the recent October – December quarter were actually up quite a bit, both annually (12 percent), and sequentially (9 percent), helping local yearly volumes set a new record.

Unsurprisingly, the super-fast-growing OPPO – Huawei – Vivo triad was largely responsible for year-end surges, with OPPO claiming the quarterly crown, Huawei the overall 2016 gold medal, and Vivo in third place in both rankings.

Also unsurprisingly, Apple “remains in a vulnerable position” in the largest smartphone market, registering an annual decline in sales of no less than 21 percent, thus having to settle for fourth and fifth place respectively in the Q4 and full-year OEM charts. 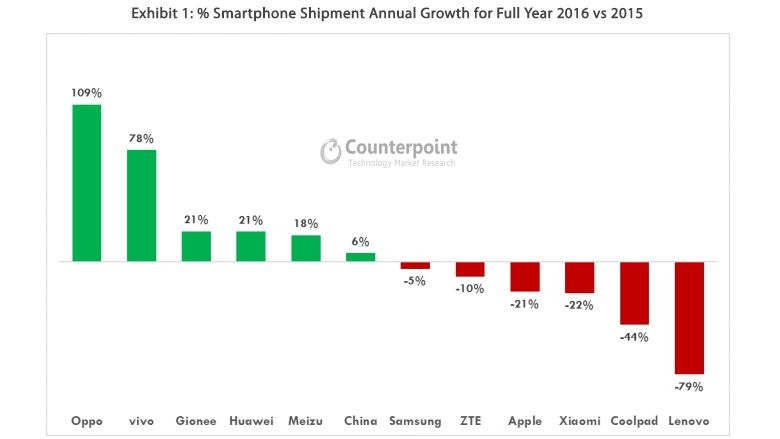 Worse yet, the iPhone’s dominance streak in the best-selling models hierarchy was broken after five years by the OPPO R9. OPPO, by the way, more than doubled its 2015 shipment numbers this past year, while Vivo, Gionee, Huawei and Meizu also posted robust increases.

Alongside Apple, Samsung, ZTE, Xiaomi, Coolpad and Lenovo saw their annual scores slip by anywhere between 5 and 79 percent, with not even a single “star” in Samsung’s Galaxy among the country’s top-selling 20 smartphone models. OPPO, instead, had a whopping five handhelds on the list, Apple and Xiaomi followed with four, while Huawei propelled three on the blockbuster charts.