Apple had a stellar Q1 2018 in the US, with six iPhones among the nation’s ten best-selling SKUs

It’s no big secret that global smartphone sales have started to decline after many years of constant and impressive growth, as several fully developed markets show increasing signs of fatigue, and replacement cycles continue to extend largely due to insufficient innovation.

All that being said, it’s also important to keep in mind three of the world’s top four smartphone vendors managed to defy all trends and boost their Q1 2018 shipment numbers.

Overall market leader Samsung has its own reasons to be proud of the company’s financial performance during this year’s January – March timeframe, even though Galaxy handsets didn’t do very well in China, India or the US.

As usual, the latter region was completely dominated by Apple, which registered a record 16 percent year-on-year surge in first-quarter shipments, reaching 16 million units, despite total US figures dipping 11 percent YoY.

Since Samsung’s sales were down 4 percent compared to the same period from last year, Apple obviously widened the lead to the Korea-based silver medalist, seizing a 42 percent slice of the American pie, compared to a 22 percent market share for Galaxy smartphones. 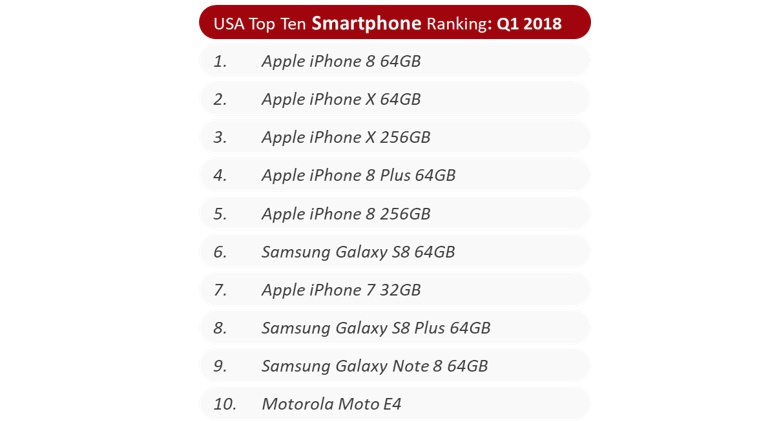 LG followed in third place, with 14 percent, while ZTE commanded a solid 10 percent of the nation’s 38.7 million shipments recorded in the March-ended quarter before receiving a hotly debated ban.

If said embargo will stand, Alcatel and Motorola are considered the top candidates for moving in and filling the prepaid void in the immediate future.

In case you’re wondering, it seems the iPhone X, 8, 8 Plus and even the outdated iPhone 7 all sold like hotcakes this past quarter in the US, with a grand total of six Apple SKUs among the nation’s most successful ten.

The 64GB iPhone 8 actually ruled the chart, followed by the same configuration of the iPhone X, the “all-screen” handset’s 256 gig version, the 64GB iPhone 8 Plus, and 256GB iPhone 8. One Galaxy S8, one S8 Plus and one Note 8 SKU were ranked sixth, eight and ninth overall, while the low-cost, low-end Moto E4 wrapped up the top ten.