Tablet shipments may have been down in Q1, but detachables continue to grow

The global tablet market is not exactly thriving, but detachable tablets are doing well, and they will continue to grow, according to the IDC’s research and projections.
Published 04 May 2018, 09:10 EDTUpdated 02 April 2021, 15:39 EDT

We don’t usually like to focus on quarterly tablet shipment reports as much as on market research concerning the far more competitive smartphone industry, but the International Data Corporation is providing some interesting insight into those record low Q1 numbers.

Overall, tablets are not doing well, and they’re yet to hit rock bottom, but there’s one specific subcategory that’s been thriving for a while now, looking “poised for strong growth in the near term.”

We’re obviously talking about detachables, i.e. tablets that can easily convert into laptop-style machines without featuring keyboards hardwired to the display. Apple’s iPad Pro was the world’s most successful such product between January and March 2018, selling 1.8 million units, which crucially contributed to a 2.9 percent surge in popularity for detachable tablets. 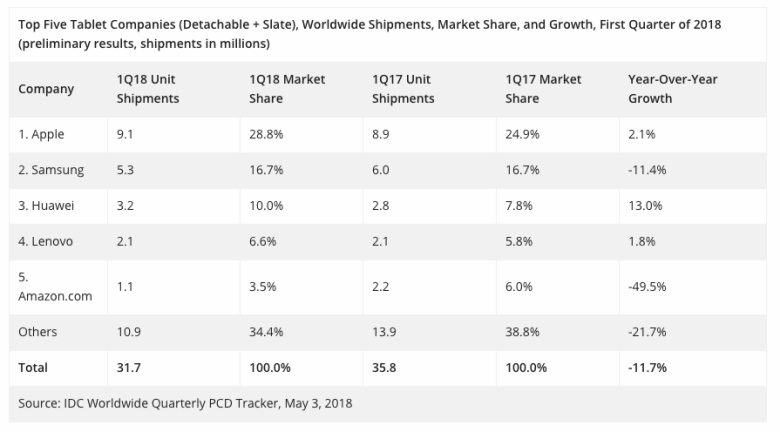 That may not sound impressive, but slates actually declined a whopping 13.9 percent year-on-year, leading to an 11.7 percent dip in overall global tablet shipments.

Looking ahead, the IDC expects Chrome OS’ official entry into the tablet category to further boost the appeal of detachables, powering robust and affordable alternatives for iPad Pros and Microsoft Surface models.

Interestingly, while Apple continues to comfortably lead the vendor chart, with 9.1 million detachable + slate unit shipments during the year’s first quarter, Microsoft is still out of the top five. Samsung retains the silver medal position, despite seeing its figures shrink from 6 to 5.3 million units, Huawei follows in third place, with 3.2 mil and 10 percent share, Lenovo is fourth, and Amazon fifth.

Always a holiday season standout, the e-commerce giant only managed to ship 1.1 million Fire slates in Q1 2018, down from 2.2m a year before.

The new Samsung W22 5G is aimed at the Chinese market, and the new version has slightly different colors with gold accents and a new logo.