Both Samsung and Apple contributed to Europe’s shrinking Q1 2018 smartphone shipment numbers, but the iPhone X was easily the continent’s most popular model, according to Canalys.
Published 09 May 2018, 11:19 EDTUpdated 02 April 2021, 15:39 EDT

Most of the world’s top smartphone vendors were unable to boost their shipment numbers between January and March 2018, taking comfort in rising average selling prices and strong profitability, with mature markets like the US, Western Europe and even China largely to blame for the mobile industry’s increasing fatigue.

According to the latest Canalys analysis, only 30.1 million smartphone units were shipped in Western Europe this Q1, down a whopping 13.9 percent from the same period last year. The smaller Eastern European market actually surged a healthy 12.3 percent year-on-year, to 15.9 million units, which obviously wasn’t enough to put the old continent on an overall growth trajectory.

Europe’s 6.3 percent decline was in fact the largest on record, as both Samsung and Apple registered significant quarterly dips in their shipment figures. The two are still in the lead, with 33.1 and 22.2 percent share respectively, followed by Huawei, at 16.1 percent, after a robust 38.6 percent year-on-year volume increase. 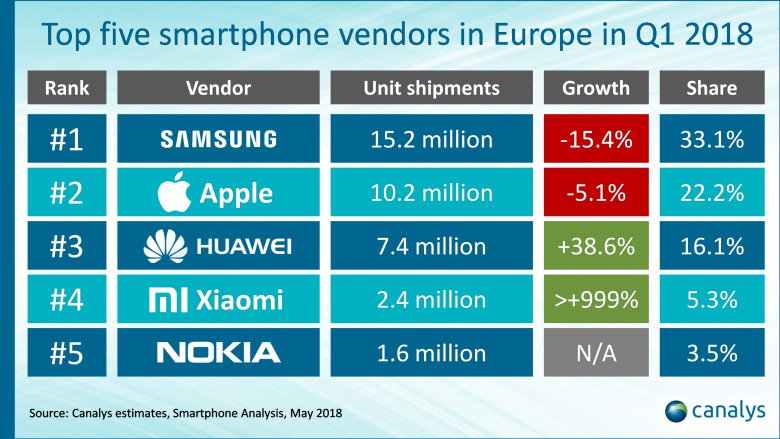 Xiaomi and Nokia wrapped up the top five, despite lacking any sort of regional relevance 12 months ago, while the iPhone X “comfortably” remained the continent’s most popular smartphone model.

Canalys doesn’t spell out the iPhone X’s Q1 2018 box-office numbers, but the Face ID-enabled device apparently accounted for “around” 25 percent of the 10.2 million smartphone units shipped by Apple in Europe in the three months ending March 31. That equates to 2.5 million units or so, which coincidentally was also the combined tally of the significantly lower-cost iPhone SE, 6 and 6s.

Many “smaller players”, like Alcatel, Sony and LG, suffered “substantial declines”, as Nokia and Xiaomi took their places, and Canalys forecasts “several” of these “smaller brands” will leave the market in the “coming years.”

A leaker with a good track record claims that the Pixel 6 and Pixel 6 Pro will be getting at least 4 major Android OS updates and 5 years of security updates.

If you’re looking for a particular Pixel 6 model and it is out of stock, you’ll now be able to join a waiting list.

The new Nokia G300 is a 5G capable device that comes with a Snapdragon chipset and 4GB of memory, and it promises a battery life of up to 2 days.
YouTube 1.8M
Facebook 570K
Twitter 197K
Instagram 133K
RSS