What will the Project Ara market pilot bring smartphone shoppers in Puerto Rico? Get an early preview.
Published 14 January 2015, 12:45 EST

The last few weeks have seen a flurry of newly invigorated Project Ara activity, the Google ATAP effort to create a modular smartphone hardware platform. We heard about the new Spiral 2 system design, the sort of SoC options that would ultimately arrive, and Google’s plans for the next Ara dev conferences. Those get started today, and the first of these conferences is off to a big start, as Google lays out its plans for the continuing evolution of Ara and the first push to get the phone out into the wild for a market pilot program.

The good news: Ara is arriving, and Google intends to get sales started later this year. The bad: you may not have a shot at it unless you’re living in Puerto Rico. That’s the market Google’s selected for its pilot, where it intends to gather a lot of new data about how this modular concept succeeds and where it might need some work. The company’s not talking a lot about pricing just yet, but it has revealed a bit about the sort of options we’ll see: expect these first phones to support ten different module types, with about two or three choices available for each kind.

As this is an unusual device to drop on a user base unfamiliar with modular phones, Google has a lot of local carrier help lined up, and also intends to employ roving “food trucks” that will instead introduce shoppers to Ara and all its options.

The hardware we know now will improve before this market test gets started, and Google’s Ara roadmap contains another step or so between here and that commercial hardware. Next quarter should see the arrival of the Spiral 3 design, which will improve robustness, add LTE support, and deliver the wireless inter-module communication we heard mentioned last month. Even further tweaks will happen before Puerto Rico gets a crack at sales; check out the chart below for details. 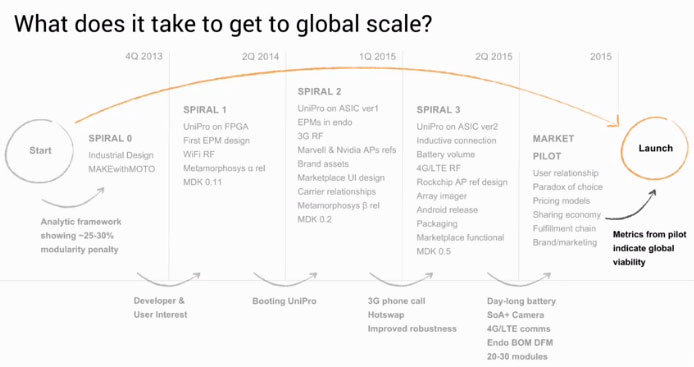