Google’s Project Ara: an awesome answer in search of a question

Motorola’s Phonebloks collaboration, Project Ara, is one of the most compelling phone-hardware concepts we’ve ever seen. But will anyone buy one?
Published 29 October 2013, 14:49 EDT

Originally, that headline was going to be “Project Ara is an awesome solution in search of a problem.” But we thought it prudent to change it, given that Google’s new phone concept might actually solve a few big problems – if it ever attains widespread popularity.

Project Ara broke cover yesterday, and immediately upended the lives of phone geeks worldwide. If you’re not one of those geeks, here’s the deal: the concept, born of Google’s ongoing collaboration with Dutch designer Dave Hakkens, is that of a modular mobile phone. It’s an expansion of Hakkens’s earlier Phonebloks project, which turns the traditional integrated smartphone model on its head. Rather than coming out of the box as one unbroken monolith (often without even a removable battery) as today’s devices do, a Project Ara phone takes the opposite approach. The biggest single component is the endoskeleton -Google even calls the thing an “endo”- but all of the device’s hardware features, from display to battery to camera to CPU, come in the form of independent modules that attach to the central spine. Those modules can be detached and replaced with new ones over the life span of the device as newer, better components become available.

Probably the most important problem the modular concept aims to solve -from Hakkens’s viewpoint, anyway- is that of waste. His video introducing the Phonebloks project starts out with some sobering figures about the toll the mobile-phone industry takes on our environment, discussing for the first 30 seconds just how deep a hole we’ve dug ourselves. It’s only after reminding us that “electronic waste is one of the fastest-growing waste streams in the world” that Hakkens moves on to the advantages his phone brings to consumers. And there are several compelling ones. Have a look-see:

In addition to saving the planet through reduction of e-waste, the Phonebloks concept also brings near-total customizability to the world of smartphone hardware. There are a few predictable examples in the video, such as swapping in a more-powerful camera block if you’re a shutterbug or slapping on a faster processor if you’re a speed freak – but Hakkens is careful to extend the idea to everyone, by featuring an elderly woman who customizes her device by integrating a big battery and a huge speakerphone – and not much else. That kind of broad potential appeal is compelling. This concept is indeed a versatile one, which our own Joe Levi has written about before.

Enter the Google-owned Motorola, which has been working on the notion of a modular phone for “over a year,” according to its blog. It’s Motorola that’s injected new life into the landscape of customizable handheld hardware via that very blog, in which it announces its collaboration with Hakkens and gives us an early peek at what a modular smartphone ecosystem might look like. The visuals are appealing, and it’s easy to see why Motorola and Hakkens decided to collaborate here. 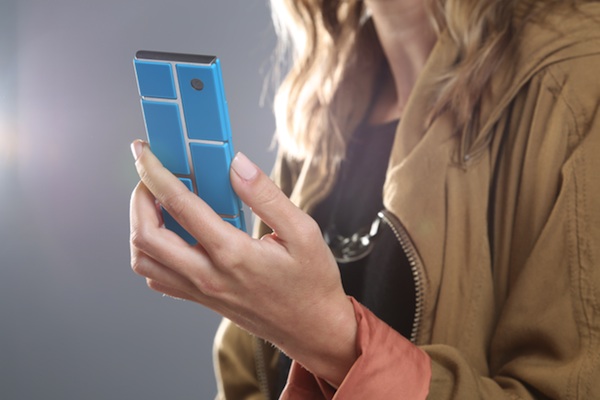 This is pretty exciting stuff no matter where you sit on the geek-o-meter. Customization has always been a critical part of the user experience. The colored cases and flashing antennas for the first widely sold Nokia phones spawned an entire industry of tacky shopping-mall kiosks. Phone skins give modern-day users the ability to give their existing devices new cladding. And Google’s own Moto X raised the bar for customizability in a whole new way. Imagine if Motorola were to take that customization even further, giving you “the power to decide what your phone does, how it looks, where and what it’s made of, how much it costs, and how long you’ll keep it.” The official company blog sure makes it sound exciting – and to a phone nerd like me, it certainly is. Particularly when the company starts throwing around exotic enhancement notions like a slap-on “pulse oximeter.” As we’ve established, I’m a big fan of onboard sensors, and making them hot-swappable takes a good idea and makes it even better. The possibilities are endless.

But here’s the thing. These are possibilities we think about. Our type. Geeks. And while it’s not difficult for a talented marketing department to change the thinking of “normies” to accommodate new and exotic notions, it’s tough to see the masses actually getting excited enough about the modular phone concept to sell enough units to change the world in the way Motorola (or at least Hakkens) wants to. 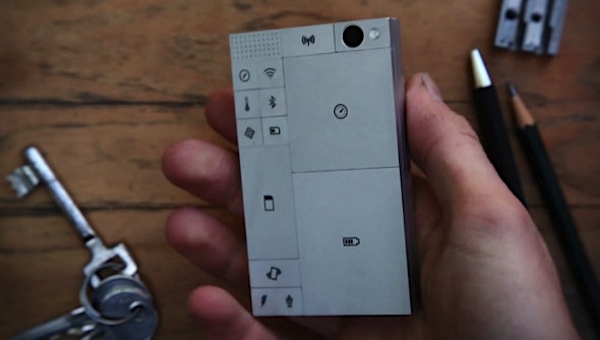 As a few other outlets readily point out, we’ve been here before: the Modu phone didn’t quite pan out, nor did Intel’s Whitebook customizable-laptop concept. Consumers have demonstrated time and time again that they’re willing to make significant sacrifices in exchange for a (pardon the pun) “solid” overall experience, which is why integrated devices like iPhone, Galaxy, and Lumia products continue to sell by the millions. Given the total dominance of the existing model, it’s hard to see how Motorola will bring enough compelling advantages to change that buying behavior – especially given the somewhat clunky-looking concept hardware the company is showcasing today.

I don’t mean to say that change is impossible: personally, I’m a big fan of ideas and products that shake up the status quo. Plus, considering Google’s apparent willingness to continue losing money on Motorola, I think the combined brands are better situated that most to make a push of this size. In many ways, Project Ara is a fulfillment of some of our wildest wishes from the early days of Google’s Motorola buyout.

Again, it’s the consumer side I’m concerned with, the real-world feasibility. Because in my experience, people haven’t really been asking for something like this. Instead, they’ve been demanding thinner, sleeker devices – and Project Ara is almost guaranteed to make phones thicker, at least at first. And while Motorola continues to push the Moto X based on its category-leading customizability, it’s still too early to tell whether that experiment can ultimately be called a success.

It’s not quite clear, in other words, that people are interested enough in interesting concepts like this. Personally, I’m holding out hope that Google uses the same tactic with Project Ara that Microsoft has with Windows Phone: throw money at the thing until it’s forced into the market. But more than that, I’m hoping that consumers as a whole prove me wrong – that enough of them will see the benefits of this innovative new approach to phone hardware. I’m just not holding my breath.

The iPhone 12 series will look almost identical to the iPhone 11 trio from the front and back, down to the camera lens layout, except for the flat edges.