Huawei phone spotted on GFXBench: is it the Mate S2 or the 7P?

A benchmark log of the phone doesn’t show a significant spec jump from previous releases and a clean version of Android Nougat being run.
Published 10 August 2016, 14:56 EDTUpdated 14 August 2016, 23:22 EDT

Huawei was not done when it released the P9 earlier this year. Supposedly, it still has plans for a Mate S sequel, a “Nexus” 7P and a Mate 9, too. All that pressure has us wondering more and more about this GFXBench log that we’ve picked up, thanks to Telefoonabonnement.

The specs are pretty ordinary for a Huawei Mate phone: a nearly-six-inch full HD screen with a HiSilicon Kirin chipset of some sort, — GFXBench was only able to detect a set of Cortex-A53 cores — perhaps either a tweaked Kirin 955 or an all-new 960. There may be 4GB of RAM and 64GB of storage along with a 12-megapixel main camera (all the rage these days) and an 8-megapixel unit out front. 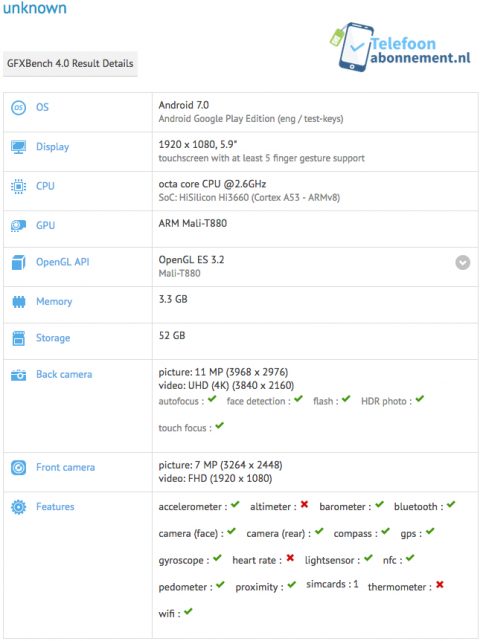 Here’s the thing that gets our goat, though: the phone’s running Android 7.0 Nougat, clean. No EMUI or anything, just a “Google Play Edition”. Whether that’s subject to change with version 5.0 of Huawei’s skin due out soon or maybe some sort of proof that the Chinese manufacturer does indeed have another Nexus phone up its sleeve, we have no clue.

Another clue as to this be the 7P? Previous major Mate phones have stuck strictly to a 6-inch screen size. This phone has a 5.9-inch screen — something that definitely would not fit the chassis of an Honor 5X.

Whatever this phone ends up being, all three phones we’ve just mentioned are set to be released in this half of the year. We’ll have to do some comparing and contrasting and thoughtful discussion until then.