Would you use a smartphone with a physical keyboard again?

Portrait QWERTY smartphones were everywhere in 2006, but the form factor is now nearly extinct. Read why this is one form factor we don’t want to see die.
Published 31 May 2013, 14:08 EDT

I got my start in the tech industry with BlackBerry. I was a fiend. I’ve owned dozens of different models, and I knew my way around the software like the back of my hand. I made my own themes in my free time, and was constantly flashing unofficial software and on the prowl for new apps and games.

Above all, when BlackBerry failed to innovate and change direction with the rest of the smartphone market, there was one feature that I found unbelievably difficult to give up: the physical keyboards.

BlackBerry was – and still is, for that matter – renowned for its second-to-none keyboards. Everything from the chiclet keyboards on the entry-level Curve models to the fretboard Bold keyboards were widely accepted as the best physical QWERTYs you could get on a smartphone. Even today, I have yet to a mobile typing solution I liked better than the Bold 9000 and Bold 9900 keyboards.

And even for years after BlackBerry’s decline had started, I had trouble moving on. I carried two devices every day, an Android phone and a BlackBerry – the best of both worlds. Eventually, however, I decided it was time to move on. I upgraded my line to an iPhone and, surprisingly, had no regrets.

Since then, the only physical smartphone keyboards I’ve used have been on review units and the few (poor) BlackBerry-esque Android phones from Motorola – DROID Pro, Pro+, XPRT, Admiral, etc. As valiant as its efforts were, Motorola simply could not replicate the quality of BlackBerry keyboards. They weren’t even in the same league, much less the same realm.

Not to mention, soft keyboards have come a very long way in the last three years. Swype, SwiftKey, and even the stock Android 4.2 keyboard have trace typing with word prediction software. This sort of software has made touch screen typing, which was once an alienating, arduous process, a breeze.

Because of this and the mostly poor performance of every non-BlackBerry portrait QWERTY, the form factor has become a rarity.

Earlier this month, I wrote a nostalgic piece recounting all the form factors that have fallen to the wayside. Sure, some may still exist in niche markets around the world, and some companies may have a few form factors on life support. But for all intents and purposes, everything but the basic candybar slab is effectively dead.

Of all the form factors I covered, there is really only one near extinct form factor I even remotely miss: the portrait QWERTY.

When BlackBerry announced its new hardware, the Z10 and Q10, I was not convinced Thorsten Heins was steering the company in the right direction. After all, this is 2013. Who wants a QWERTY keyboard anymore? I would have preferred to see BlackBerry release a few different touchscreen models to show the world it was ready to move forward, not dragging some of its past along with it everywhere it goes. 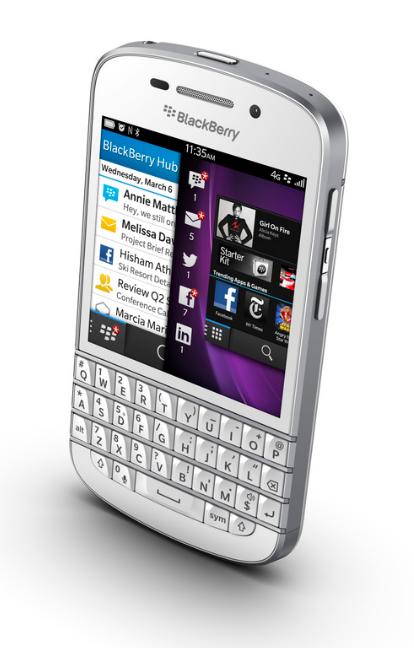 Yes, even though I thoroughly missed BlackBerry portrait QWERTYs, I honestly believe the reception of the “new” BlackBerry would be better had the company made such a bold move. (Pun most definitely intended.) It can aways revisit the QWERTY in the future.

Alas, it’s done, and I’m sort of eating my words. The Q10 has slowly started launching around the world. And the closer it gets to launching in the U.S., the more I want to get my hands on one. The Z10 really did nothing for me. There are hundreds of candybar phones that do pretty much everything better than the Z10. But the Q10 speaks directly to me, to my roots. It’s sort of like your favorite video game re-launching on a new console. It’s impossible to say no – just like I couldn’t turn down Grand Theft Auto III when Rockstar released it on Android.

Would I use a smartphone with a portrait QWERTY smartphone again? Absolutely.

The problem is, I’m not convinced BlackBerry 10 is the answer, and there’s not a non-BlackBerry physical QWERTY I would want to use. I hate to speak in hypotheticals so often, but earlier this week, we all shared our individual ideas of what the perfect smartphone would be. And while I said my perfect smartphone would be a beefed-up DROID DNA with a graphene battery, a Q10 running stock Android 4.2, with a better camera, would be a very close second.

I have such a pent-up hankering for another QWERTY keyboard, I’m not sure I can resist at least giving the Q10 a test drive.

What say you, readers? Would you go back to a physical QWERTY phone? Or do you value your precious pixels too much to waste display real estate for a permanent keyboard?

The ability to adjust playback speed on Netflix is soon coming to the iOS app and the web client as well.

The Galaxy A42 is said to be Samsung’s cheapest 5G phone.