Like mobile technology? Love the sound of our voices even more than we do? Then please – vote for the Pocketnow Weekly podcast in the 2013 Stitcher Awards!
Published 20 December 2013, 20:00 EST

Update: There are only a few more days left to vote, folks. We’re starting to see some progress already (see below), and we thank you for all your efforts so far. Please keep the clicks rolling in, and give a listen to the latest episode of the Weekly, posted just a few minutes ago!

You may not know it, but each week thousands of people tune in to hear the vocal stylings of the Pocketnow team as they discuss the happenings in mobile technology. The audio-only Pocketnow Weekly podcast started in the summer of 2012, replacing the defunct PocketCast as the official tech podcast of Pocketnow. We’ve recorded from foreign lands and hosted numerous luminary guests – and 73 episodes later, we haven’t missed a week yet.

But for all its merits,  the Pocketnow Weekly is still one of our smaller projects here at Pocketnow. It takes a lot of work to put it together each week -sometimes longer than a review-length video- but its audience is still only a fraction of our YouTube subscriber base, and merely a drop in the bucket compared to our overall readership. While we’re very thankful to the thousands who do tune in every week, we, like Oliver, want some more.

That’s where you come in. Stitcher, one of the podcasting networks that hosts the Pocketnow Weekly, is running its second-annual Stitcher Awards, and we’re engaging in this shameless bout of self-promotion to ask you to vote for us! 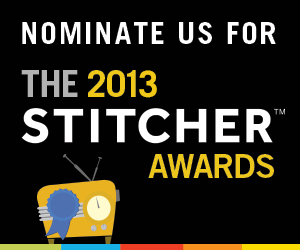 Vote for us here!

It’s a pretty simple thing: you click that subtle link above, scroll down to the “Technology” category, and type in “Pocketnow Weekly Podcast” (it’ll auto-complete after “Pocketnow”). You can vote for us once per day until December 24th, with voting starting on December 31st – if we’re nominated. The full set of rules are available at Stitcher’s contest site.

Unfortunately we can’t offer any material incentive for voting on our behalf, but your support will mean a stronger, healthier podcast – and that’s a beat we can all dance to, amirite?

Thanks for your consideration, and thanks to those listeners who’ve stuck with us all along. We’ll announce the contest on the next few episodes of the Pocketnow Weekly as well – and we’ll ask you to keep spreading the word via conventional channels as always. If you’re wondering what all this podcast nonsense is about in the first place, check out a recent episode featuring Taylor Martin and me talking LG G Flex and Moto G with special guest MKBHD!