You’ve nominated us for a Stitcher Award; now we need your votes to win!

You’ve propelled us to a nomination with your votes (because you’re awesome); now help the Pocketnow Weekly podcast win Best Tech Show of 2013!

Last month, we called in a favor from the listeners of the Pocketnow Weekly podcast: we asked you to vote for our nomination to the 2013 Stitcher Awards. And like the loyal and dedicated fanbase we knew you to be, you brought us there!

On behalf of all those who’ve worked on the show over the year-plus we’ve been on the air, from the traditional Pocketnow crew to our occasional special guests, I thank you very much for your votes. As a result of your tireless campaigning, the Weekly stands alongside some truly great contenders in the race for Best Tech Podcast of 2013. It’s an honor to be counted among them.

But as most of those shows have a much longer history (and a much larger audience) than our humble mobile-only podcast, Pocketnow needs your help once again! If we’re to win the award for Best Tech Podcast of 2013, we need more of your votes. And we need them every day until voting closes on January 13th!

Voting is easy. It’s literally two clicks away. All you need to do is visit Stitcher’s awards website at the following link:

After hitting the little Facebook “Like” button (we know, annoying), just scroll on down to the Technology section and click on the logo for the Pocketnow Weekly: 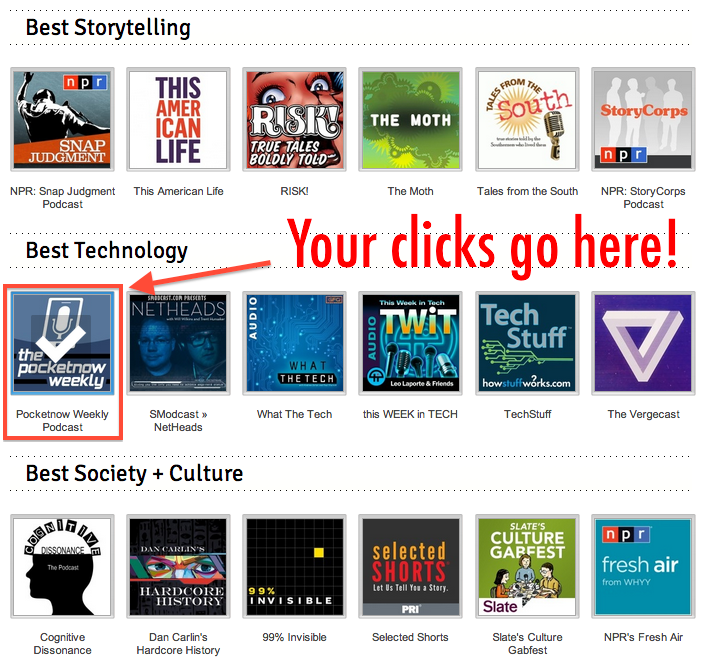 Except for one thing: we need you to do it once a day until January 13th. Because it’s one of those contests that allows you to vote once per 24-hour period, and since we’re (once again) a smaller show than our competition, we really need you to turn out as often as possible for this one.

We know that’s a lot of trouble to go through even for a show you enjoy, so it’s fair to tell you why we’re invested enough in winning this competition to solicit your votes so aggressively. It’s not just for an ego boost or bragging rights or anything like that (though that would be nice). Instead, we hope to win mainly in order to make the Weekly more visible. We’ve been very proud of our audience growth over the past 76 episodes, but it takes a lot of time and effort every week to bring the show together … and, frankly, we need a bigger audience to continue to make it worth our while.

Also, on a personal note: Stitcher is the first podcasting app I ever downloaded. I first used it over four years ago, before I got into this business, to stream some of the very podcasts we’re now nominated alongside. That in itself kind of blows my mind, and winning would be an honor beyond compare.

So please, consider lending us your votes, once a day, for the next eleven days. Please forgive the endless barrage of tweets and Facebook posts you’ll see for the same period. And, again thank you for getting us this far; we wouldn’t have a podcast if we didn’t have an audience, and you’re the best one a disembodied voice could ask for!

While we wait for the Lenovo Legion phone, here are the best gaming phones in 2020 we have seen so far.