See what’s next for Google’s tablet lineup, as the company gives us an early look at the Pixel C Android tablet.
Published 29 September 2015, 13:14 EDT

It sure looked like we knew what to expect coming up to today’s Google event: some new Nexus phones, Marshmallow news, and some Chromecast hardware. And we haven’t been disappointed by today’s announcements. But yesterday we picked up on one more possibility, with word that Google could also have a new tablet in the works. And while we were told it wouldn’t be launch just yet, we heard that this so-called Pixel C might make a brief appearance today. Sure enough, that’s just what’s happening, as Google gives us an early look at the Pixel C tablet.

The Pixel C, as rumored, runs an NVIDIA Tegra X1 SoC, paired with a desktop-class Maxwell GPU. It gets a 10.2-inch display with an unusual aspect ratio, going with about 1.42:1 for a screen that mimics the shape of a sheet of paper – with a resolution of 2560 x 1800. There’s 3GB of system memory, and options for either 32GB or 64GB flash storage.

How about those keyboard options? The optional Pixel C keyboard attaches over Bluetooth and offers a 18.8mm key pitch. It charges inductively right from the tablet itself when closed, so most users will never have to think twice about keeping it powered.

Pricing will start at just about $500 for the Pixel C itself, with the keyboard adding an extra $150 to the bill. There’s no confirmed launch date just yet, but Google says to expect it in time for the holiday season. 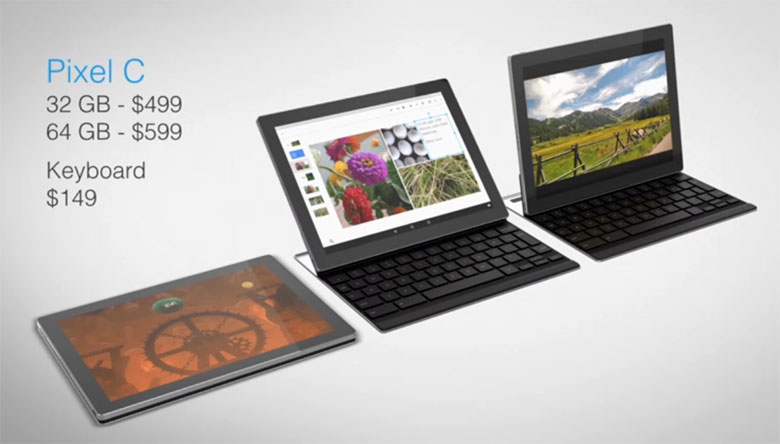 The power button and SIM slot have been moved to the top and bottom, while volume controls will likely rely on capacitive input alongside the curved edges.
YouTube 1.8M
Facebook 569K
Twitter 196K
Instagram 133K
RSS