This is when Google is announcing the Pixel 3

A recent influencer marketing collaboration offer contains the alleged date when Google will be announcing the Pixel 3 phone for this year.
Published 06 August 2018, 00:30 EDT

October is when Google usually unveils the Pixel phone (or phones). It happened in 2016; it happened in 2017; it will most likely happen in 2018 as well. Thursday, October 4, 2018, is the date that is referenced in a FameBit listing, with a rather clear wording: “the pixel 3 phone is launching October 4th, 2018″.

FameBit is Google’s own YouTube influencer marketing platform, where brands and creators/influencers meet to shake hands on getting paid to promote products and services. Such a listing exists for the Pixel 3, looking for Canadian creators. Since there’s no way in verifying whether the people behind the listing are actually Google or not, we’ll keep skeptical, just a little bit.

Everything else looks to be normal, with the offer itself appearing legit. Combine that with dates for previous Pixel phones, and this might be a good indication of what to expect as Q4 kicks off. Until we hear otherwise, we’ll stick with October 4, 2018.

As far as the specs of the upcoming Pixel 3 XL are concerned, a recent benchmark result seems to confirm Snapdragon 845 and 4GB of RAM on-board. There will apparently (so far) be a Just Black and a Clearly White version. 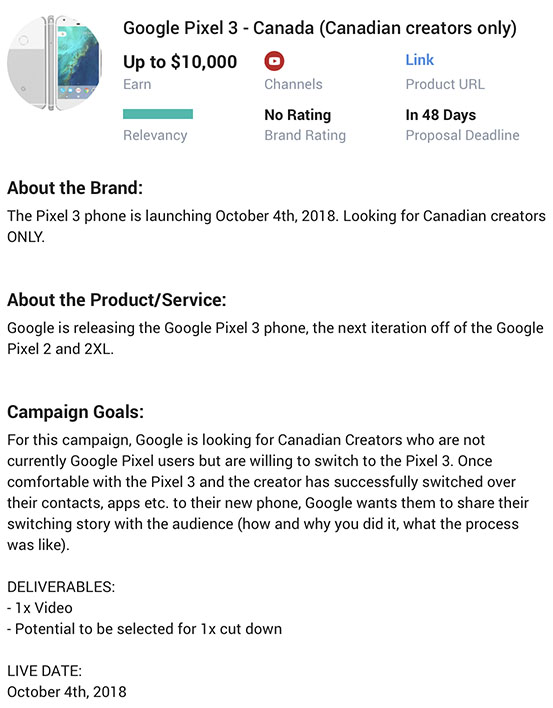