It’s been over two years since the debut of the first Pebble smartwatch. Join us for our first look at the next generation, the Pebble Time!

It was over two years ago that we first strapped on the Pebble to get a taste of what the redefined wristwatch might be like – and after a quick jaunt with its metallic cousin the Pebble Steel, we’re ready to try out the true next generation: the Pebble Time.

Despite the significance of this sequel, the Kickstarter-funded Pebble Time comes in much the same packaging as the original: a nondescript, Postal Service-ready cardboard box that tears open to reveal the watch itself, a charging cable, quick-start literature … and not much else. 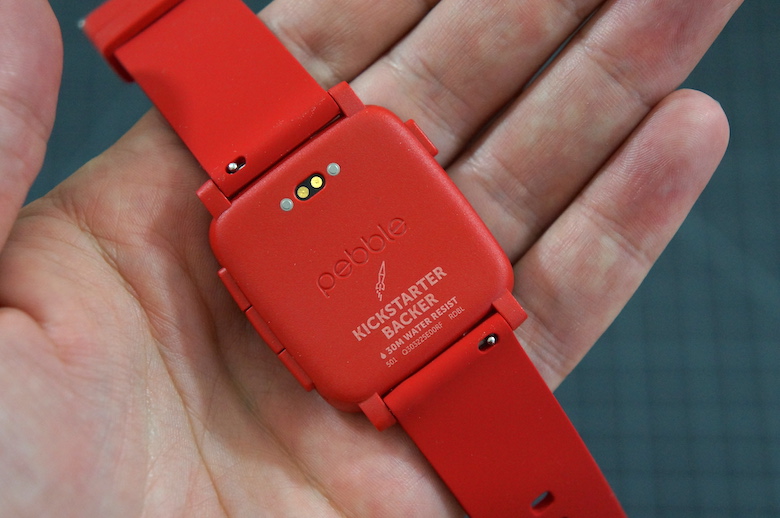 If the packaging has stayed constant, the Pebble itself has definitely matured in this iteration. While there’s an awful lot of bezel between the ends of the e-paper screen and the edges of the casing, this watch is actually quite a bit smaller than the first-gen Pebble in some dimensions – impressive considering its 30-meter water resistance. And it feels better than the original in almost every respect; it’s lighter, slimmer, and higher-quality than it might appear in photos. Especially surprising is the stretchy silicone band, which feels almost impossibly soft against the skin and contains both quick-release latches for quick swapping and a nicely finished buckle-type fastener. The charging cable is nicer too, with a more robust construction and stronger magnets to hold it against the Pebble Time’s aft charging port. The company claims 7 days of uptime between charges; we’ll see. 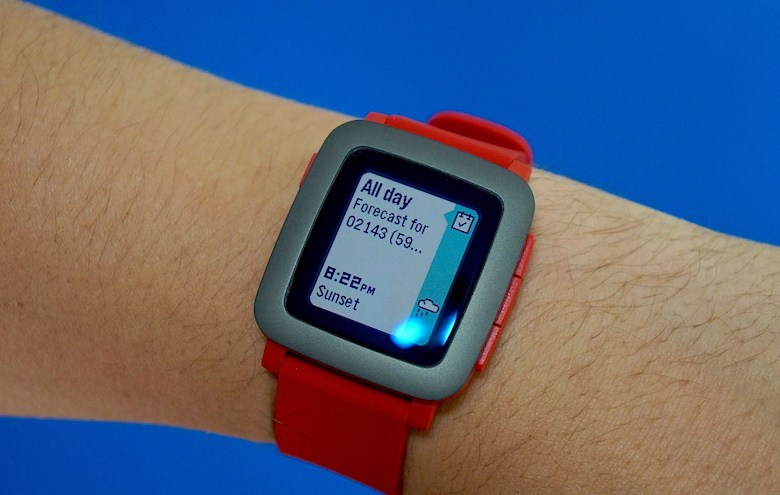 The new watch retains Pebble’s four-button control interface but there’s lots of new stuff here too: a microphone for one thing, a color e-paper display for another. And it’s also just about as straightforward to set up as its forerunner, at least on Android: follow the link on the screen, download the app, and a few taps later you’re checking notifications, changing watchfaces, and surfing the new “timeline interface” on your wrist. This ain’t no WatchOS, and it’s no Android Wear either: this is custom smartwatch software from the company that jump-started the wearable revolution in 2012, and I’m excited to see how well it stacks up against the competitors that have sprung up since.

That verdict will have to wait for the full review; meanwhile, check out the unboxing and hardware tour below! If you’ve got questions burning a hole in your soul, drop them in the comments and we’ll do our best to answer them when our Pebble Time review goes live later this month!