SurveyMonkey is claiming that Pokemon GO is pretty much done riding its high. At least its initial one, anyways. Where does it go from here?

Peak Pokemon GO happened last week. At least in the US.

How does SurveyMonkey figure that? Its Intelligence unit tracked the app’s daily active users and compared it to daily download rates and the internet’s search awareness for it.

In terms of usage, more than 25 million user packed in on the most active day, Sunday, July 14. Numbers were about steady the day before and the day after before the inevitable slide followed that week, dropping to about 22 million users on July 20. 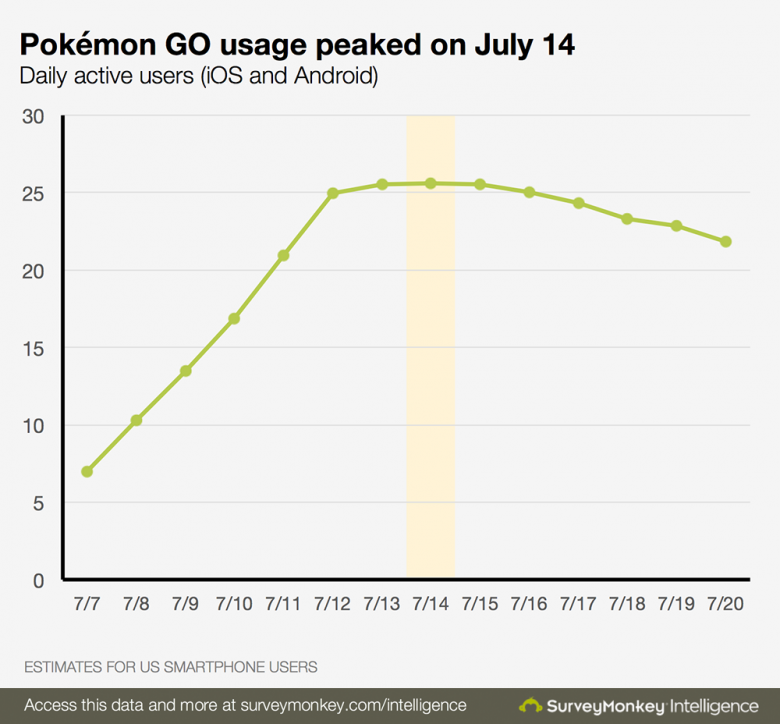 Download rates were highest the day after launch day, July 7, at nearly 6 million takes and it was only closely-matched on July 12. July 20 saw something in the neighborhood of 1 million downloads.

Google search trends for “pokemon go” peaked on July 16 with the most queries spread between that date, July 13 and July 14.

Of course, every good app has the initial boom and bust, but, as SurveyMonkey points out, the days-long span this peak took to happen is way shorter than the precipitous paces of Candy Crush and Draw Something.

Ultimately, it’s the sustaining numbers that we’ll have to track over time that should frame Nintendo’s biggest mobile effort so far as an all-out success or an overhyped failure. Besides, the global numbers for the game — much less the Japan release — are just starting to add on…