If you want to unlock a Pandora Premium music streaming session at no cost, all you need to do is watch a short video ad.

Internet radio is not as big now as a few years back, and even industry heavyweights like Pandora need to adapt to a constantly changing, increasingly competitive music streaming environment dominated by Spotify and Apple Music.

To that end, Pandora Premium was released earlier this year, reaching one million paying subscribers after a little over six months of unlimited on-demand service availability. Not a bad start for yet another such app, but Pandora is definitely gunning for an accelerated growth rate in the near future, considering its impressive reach.

There are more than 70 million people active each month on the company’s free and Plus service tiers, with the latter group spending only $5 a month, compared to $10 for a Premium listening product.

In a bid to entice as many of these users as possible to become high-paying customers, Pandora is today introducing a new type of ad-supported music playing experience. Instead of just getting access to radio stations built around favorite songs, artists and genres, you can now sample Pandora Premium’s full feature set in exchange for watching a 15-second commercial. 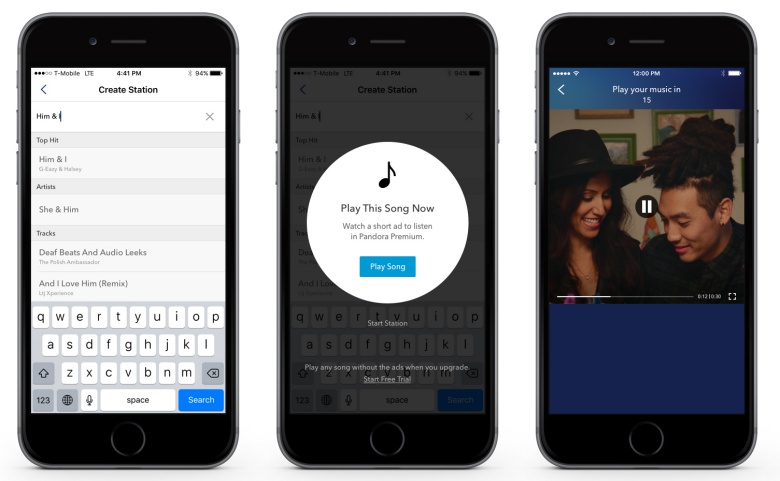 That’s right, unlocking a “premium” on-demand listening session requires no upfront payment whatsoever, although it’s unclear how long the free “session” will last. It’s not just one track from a massive library of roughly 40 million, that’s for sure, and Pandora’s Director of Product Management guarantees it’s “more than people expect.”

It probably depends on how often you try out the new sampling technique, but either way, it could be an effective strategy to drive those Premium numbers up and provide stiff Spotify competition. At least on iOS and Android phones, for starters.