Chat Heads are Facebook’s new big thing for mobile messaging. Here are some other services we’d like to see with a Chat Heads-like option!
Published 17 April 2013, 13:55 EDT

This past Friday, Facebook pushed out the new Facebook Home application to a select few Samsung and HTC Android devices. The HTC First officially launched, and the Facebook Messenger application was also updated. In all of this, the public finally got their hands on easily the best service – period – that Facebook has managed to produce. Chat Heads.

Last year, I wrote a piece about an application for Android called LilyPad HD, a floating chat client for Google Talk, Yahoo, AIM, MSN, Jabber and Facebook. Simply download and run LilyPad and your instant messages can be accessed from atop any application.

LilyPad was built on the very same principle as Samsung’s Mini Apps Tray from a TouchWiz UX update to the Galaxy Tab 10.1 in 2011. True multitasking in a mobile platform.

I’ve talked about floating – or windowed – applications on Android for as long as I can remember. And LilyPad, a more rudimentary version of Facebook’s Chat Heads, was the first truly useful free-floating application I had come across in April of last year.

Floating applications alone, however, aren’t enough. And a quick comparison between virtually every other floating app and Chat Heads shows us exactly why. 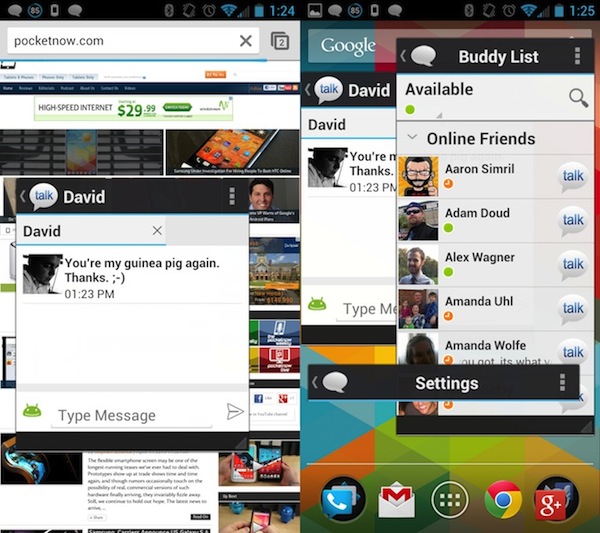 On a small device like a smartphone, or even a tablet, display real estate is extremely important and, in many cases, cramped as it is. Having floating applications everywhere dilutes the real estate, and being able to quickly minimize apps with a single touch is vital. On LG’s Optimus G Pro, for example, there is a slider on the QSlide apps that adjust their transparency. But having a partially transparent app floating atop a fully opaque app is strange, to say the least. Even resizing the QSlide apps down to their smallest doesn’t make them any more useful. And the only way to minimize Samsung’s Popup apps is to close them.

LilyPad gives the user the option to minimize conversations, buddy lists and the settings window. But, at best, it’s clunky, and on anything but a tablet, the minimized bar is still too large and gets in the way. In other words, it’s generally more trouble than it’s worth.

Chat Heads is another story. A single tap on the Chat Head to expand, another on the Chat Head to minimize. And if it’s in the way, flicking the app will shoot it to the other side of the display or up and down the current side. It’s out of the way, minimal and extremely easy to re-open.

Because of how seamless and lightweight the chat software is, we can’t help but hope other companies and services take a page from Facebook’s … book. And we have some services in mind that we’d love to see have their own Chat Heads-like option.

Facebook’s Chat Heads only supports Facebook messages and SMS. But the concept can easily be applied to practically any other chat or SMS service, such as Google Talk, Google Voice, Kik, GroupMe or the other multitude of chat applications on Android. Even Gmail or third-party email clients could benefit from popup compose windows.

Having the ability to carry on a conversation, unobtrusively, while doing other things on your phone simply makes sense. Smartphones are communication tools, and jumping back and forth between applications to send a message then continue browsing the Web is painstakingly annoying. In fact, that could be said for any of the application types below. 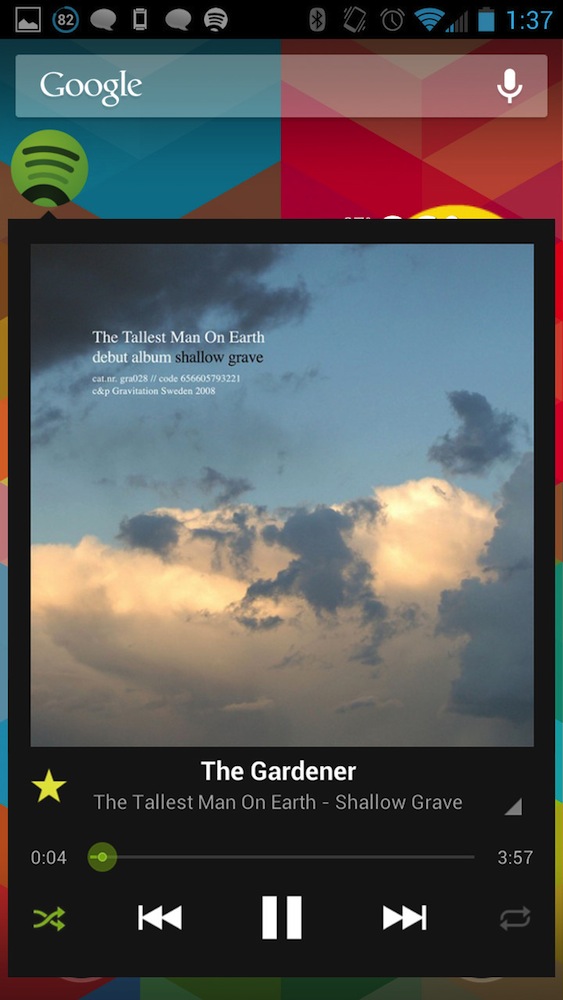 Just as I would love to have the faces of my Google Talk friends floating around my display, I wouldn’t mind having a bubble for various multimedia applications, as well. Spotify, for example, is one of the most used applications on any of my mobile devices. I constantly have to jump back into the app to change the song, pause or switch playlists.

Keeping this as a floating app would save me the trouble of having to keep jumping back and forth. And as our own Michael explained, having lyrics or other information appear in the “Spotify Bubble” would make it more useful than ever.

But there’s no reason it should be limited to Spotify. Pandora, Google Music and even my favorite podcasting app, Pocket Casts, should be given the Chat Heads treatment, too. Floating, unobtrusive multimedia applications are near the top of our want list for a Chat Heads-like implementation.

One of the worst parts of taking notes, adding calendar entries or making to-do lists is having to constantly reference different sources. For example, if you’re taking notes based on information on a Web page, you have to copy a segment of text, switch to the note app, paste, jump back into the browser, copy more text, jump back into the note app and so on and so forth.

I find myself having to do this with calendar apps (when copying my schedule over to my personal calendar), making lists and referencing Web pages for notes.

Any of these three types of applications would be perfectly suited as floating bubbles. To name a few, Evernote, Agenda Calendar and Any.DO need the Chat Heads treatment.

Chrome and other browsers, of course

A free-floating browser window isn’t anything particularly groundbreaking. But there’s definitely utility in turning the table and referencing a Web page from within a note taking app, or looking something up while publishing a new post on Google+ or Facebook.

Similarly to Chat Heads, it would be nice to see Chrome and other Android browsers adopt the ability to pop out a single Web Page into a floating bubble.

Just like chat apps, I often have conversations on social media. After I post something, I get comments and endless notifications. And Twitter is often nothing more than a giant, public chat room. Being able to pop out Falcon or Google+ would be incredible. And even the ability to open a single status into a bubble of its own would be a neat adaptation. The possibilities are literally endless. 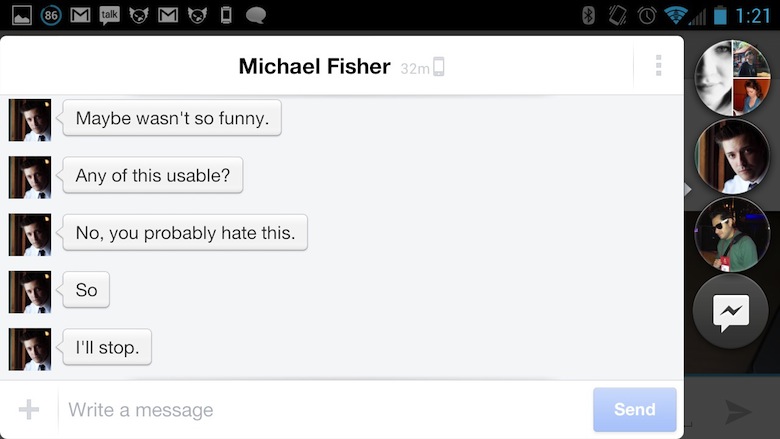 I could write all day about various use cases for a Chat Heads-like app for practically anything. In fact, I would love to see Google make it a staple Android feature with the ability to have a floating bubble for any application type. There’s no reason any ol’ app shouldn’t be able to float freely. This is one of the many defining features of Android, true multitasking. It would be great to see Google capitalize on this and make lightweight, floating applications its new thing.

Alas, I’m not holding my breath.

No less feel free to share what other types of applications or services you would love to see with a Chat Heads-like bubble for quick and simple multitasking. Sound off below!

With lower price points as the focal point, let’s take a look at these two in our comparison. This is the iPhone SE vs Pixel 3a.