Believe it or not, Huawei has been unthroned in its own homeland by local arch-rivals OPPO and Vivo as far as Q3 smartphone sales go.

They say a prophet is not without honor save in his own country, and while Western mobile consumers continue to warm up to both mid and high-end Huawei devices, the world’s third largest smartphone manufacturer is surprisingly losing steam domestically.

The former Chinese market leader had to settle for a disappointing bronze medal in Q3 sales, although technically, its numbers still surged year-on-year. But they only did so by 4 percent, whereas OPPO reported an 82 percent increase in local shipments compared to the July – September 2015 timeframe, and Vivo somehow pulled off an even greater feat, leaping 114 percent. 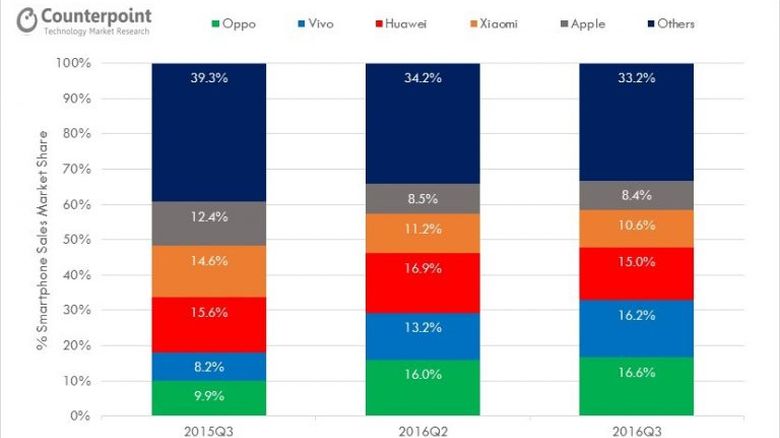 Xiaomi and Apple wrapped up the top five after registering ominous 22 and 27 percent respective year-on-year declines in shipment figures, but the Mi Note 2 and iPhone 7 are expected to put the two back on the fast track to growth.

Huawei could also take advantage of Samsung’s Galaxy Note 7 debacle and regain some share from OPPO and Vivo in Q4, at least as far as the high-end segment is concerned. The BBK-owned brand duo, of course, mostly specializes in affordable models strongly advertised offline, the latter part still looking like Xiaomi’s Achilles’ heel.