Learn more about the Oppo N3, as the company’s CEO has decided to visit Weibo and spill some of the reasons why you’ll find this device to be hot.

Oppo has done a very good job at remaining under the flagship radar over the last couple of months. The Oppo N1 was clearly one of the best innovations of last year with its swivel camera mechanism and the option for you to buy it running CyanogenMod. The same can be said about the Oppo Find 7a, which is still one of the most powerful flagship smartphones of the year. Oppo’s October 29 event is all about the new N3, and today we see some extra teasers of what to expect.

Oppo’s CEO has taken the time to visit Weibo and give us a glimpse of why the Oppo N3 will be hot. For one, we know that the N3 will sport a 16-megapixel camera, which might not wow many of you who care about the spec race, but that’s not the whole story behind the camera. What’s hot here is the sensor, which will be significantly larger than almost every competitor in the market at 1/2.3-inches. This will reportedly allow better quality images, though that isn’t something we’ll be able to confirm until we review the device. The graph shows us a full comparison where we see the Galaxy S5 and Galaxy Note 4, which sport a 1/2.6-inch sensor (28% smaller), and the HTC One M8 and iPhone 6, which sport a 1/3-inch sensor.

So far the specs that we know of also mention a Snapdragon 805 processor, a 5.9-inch 1080p display, 3GB of RAM and a camera rotation of 206 degrees along with the design materials we saw yesterday. We’ll learn more about this device at its event in Singapore on October 29. 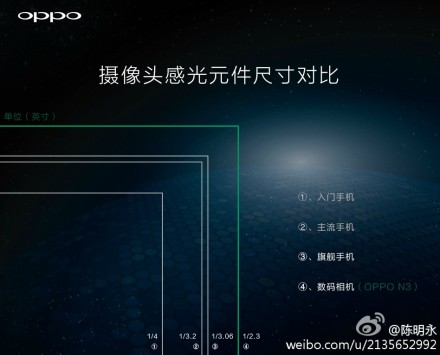