The best of OnePlus is powered by the worst of Qualcomm – but it doesn’t matter. See why the OnePlus Two Snapdragon 810 marriage isn’t doomed to failure.
Published 21 July 2015, 16:32 EDT

Qualcomm’s Snapdragon 810 is one of the most controversial pieces of silicon in recent memory. The OnePlus Two is the imminent sequel to one of the best-reviewed smartphones of the past few years. And very soon the two will come together to produce one of the most anticipated products in mobile.

Then it’s going to get trashed in the press, because it “overheats.” And then I’m going to roll my eyes so hard they get stuck.

To be fair to the very smart folks who’ve written very smart articles on the subject, Qualcomm’s Snapdragon 810 definitely isn’t the best system-on-a-chip the company has ever made. Ars Technica’s Andrew Cunningham writes that the 810 is essentially a “stopgap measure,” a rushed product meant to provide a quick 64-bit response to Apple’s A7 chip. In the same piece, he provides data that indicates the 810 does indeed suffer from a thermal throttling issue –a deliberate reduction in processing power– that happens “so early and so severely” that the smartphones it powers exhibit slower performance. You can see this performance gap in action in a video called out by PhoneArena. And the thermal issue persists even in the newer v2.1 build of the SoC, according to Joshua Ho of Anandtech: “both variants of the Snapdragon 810 still see the unfortunate characteristic of ultimately forcing all threads off of the A57 cluster to stay within TDP limits in high load conditions.”

Did you understand that last sentence? If not, congratulations: you can probably live with a smartphone powered by the Snapdragon 810. Because unless you’re really into benchmarks, you’ll almost certainly never notice the 810’s deficiencies. How do we know this? Because we’ve spent a lot of time with phones powered by the 810.

Just like the Snapdragon 810 that powers it, the One M9 isn’t the finest example of what HTC is capable of. Its design, while beautiful, is a little too predictable; its camera is underwhelming; its BoomSound isn’t the differentiator it once was. But the massive performance drain we feared never materialized:

The One M9 got no hotter than any other phone during normal, low-impact use; only graphics-heavy games like Sky Gamblers Air Supremacy could get the casing temperature to rise, and even 30 minutes of flying only got the chassis up to 99 degrees Fahrenheit (37.22º C). A half-hour of Asphalt 8 immediately afterward managed to push it just past 103º F (39.4º C), but that’s still far short of what we’ve seen on some older devices. And regardless of phone temperature, Sense was as responsive as ever. Version 7 remains one of the snappiest Android skins around, with no apparent ill effects from making the jump to the Snapdragon 810.

To say we were surprised is an understatement: after all, we’d had such a rough time on our first pass with the LG G Flex 2 that we initially blamed the silicon for its software woes. But once LG had a few more weeks to tweak its skin, the G Flex 2 became a much more enjoyable smartphone to use. And while Sony is reportedly working on a software fix for some overheating issues apparently plaguing its 810-powered Xperia Z3+, our own Editor-in-Chief hasn’t seen anything of the sort on his review sample. He reports that his Z3+ “rarely” exhibits stutter or lag in everyday operation, though it does heat up during use. 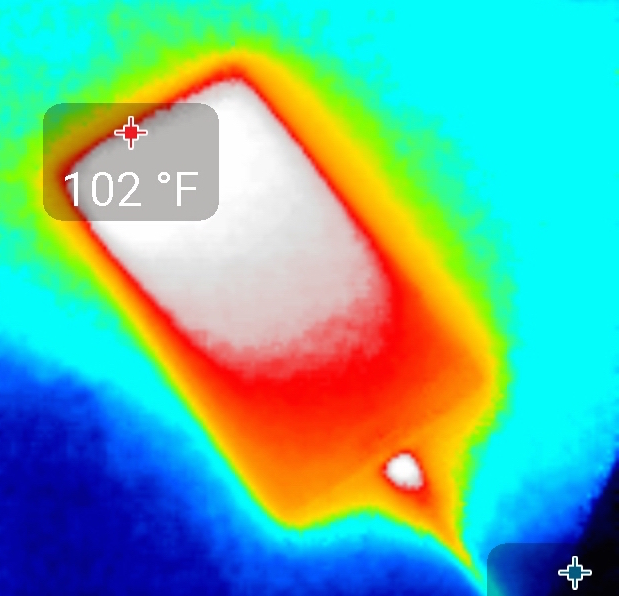 Know what else heats up? Most smartphones and tablets. The Galaxy S6 is often touted as an anti-Snapdragon success story, but put it to work for a few minutes, and you can feel its (otherwise excellent) Exynos 7420 processor trying to burn its way through the glass alongside the power button. Same with Sony’s Xperia Z3. Our Tegra-powered Nexus 9 feels the burn after a short period of heavy use. Our Lumia 930 gets almost too hot to hold when running the Windows 10 preview. And hey, fun fact: that camera-crash problem with the Xperia Z3+ that Sony’s blaming on the Snapdragon 810? Yeah, it happened on the Z2, too. A mobile device doesn’t need a Snapdragon 810 to get hot.

I don’t mean to insinuate that I’m completely confident in OnePlus’s choice to use the Snapdragon 810; from a purely pragmatic perspective I might have preferred the more conservative choice of the Snapdragon 808 (which is working out pretty well for the LG G4) or one of the Intel chips powering the excellent ASUS Zenfone 2. And I’m not criticizing those who rightly take Qualcomm to task for rushing out a processor that doesn’t live up to the company’s solid record. From a technology perspective this is fascinating stuff, and it’s ripe for investigation.

But from a consumer perspective, the Snapdragon 810 brouhaha is almost totally worthless.

To really bring the 810’s deficiencies to light requires that you go looking for them; it requires that you repeatedly run synthetic benchmarks to force the chip to throttle itself so you can measure the performance hit. It’s like digging for dirt on your favorite movie star because you’re looking for an excuse not to like him anymore; it’s nothing an average person would ever have reason to do. Most people just want a phone that runs smoothly and provides acceptable battery life. If HTC can figure that out with the One M9 despite its heavy Sense skin, it seems likely OnePlus can do the same with an even closer-to-stock experience on its new flagship.

While there are a few things to worry about when it comes to the OnePlus Two –including potentially whether you’ll be able to get one– the Snapdragon 810 isn’t one of them. At least not for the vast majority of potential buyers.

Redmi K30 Ultra is said to feature a quad rear camera setup – with one of them using a 64MP sensor – while a MediaTek SoC ticks at its heart.
YouTube 1.8M
Facebook 570K
Twitter 197K
Instagram 133K
RSS