A brief OnePlus Mini Amazon listing out of India offers our latest glimpse into what to expect from this phone’s hardware and software.
Published 13 October 2015, 16:15 EDT

OnePlus may not have launched the OnePlus Mini just yet, but that sure hasn’t stopped anyone from talking about the phone like it’s a sure thing. And hell, between the FCC entry, TENAA listing, and the growing number of reports from independent sources, there’s been ample fuel for discussion. As we wait for OnePlus to make the phone official, it’s managed to pop up once again – and this time in a pretty high-profile place, as Amazon India appears to publish an early listing for the smartphone.

The link’s currently down, but while it was active, the listing seemed to confirm much of what we’ve heard about the OnePlus Mini’s specs – details like that five-inch 1080p screen, 2450mAh battery, and MediaTek SoC. However, not everything’s entirely consistent, and here we return to the mention of 2GB of RAM, after 3GB popped up on those TENAA specs. Whether that’s ammunition for the theory that the OnePlus Mini and the OnePlus X are distinct phones or not, we’re not sure, but this Amazon entry clearly identifies the hardware we’re talking about as the former.

On the software side, there’s mention of a new Oxygen OS 3.0, now based on Android Marshmallow. Unfortunately, the page didn’t bring us any closer to insight on pricing or a release date, as all it offered when it was still up was a message that the OnePlus Mini was “currently unavailable.”

Finally, the listing confirmed that sales of the OnePlus Mini will be invite-only. 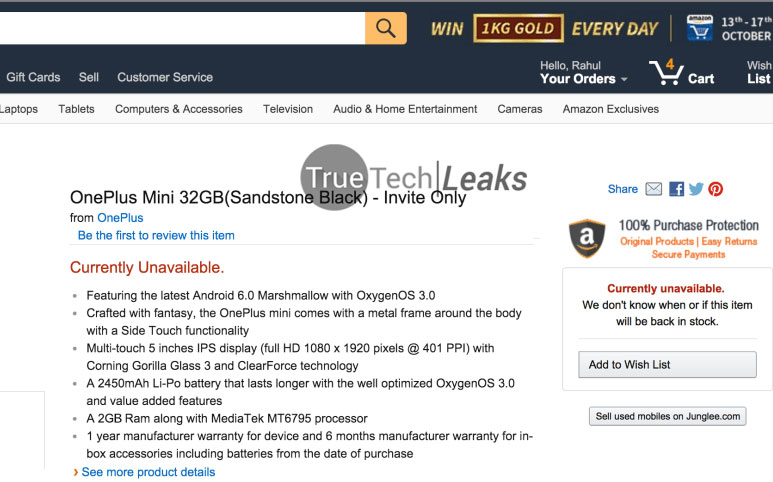