Does OnePlus have any customer goodwill left?

OnePlus, a company whose tagline is ‘Never Settle’, has had its share of missteps. Given everything that’s happened, what must it do to regain our trust?
Published 25 September 2014, 10:04 EDT

OnePlus was founded in almost a year ago by Pete Lau, who was previously the Vice President at OPPO. For those of you who don’t know, OPPO didn’t have the best reputation, so seeing another smartphone born from the “creative juices” of OPPO was a welcome sight. As time passed we started to see a much closer relationship between OPPO and OnePlus, most of which were brushed off with what seemed like a “nothing to see here, go about your business” attitude from the company – but we still had our doubts.

Invitations are for parties!

Nonetheless, OnePlus pushed forward. Time magazine even reviewed the smartphone, calling it the “Phone of Dreams” with a sub-head of “It’s hard to imagine a better phone for Android geeks. Too bad you can’t get one.”

Rather than offering its phone for sale, or even for pre-order, OnePlus decided to offer “invitations”. That’s right, the company invited people to buy its phone. No, not for free; not even for a discounted price. It simply offered you the opportunity to purchase the phone. Oh, and if you wanted to wait for a little while to save up funds, or if you had to “sleep on it” before making the decision, there was a good chance that your invitation could expire, leaving you a bit more than simply frustrated when you ultimately tried to place your order.

This created the perfect atmosphere for a black market to arise. Invitations were given away by various sites, won in contests, or even bought and sold for almost the same price as the phone’s MSRP.

Contests are for carnivals! 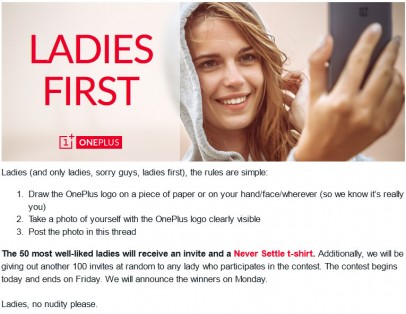 To help gain market share, OnePlus held a series of contests. Some of them enticed potential customers to destroy their then-current phone, others were intended to get more women using flagship smartphones. As you can imagine, these contests were fraught with peril and claims of sexism, and arguably caused more harm to the company’s brand than it could ever have hoped to gain.

Eventually the company apologized for that last one, but not for quite a while, and certainly not until the damage had been done – even causing CyanogenMod (the group of developers responsible for the ROM running on the One) to publicly distance themselves from OnePlus.

All this “creativity” in non-traditional marketing was nothing more than a thinly-veiled shield trying to hide the fact that  shipping delays would be commonplace.

Add to all that the complications OnePlus has had even getting its hardware into countries, and it doesn’t paint a pretty picture. Countless units were held up at Customer, and many were even returned to OnePlus after the company “mistakenly” modified the CE logo (which is the EU equivalent to the US’ FCC mark). Whether or not you agree with a government throwing a fit over the correctness of a logo, it is a mandatory certification mark for products sold within the EU. Oops.

One of the most awesome features for the OnePlus One was going to be the ability to change out the back cover with what the company called StyleSwap covers.

Promised back in March, we were shown all kinds of neat materials from which you could have your own cover made: bamboo, denim, kevlar, and other kinds of wood were shown. Unfortunately, the company recently cancelled these covers – though it still lists the bamboo cover as “coming soon” on its website.

OnePlus marketed itself and its products with a call to action: “Never Settle”. Looking at all the problems it’s had along the way, it certainly looks like OnePlus “settled” in more areas than one.

How many serious missteps can a company make before we stop giving it the benefit of the doubt? Can the company even recover? If so, what must it do to convince us that the OnePlus Two will fix all the problems of its inaugural sibling? What has to be done with OnePlus’ ordering process to convince us to even try to buy it when it eventually arrives?

We’re curious to hear your thoughts! Head down to the comments and let us know what you think!