Thanks to the first OnePlus 6 software update, released as the phone’s global sales were opening, early adopters will be able to hide the notch right out the box. Also, shoot super slow motion video.

OnePlus has an interesting habit of rolling out seemingly minor but sometimes crucial software updates for its flagship-killing smartphones shortly after or even in advance of actually releasing said handsets.

Notch haters probably remember the OnePlus 6 was promised a so-called “black-out” function after the uproar caused by co-founder Carl Pei’s “deal with it” statements and tweets. But since this was a last-minute addition to the company’s list of software priorities, CEO Pete Lau could only guarantee the notch-hiding option would be enabled “after the launch” of the OP6. 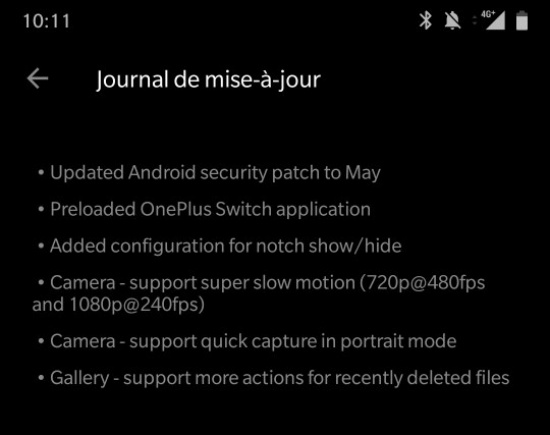 As it turns out, the phone’s very first update, released the same day that shipments began worldwide, includes both an “added configuration for notch show/hide” and a similarly important super slow motion feature.

The OnePlus 6 is also getting May Android security patches, a pre-loaded Switch app and quick capture functionality in portrait mode. Oh, and in case you’re wondering, this is now the company’s “fastest selling device ever”, beating the 5T… in terms of vague success claims. Interestingly enough, the handset now “ships immediately” in key markets like the US, Canada, France or Italy.