Is this a legit leak of key OnePlus 6 specifications or just some educated guesswork based on the OPPO R15? Whatever it is, it definitely feels plausible.
Published 23 March 2018, 06:18 EDT

Based on recent history, it feels safe to presume the OnePlus 6 will look a lot like new phones from the other two BBK-owned brands. We’re talking the Vivo X21 and V9, as well as the OPPO R15 and technically unannounced F7.

The line between educated guesswork and actual inside information becomes quite thin in this context, making it almost impossible to tell which of the two we might be dealing with today. A “leaked” OnePlus A6000 spec sheet may not have in fact leaked from anywhere, borrowing heavily from the official list of OPPO R15 Dream Mirror Edition features. The only OnePlus 6 standout seems to be a Qualcomm Snapdragon 845 processor the company already confirmed would be onboard instead of the R15 DME’s lower-end 660 SoC.

Even the 175 grams weight and 7.5mm thickness are identical to the Dream Mirror’s numbers, not to mention the (starting) 6GB RAM count and 128GB internal storage space or screen size and resolution. 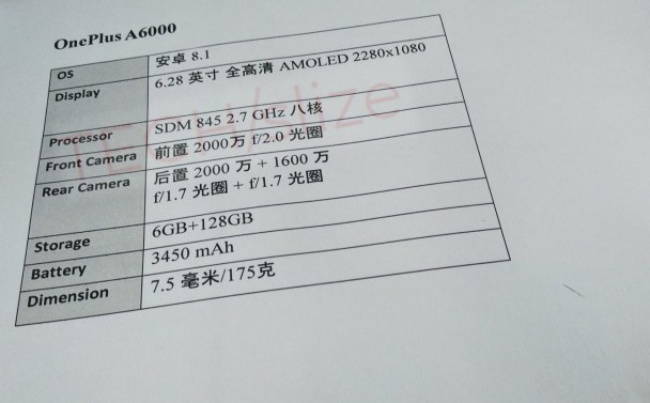 Compared to the 5T, the OP6 should be a little larger, at 6.28 inches, and “notchier”, with a 2280 x 1080 pixel count equating to an iPhone X-similar 19:9 aspect ratio. The dual 20 and 16MP rear-facing cameras with f/1.7 aperture sound identical to the shooters on the back of both the OnePlus 5T and OPPO R15 DME, with the former’s single 16MP selfie cam likely to be upgraded to a 20-megapixel unit.

Slated to run Android 8.1 Oreo out the box, the OnePlus 6 is also tipped to pack a reasonably hefty 3450 mAh battery. The jury is still out on recommended retail pricing.