We have a pretty good idea of how the OnePlus 6 will probably look, and unfortunately, the Chinese company’s next flagship design might include a notch.
Published 07 March 2018, 11:50 EST

OnePlus X2 fake news made Carl Pei’s blood boil just last month, but what may have seemed like phony “leaked” hands-on pics of a OnePlus 6 prototype with a notch in tow could ultimately prove to be the real deal.

Based on AnTuTu benchmark screenshots purportedly obtained by Android Central from a “source close to OnePlus”, the most reasonable prediction is the Chinese company’s next flagship handset will indeed sport a notch. Otherwise, that blank middle space at the top, between the left-hand clock and right-hand icon trio, doesn’t make a lot of sense. 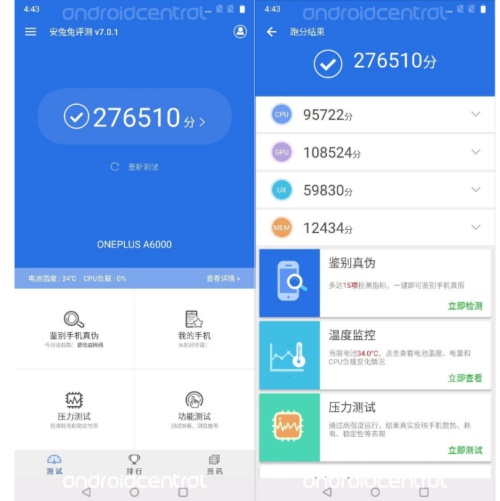 Of course, we may already know exactly how the OnePlus 6 looks. Not from those two leaked real-life photographs, which we still believe to be fake, but following OPPO’s very unconventional and completely revealing R15 teasers.

OPPO and OnePlus are owned by the same parent company, often sharing components, specifications and, yes, design languages. The OP5T is largely identical to the R11s on the outside, and today’s notch “confirmation” makes us pretty confident the OnePlus 6 will bear a strong resemblance to the OPPO R15. Especially as the latter is guaranteed to feature a 19:9 aspect ratio, in line with these newly revealed AnTuTu screenshots.

In case you’re wondering, the “OnePlus A6000” is capable of racking up a record-breaking 276,510 benchmark score, which suggests the Snapdragon 845-powered hardware and software are pretty much final.