Plenty has been spoiled about the OnePlus 5T ever since the OnePlus 5 went out of production. Sure, we sort of had a hint that one of these “extra model” sequels would be coming along before then, but it’s been the torrent of information — including the complete leak of the reviewer’s guide of the device — that’s been unnerving.

So, yeah, the specs are all out there. You should also know that the phone has a fingerprint sensor at the rear, a slightly larger camera bump than on the OnePlus 5, a USB Type-C port with USB 2.0 spec and USB Audio, a headphone jack, Bluetooth 5.0 with aptX HD support, Dirac HD-enhanced bottom-firing speaker and support for the latest carrier aggregation and QAM technologies. It also has cellular support for most any network’s LTE spectrum.

A new Face Unlock feature is also here in a marketplace of other facial recognition methods such as Apple’s Face ID and Samsung’s limited iris scanning capabilities. OnePlus says that it “uses over 100 identifiers” to match imprints within 0.4 seconds. While it will authentication device unlock requests, it won’t be used for sensitive information transactions such as payments.

New Sunlight Display engineering allows the screen to shift contrast as needed in various lighting conditions and for scenarios like using the camera, viewing photos and gaming. 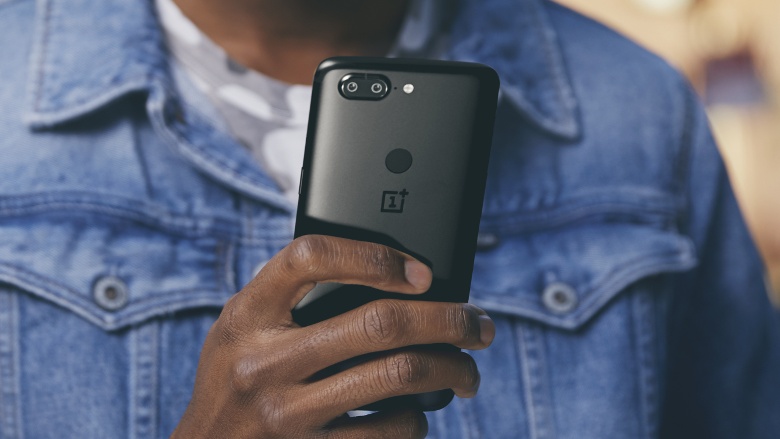 The most important shift from the OnePlus 5 is the rear dual-camera combination. Instead of a zoom view on the secondary camera, both cameras use the same 27.22mm focal length. The main 16-megapixel sensor is paired with a 20-megapixel monochrome sensor to gain “lossless zoom,” better noise handling and an overhauled night shooting experience. All of that contributes to a better Portrait Mode with enough data to suss out subject fringing.

Today’s the day that OnePlus officially reveals the 5T at an event in Brooklyn, New York. This is its first bona fide event with press and fans in an auditorium for a presentaton — previous product launches happened in Times Square tents, pre-recorded videos and in pre-produced virtual reality spaces. People flew in to attend the event. And people at the event are able to pre-order their own unit right from there.

It will be available in the following 33 regions:

The notable odd market out is OnePlus’s most recent venture: Australia. As the OnePlus 5 has run out of stock, we’re wondering if the Down Under will partake in 5T action soon.

There’s plenty of information and experience we’ll have to pass along to you in the near future, so keep tuned to Pocketnow.