According to pre-release benchmarking data, the upcoming OnePlus 5, aka A5000, packs Snapdragon 835 processing power and 6GB RAM.

It’s basically settled that the fifth “flagship killer” (mid-range X not included) from up-and-coming Chinese smartphone manufacturer OnePlus will be branded with the number 5 rather than the unlucky 4, but alas, we don’t know much of anything else about the product likely carrying an A5000 model number.

A bunch of shady e-tailers have tried hard of late to score free publicity with BS placeholder listings that aren’t worth our time, and none of the so-called leaked recent renders couldn’t pass the simplest authenticity test, clearly looking doctored and hailing from dubious sources.

As far as specifications go however, we may have just caught our biggest break yet, thanks to a “new model exposure” document released by benchmarking authority AnTuTu. We can’t say we’re surprised by any of the freshly revealed OnePlus 5 information though, including all the basics of a relatively affordable 2017 high-end Android handheld. 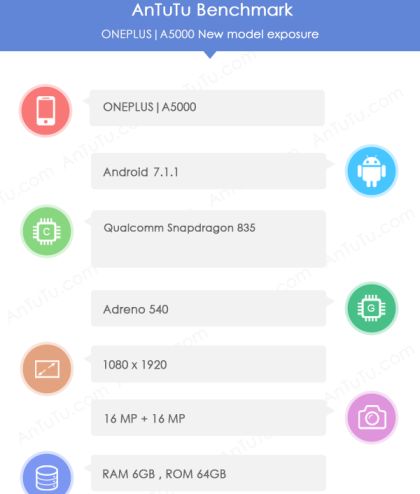 Not so fast, as a single benchmark can’t contain all the features of a phone’s various configurations. It’s thus still possible a top-shelf OnePlus 5 version with maximum memory and storage, and perhaps even a super-high-res panel, is also in the pipeline. A secondary rear cam is definitely in the cards too, no matter the config, and for what it’s worth, this “entry-level” SKU tested here racked up a remarkable total performance score of 176,000 points, topping Samsung’s Galaxy S8 and S8+ by a whisker.