We haven’t heard much about the no doubt looming OnePlus 3 so far, but AnTuTu seems to disclose most of its specs now.

Right around this time a couple of years ago, OnePlus was making all the headlines, despite not yet launching or even unveiling a single phone. Advertising shenanigans left their mark on the company’s first year of existence, and while they weren’t altogether scrapped in 2015, 2016 seems to be a new beginning for the ambitious Chinese startup.

OnePlus is less talk and more action lately, cranking up its marketing efforts where they truly count, and gradually phasing out the controversial invite system for both the 2 and X. The handhelds, which were never expensive, are now cheaper than before and easier to buy, signaling the imminent arrival of a OnePlus 3.

Rumor has it this will see daylight well ahead of OnePlus 2’s first birthday, namely on April 7, and benchmarking data from AnTuTu alleges to disclose the upgraded specifications. 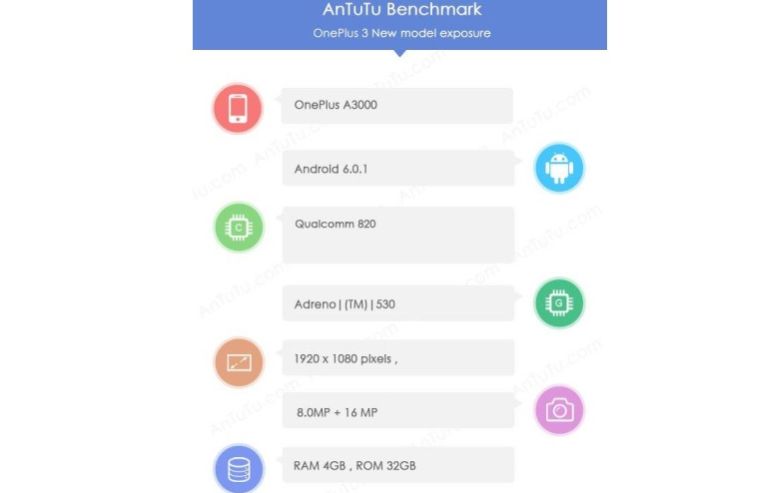 More like rehashed high-end (-ish) features, including the same old Full HD display, possibly with the same old 5.5-inch diagonal, 4GB RAM, and 32GB ROM. While the OnePlus 2 also offers 4 copious gigs of memory in its top-of-the-line configuration, it only does so when paired with 64 gigs of internal storage, so in a way, we’re looking at a small step up here.

The imaging department will be improved a little more consistently, as both the rear and front-facing cameras gain a few megapixels, surging to 16 and 8MP sensors. Finally, the processor running the hardware show on the “OnePlus A3000” is unsurprisingly a Qualcomm Snapdragon 820. Oh, and there’s Android 6.0.1 Marshmallow onboard already, so this is likely a fairly advanced pre-release prototype. April 7, everybody!