One month with a Pebble; Chronicles of a non-believer

If you’ve ever asked yourself why on earth you’d ever consider buying a smartwatch, trust me, you’re not alone. Just two months ago I felt the same way. Ever since the birth of many of the smart watches we’ve seen come and go from LG and Sony, I always felt that they looked like toys that didn’t serve a purpose. Yes, I did belong to the crowd of Casio Data Bank users back in the 90s, but as a teenager, that’s part of what was normal at that age. Today I’m already scratching my mid-30s, and I don’t know about you guys, but watches have become more of a fashion accessory for me, than something that I’d call useful. It’s so much so, that two months ago I noticed that I had been using a watch with a dead battery for weeks without noticing, since hey, I get the time from my smartphone.

Recently though, since I moved to a different city, I fell in the clutches of circumstance as I noticed that the box that held my four watches disappeared in the move. It forced me to buy a watch, and as I begun quoting some of the watches I visually liked, a lot of questions dawned on me. First of all, why would I pay the price of a Nexus 7 to own a product that could only do one thing? If you think of it, buying a regular time piece, that’s not something fancy like a Rolex, doesn’t really make sense if you don’t really use it. It makes more sense to invest that amount of money on something you will find useful, and that’s when I started considering the Pebble.

First of all, I decided to not buy a Galaxy Gear because I hate the idea of being forced to use a Galaxy phone in order for my watch to be useful. Surely it offers more functionality than the Pebble, but since this was the first smartwatch that I would ever own, I felt it was smarter to go for the more affordable option first. Also because even if it’s made out of plastic, I could switch the bracelet to give it a fancier look and feel, which you sadly can’t do with a Galaxy Gear as well.

So, after paying $150 for a smartwatch I was reluctant to buy for 11 months, how has it been? Let’s talk about it. 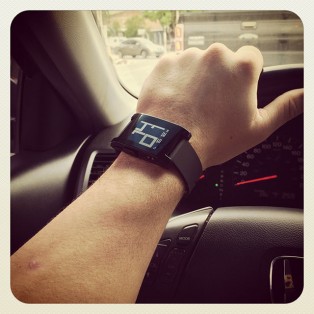 A smartwatch is a great filter

Now that said, once you start integrating the Pebble into your daily life, you get to understand why it’s so popular. First of all, it serves as a filter for my notifications. As smartphones allow even the dumbest games to provide you with push notifications, it’s truly annoying to be driving and have your phone alert you of a new deal for Asphalt 8. With the Pebble, I see the alert on my watch, and since I don’t really find it interesting, all I have to do is dismiss it from my watch without having to pull over, or put myself in danger by checking the alert on my phone.

If you’re like me and you live in a dangerous area, it’s also great to know that you can keep your phone in your pocket at all times, since you’ll be able to filter your notifications on your watch, without the need to expose your phone as well.

A smartwatch is just the beginning

If you buy a Swiss Army watch (my favorite brand so far), all you get is what you pay for. The watch was only designed to tell you the time, so you can’t customize the watch face, nor install the chronometer you wish it had, nor give you the running stats from your phone, nor even give you the date if you bought a watch without the feature. A watch is just a watch, and that’s rather unfortunate. 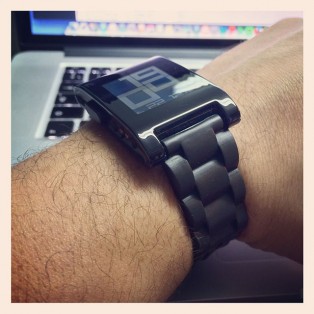 The cool thing about a smartwatch is that it’s an empty canvas that can be customized. There’s a very healthy developer community growing around the Pebble, and as this happens, newer functions will be available for the watch as the product evolves. I honestly found it ridiculous to buy a Nike FuelBand for the same price of a Pebble, again, due to the limitations of fitness straps. With a smartwatch, it’s only a matter of time before these services reach your watch.

Yes, I do regret taking so long to buy the Pebble, now that the Pebble Steel exists. The Pebble Steel is what the original Pebble should’ve always been. Still, just like I owned 4 watches that only gave me the time, I don’t think it’ll be a bad idea to won two Pebbles very soon. As the operating system evolves to give me sports scores, and a true feed of notifications, the idea of using a smartwatch just gets better.

So, do I recommend that you give a smartwatch a try? Absolutely. This is one of those things that you have to try out for yourself to understand. As much as Michael and Taylor tried to convince me months ago, I’ll admit I was a non-believer of the product category until I gave it a try.

Is the Pebble and Pebble Steel worth the money? Well if I told you how much I’ve paid for watches that only gave me the time, then you’d understand why the pricing of the Pebble makes sense. I can’t agree on the pricing of the Galaxy Gear, since it includes a Galaxy phone along with it, but hopefully Samsung will come to its senses soon.

What about you? Do you own a smartwatch or do you you stay away for any particular reason? Leave us a comment.