The HTC One M9 overheating non-issue: one more reason not to trust benchmarks

All processors put off heat, some more than others, but what about rumors of the HTC One M9 overheating to blistering temperatures? Let’s debunk them now.
Published 24 March 2015, 19:14 EDT

By now you’ve heard the rumors that Qualcomm’s Snapdragon 810 SoC is “suffering from overheating issues”. You’re aware of the claims that the HTC One M9 gets “miserably hot”. You’ve even seen what are purported to be thermal images of various devices, and the One M9 is glowing orange, ready to melt through the tabletop. But is any of it true?

Tweakers.net published a very compelling image, one that (on first glance) would convince even the most vocal of naysayers. Unfortunately, it’s not realistic.  The staff here at Pocketnow has used an HTC One M9 quite extensively, and on two different software builds. We never noticed anything that could be considered “uncomfortably hot” even after an hour of high-intensity gaming.

An hour of gaming does not cover (nor represent) every use case scenario, so for over a week of toting the One M9 through the Greater Boston area, something very, very interesting – and perhaps somewhat troubling – began to take shape.

Once we started cranking up the apps, running graphics-heavy games, we were able to get the temperature to rise – though only slightly.

We’ve seen notably higher temperatures after significantly less load on some older devices. What’s more, regardless of these temperatures, responsiveness never suffered and Sense was as responsive as ever.

Digging into the Tweakers.net image, the phone’s surface temperature reportedly hit 132ºF (55.6º C) – but that’s not the whole story.

First, according to sources, that measurement was only reached after repeatedly running the GFXBench benchmark test – definitely something you’re not going to be doing in everyday use. Even here at Pocketnow, when we run benchmarks, we might run any given benchmark up to three times to average the results. Even still, the temperatures observed after running a benchmarking utility are not representative of the temperatures that you’ll observe in real-life. Benchmarks push every component of a system as hard as possible – then try to come up with a quantifiable ranking measurement. Benchmark scores might be a good tool to get a basic picture of how a device performs compared to others, but they don’t answer the question of how a device will perform for you. 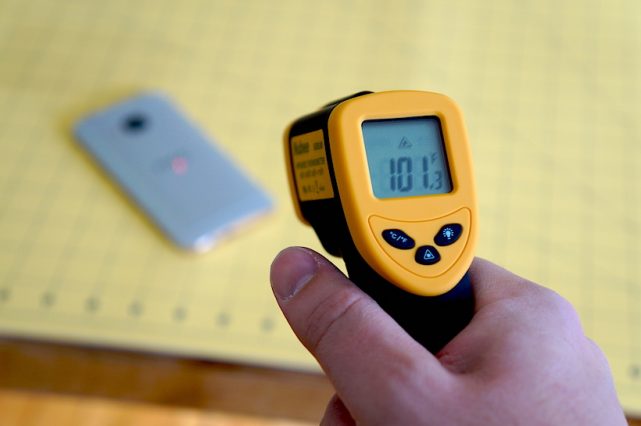 Second, HTC went on the record that the software that particular unit was using wasn’t the final version of the software.

Additionally, the One M9 distributes the heat generated by its components very, very well. Many other devices don’t do a very good job, and most of the heat is concentrated around the processor.

When all is said and done, the Snapdragon 810 is a very respectable SoC which doesn’t run any hotter than anyone should expect, and the HTC One M9 does exceptionally well dissipating what heat it does create over a large surface.

What’s so troubling about all this? The industry went wild, grabbing hold of an over-hyped image and using it to drive traffic and pageviews to their sites – without doing their due-diligence to explain that the circumstances of the test are highly unlikely to be reproduced in real-world use. They repeated the line, damaging the reputations of both Qualcomm’s chip and HTC’s smartphone. We’re not entirely blameless here either. This may call for a deeper examination of the re-blogging model employed by technology media, but that’s a conversation for another day.

The next time you read a fantastical headline or a claim that seems too outstanding to be true, keep in mind that it probably is. Keep an open mind, and look to see if anyone has been able to confirm the claims.