One Day With S-Voice Was Enough

Until a few days ago, I’d never used one of these latest-generation voice command applications. S Voice has been my only exposure to this brave new world of vocally-powered control. While I was mildly impressed at how many corners of the phone could feel the warm touch of S Voice, I didn’t feel a compelling need to explore many of them. And when I did, the lackluster performance of the app reminded me why I just stick to tapping and swiping most of the time.
Published 07 June 2012, 14:56 EDT

No one seems to be able to talk about S Voice, the voice-control application shipping with the new Samsung Galaxy S III, without referencing Siri. The Apple-based equivalent launched first, of course, serving as one of the few features justifying the existence of the iPhone 4S, so comparisons are perhaps inevitable. Though voice command had existed before, Apple pulled its usual stunt of “doing it better” -and certainly marketing it better- with Siri, and voice command on mobile phones found itself thrust into the spotlight again. This level of advertising spending on vocal command hasn’t been seen since Sprint made such a big deal out of voice dialing back in 2001.

One of the big drivers of that early-21st-century voice-dialing push was Samsung, its SCH-3500 flip phone one of the first devices to ship with the feature. So it seems only appropriate that Samsung finds itself at the leading edge of the voice-command movement again, over ten years later. And while most people who’ve already tried the feature have compared it with Siri, I’m not going to. That’s not because I think it’s an unfair comparison; despite Samsung’s pioneering efforts in the field, I’m of the opinion that S Voice wouldn’t exist if not for Siri.

No, the real reason I’m avoiding the comparison is because I don’t own an iPhone, and my iPad doesn’t support Siri in its stock configuration. So until a few days ago, I’d never used one of these latest-generation voice command applications. S Voice has been my only exposure to this brave new world of vocally-powered control. Not to worry, though: I have some thoughts.

Jumping into S Voice to configure the service for the first time was fun in that special way that only geeks know: the giddiness that comes with configuring a brand-new headline feature on a smartphone. Overall, the app required very little customization out of the box. My favorite part was selecting the “Wake-Up Command,” the keyword that a user has to speak in order to rouse S Voice from standby slumber. By default, the wake-up command is “Hi Galaxy,” which I guess is fine, and it’s probably easy for the phone to understand, with all its distinctive plosives and consonant hissing. But as a Star Trek fan, I’d been waiting for this moment for most of my life: I immediately changed the wake-up command to the simple, effective, and ultra-nerdy “computer.” 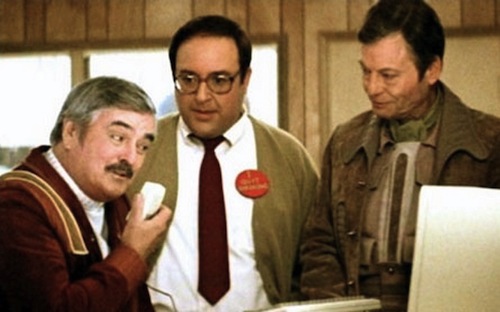 Not nerdy enough to beat Joe Levi to using this image, however.

There was no gender-selection option for the synthesized voice, but that wouldn’t  become important until later. I did put up with the English-UK dialect setting for a few minutes before shifting it to the slightly-less-drunk-sounding English-US lady, though. After inputting my location and Facebook and Twitter credentials, I took the service for a test drive. 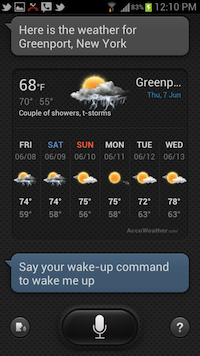 Aside from giving me a little thrill every time I said “computer” and the phone dinged in response, S Voice did a few things very well. One of those: checking the weather. I don’t know what it is about technology guys and their obsession with knowing whether or not it’s raining in London, but these voice command apps have got that feature locked down. Asking S Voice what the weather was like in various locales got me a solid answer every time, and the results were presented beautifully on the app’s faux-carbon fiber background.

Some of the other basic functionality was also great, like toggling system settings off and on. It was one of the rare cases -maybe the only one- where I found using S Voice more convenient than using the touchscreen. Double-tapping the home button and saying “turn WiFi on” became second nature very quickly.

Other basic functions performed well, with accuracy and helpfulness diminishing as complexity increased. For example, setting an alarm for a specific time was very simple, as was navigating to my apartment by saying “take me home.” I also ran it through a few trivia questions, asking the heights of several famous landmarks; the Empire State Building was in there, while Somerville’s Prospect Hill was not. No surprise there. Finally, app launching was handy; saying “open Foursquare” got me into the app pretty consistently, while other apps seemed to give S Voice a bit more pause.

Where I didn’t fare as well was … pretty much everywhere else. 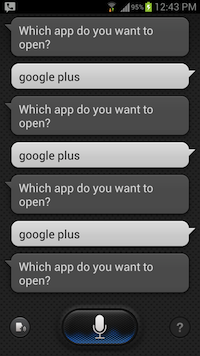 The minute I started demanding more of S Voice, the experience started to stumble. Still frustrated with a video project that fizzled earlier in the day, I asked S Voice where I could buy a camera. It provided me with a list of Radio Shack locations- not my first choice, but still useful. The problem: the list was centered in Manhattan, about 200 miles away from me. Despite the fact that my address was entered correctly in S Voice’s settings.

I decided to return to more domestic questions, and presented S Voice with a culinary query. Unfortunately, it heard “how do I cook macaroni and cheese?” as “how do I clean teeth?” (it didn’t know the answer, but offered to search the web).

I should mention here that I don’t slur my speech, and I have a fairly typical Standard American dialect. I’m also a voice artist with reasonably good diction. If there’s a prototypical example of the most suitable voice with which to address a computer, it’s probably mine.

Anyway, when I decided to take S Voice up on its offer to search the web for answers to the question of how to clean teeth, I found that I couldn’t, because it had stopped listening. That’s right: S Voice asks you a question, and then stops listening, so you need to prompt it again. It’s the equivalent to a waiter saying “I’m sorry, we don’t have any coffee, but we do have tea. Would you like tea instead?” and immediately leaving the table before you can answer.

In addition to the generally bad UI, the app is full of bugs. About two minutes into my first use, its voice changed from female to male, with absolutely no prompting from me. When it finally changed back, again with no input on my part, it was the voice of a different woman. The two ladies have since alternated at random intervals, with Mystery Man remaining curiously absent … so far.

The app’s “trigger word” gave some reporters trouble at the Galaxy S III announcement, and I can safely report that it’s not just because they were in a noisy room. In absolute silence, uttering the trigger word only woke my device up about half the time, and then only if I was bellowing “COMPUTER!” across the two feet of space from mouth to phone (yes, I made sure it was listening). And those performance issues persisted in voice dictation of tweets, texts, and Facebook updates; though the dictation software built into ICS is incredibly good, the engine S Voice is using … really isn’t. If you have any contacts in your phone book with names more complex than “Bob Smith,” you can forget about it: S Voice will eviscerate them.

Finally, it constantly missed words and -most infuriatingly- consistently cut me off before I was through talking. 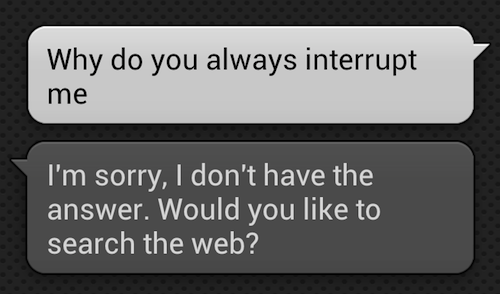 One of these days, S Voice …

In all, I found S Voice to behave exactly as one would expect from a modified version of Vlingo, which is what it is. My issue revolves around more than just the app’s error-prone disposition, though. I have a more fundamental concern: I spent more time thinking about how to put the app to use than actually testing its operation. I consulted the help screen several times to remind myself of all the things that can be done by voice rather than by tap. While I was mildly impressed at how many corners of the phone could feel the warm touch of S Voice, I didn’t feel a compelling need to explore many of them. And when I did, the lackluster performance of the app reminded me why I just stick to tapping and swiping most of the time.

Apps like S Voice definitely have the potential to deeply affect how we interact with our mobile devices; there’s a bright future ahead for voice command. But that future won’t come to pass until companies graduate from treating it as a hobby to embracing it as a fundamental input method of the future. And that means building an app that can listen, which is sensitive to context, lacks too many bugs, and which I can tell to “snooze” when it’s sounding my alarm clock. In short, I want the S Voice I was hoping for.

Been using S Voice and have similar or different views? Want to talk about how S Voice compares to Siri or third-party voice-control apps? Weigh in with a comment below and continue the discussion!

OnePlus is going to condense the whole journey in a 4-part documentary film that will be out on June 30, ahead of the rumored July 10 launch event.
YouTube 1.8M
Facebook 570K
Twitter 197K
Instagram 133K
RSS