We get a look at the retail edition of the Oculus Rift hardware, as well as the new Touch interface device.

The world of virtual reality is finally seeing the arrival of hardware advanced enough to make truly immersive experiences a reality. That’s bringing us efforts like the HTC Vive, set to go up for sale before the end of the year. But the granddaddy of them all is Oculus VR’s Oculus Rift, long available as developer hardware but seemingly never quite ready to take the retail plunge. That’s all changing in 2016, and today Oculus shared just how that commercial deployment is set to happen, as it revealed the final Oculus Rift hardware.

The Oculus Rift headset is set to go up for sale in Q1 2016. The hardware’s been adjusted to better accommodate users wearing glasses, and a focal distance adjustment dial will allow fine-tuning of the visual experience. The headset pairs with an included USB IR camera that sits on your desktop and tracks the Rift’s position in real time.

For control, the Oculus Rift will ship with a wireless Xbox One controller, and while that will get you by, the more interesting news comes in the form of the Oculus Touch interface option (above), a two-handed pair of lightweight controllers that not only accepts your input, but is designed to offer immersive haptic feedback.

Sadly, the big questions of pricing and a specific release date remain elusive – but we’re sure they’ll arrive in the months to come. That also spells plenty of time to update your PC, as you had better believe that the Rift’s hardware will eat up every drop of performance you can throw at it. 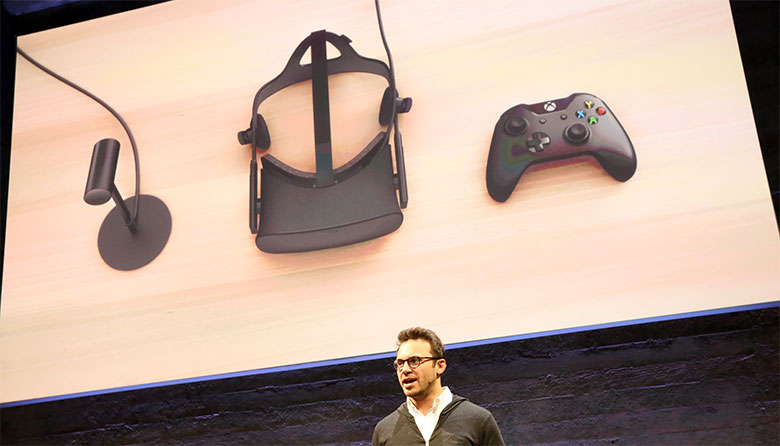