Technically, the NVIDIA Shield TV set-top box isn’t getting upgraded or revised today. It’s merely ditching the controller to save you 20 bucks.

NVIDIA is understandably not ready with yet another hardware revision of the Android TV-powered Shield set-top box originally released back in 2015, but that’s not stopping the GPU specialists from trying to rain on Apple’s 4K-supporting parade.

The very day before the aptly titled and long overdue Apple TV 4K is slated to start shipping, at least for those who pre-ordered early, a new $179 Shield TV bundle is officially unveiled. 20 bucks cheaper than the previous entry-level configuration, this one merely ditches the included controller, retaining the remote and a long list of advanced entertainment capabilities. 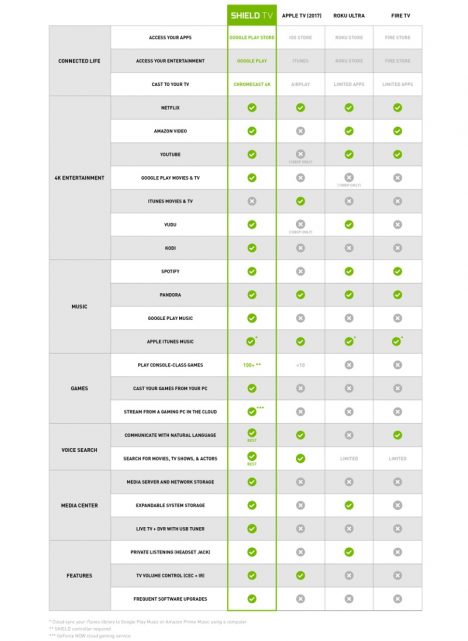 NVIDIA uses a “competitive chart” to claim the Apple TV (2017) barely handles around half of those services and features at maximum potential, highlighting how the other $179 and up media player limits YouTube and Vudu at 1080p.

Pre-orders for this “new” 16GB Shield TV variant are already underway at the manufacturer’s US e-store, with “select retailers” set to join the party soon, and deliveries beginning October 18.

If you wish to play “console-class games” on your big living room screen, of course, you’ll still need to cough up $199 for the remote and controller package, or $299 for the Shield Pro model with 500 gigs of internal storage space.