Since December of 2016, the Microsoft Store has had a pretty good deal on the NuVision TM800W560L Signature Edition Tablet.  The normal price is $129, but for a while now, the price has been only $49. My old 8 inch Dell Venue 8 Pro with 2Gb of RAM and 32Gb storage was a good deal at $199 years ago, but has recently started to crack with a bulging battery.  So I was in the market for a new pocket-friendly full Windows 10 PC that I could use on the couch or keep in a coat pocket for processing RAW photos on the train. Surprisingly, the $49 NuVision has turned out to be a pretty nice replacement.

Also in the box right up front is a printed note suggesting that you change the display scaling settings to something between 125% and 200% because the default 100% scaling makes the whole Windows 10 interface look really tiny on this 8″ display. The note tells you how to do this of course. I like the 200% scaling size, but that’s too big to allow for snapping of apps side by side in Tablet Mode, so you might want to go for 150% or 175%. Speaking of Tablet Mode, the default interface is actually desktop mode, which I find very difficult to use on a touch screen tablet of this size.  It’s best to swipe the right edge to show the action center, and turn on Tablet Mode to enable more Windows 10 touch gestures and hide some mouse-friendly features. 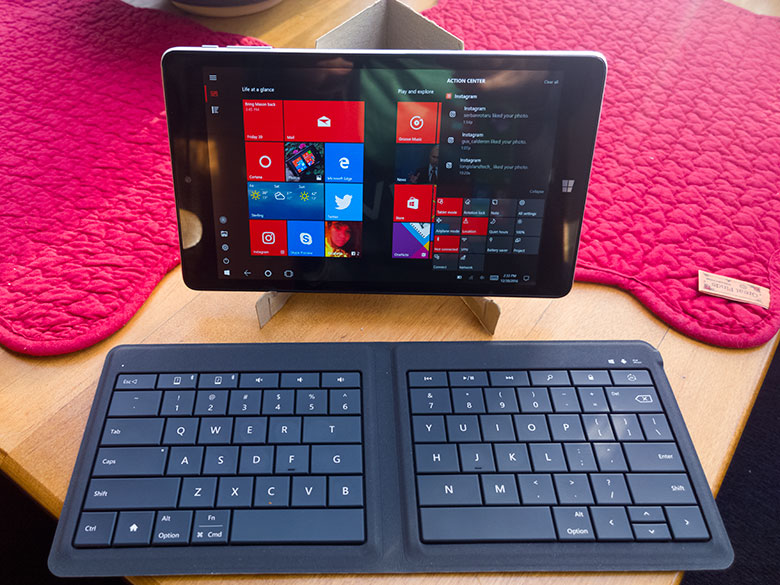 Of course, if you want to pair a Bluetooth keyboard and mouse with the tablet, feel free to keep it in Desktop Mode.  I paired the Microsoft Universal Folding keyboard with the NuVision tablet, and it worked beautifully. At $99, it’s kind of strange that this keyboard costs twice as much as the Tablet PC though.

The included Micro-USB to USB-A adapter is a very welcome surprise. This comes in very handy for attaching my full-sized SD card reader that I can plug in to view and cull high resolution RAW photos with. That’s one of the primary intended functions of this tablet for me, and running Phiewer on it with an SD card full of RAW Nikon D750 photos on it works great. If you need to do any troubleshooting in Safe Mode or do a fresh clean install of the operating system, you’ll need this to plug in a USB keyboard as well.

Speaking of operating systems, the NuVision tablet comes with an older version of Windows 10 Home edition 32-bit. Windows Update didn’t initially recognize the availability of the Anniversary Update, so I had to go to the Microsoft site and download the Upgrade Advisor which installed the latest version of Windows 10 without any issue. You’ll want to do the updates before you install anything else because there’s only 32Gb of storage built in. Running a Disk Cleanup afterwards does a good job of regaining disk space used during the update.

I also installed the Universal Windows Platform versions of Microsoft Word, Excel, & PowerPoint since the full editing capabilities of those are free on small screen sizes such as this. While they’re not as feature rich as they could be, they’re generally good enough.  I also installed the full desktop version of OneNote 2016 since that’s free and so much more powerful than the UWP version. OneNote is an essential app for note taking and research, and having the full version in a pocket-friendly devices is great. Another must-have program for me on the go is some kind of HTML editor. On this device, I went with Microsoft Expression Web 4. It’s a free download, and it takes up very little disk space, but has a lot of great features including FTP server sync, visual CSS editing, and an WYSIWYG interface. At only 99Mb download, it’s much better than installing Dreamweaver or Visual Studio.

At $49, you’d probably expect this kind of Windows 10 tablet to be really slow, unresponsive, and frequently crashing to a blue screen of death, but that’s not the case at all. Okay, yes if I throw a ton of bloated script-intensive websites at it, you’ll see some problems and maybe an out-of-memory error, but as long as I keep things lightweight, the speed and functionality is great. I can even run the NESbox Universal Emulator on it for some old-school console games!

Obviously, this isn’t going to replace my larger much-more-powerful Surface Pro 4 for things like graphics, video editing, and 3D modeling, but for the basics like HTML/CSS coding, writing, emailing, and web browsing in a light weight pocket-friendly package, you can’t beat $49!

Now, why can’t I get one of these with a cell phone radio in it?