After a bunch of different teasers, it’s now official. With a late-night press release, Microsoft’s Devices and Services Group (better known as Nokia) has taken the wraps off of the X2 smartphone, the follow-up to the Nokia X from earlier this year.

Featuring a “stylish exterior,” the phone is meant to appeal to people who like a little color on their phones. A “cool” translucent outer layer makes the phone glossy though, which Nokia thinks is a good thing — we’ll have to put it to the test to determine our verdict on that one.

Two buttons are found on the front side of the phone, home and back. This is one more than we got last year, which was just back. A new Fastlane feature will show upcoming events, recently used apps, and different tasks you’ve performed throughout the day. It reminds us of a glorified Google Now. 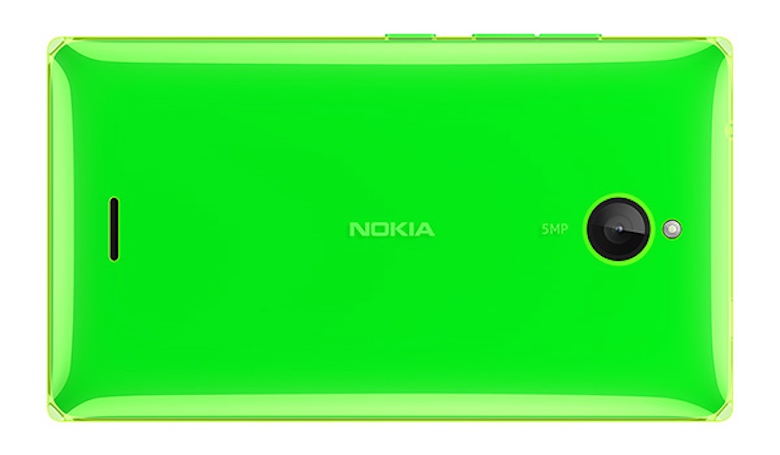 The X2 is also very much in-line with the Nokia Lumia experience despite being an Android phone. The “apps list” will keep your home screen cleaned up so you can just leave your most-used apps there if you’d like. There’s also a tile color picker just like there is on Lumia phones.

There are a couple apps that come pre-installed on the phone, such as Skype, Outlook.com, OneDrive, HERE Maps, and MixRadio. OneNote has made its debut on the Nokia Store to join the fairly large selection of apps there too, although this is an Android phone. Our own Joe Levi showed us how to turn the original X into a regular Android, so the same feat should be able to achieved here. The latest version of the Nokia Store also “incorporates third-party app stores,” which we believe means that you can download your own separate app stores. 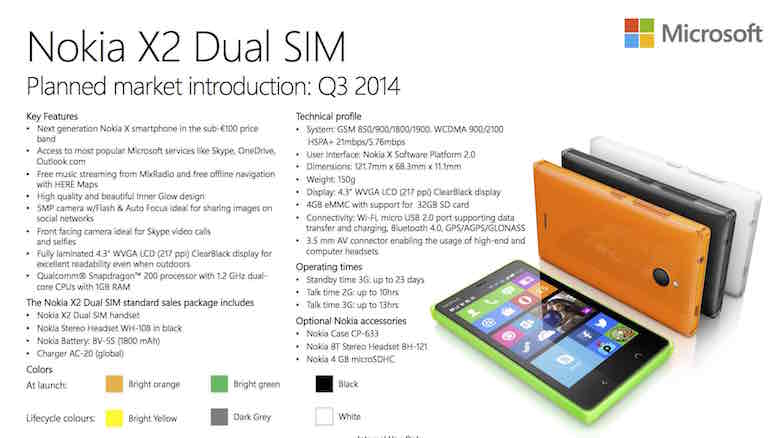 Let’s talk specs. There’s a 1.2 GHz dual-core Qualcomm Snapdragon 200 processor, a 4.3-inch “ClearBlack” display at a WVGA resolution (with 217 ppi), a 5MP rear-facing camera, and a front-facing camera with a VGA resolution. The phone itself is also dual SIM, and it features 1GB of RAM. The specs are rounded out by an 1,800 mAh battery, and 4GB of internal storage (with microSD expandability up to 32GB).

The X2 is immediately available globally in a select group of countries for €99 (about $135). It comes in either glossy green, orange or black, with glossy yellow, white and matt dark grey coming soon. There’s no word on US availability quite yet.