Nokia made its financial records for the second quarter of the year public, and with the numbers, we find out about Lumia sales.
Published 19 July 2012, 07:19 EDT

We’ve talked about it briefly on our Pocketnow Weekly Podcast — and we occasionally touch on it whenever Nokia’s and Microsoft’s share of the market comes in discussion — but now it appears that the speculations can end. The Finnish company made its financial records for the second quarter of the year public, and with the numbers, we find out details about Lumia sales.

It appears that Nokia sold four million Lumia devices in the second quarter — compared with one million reported for the last quarter of 2011 and two million in the first quarter of this year — managing to double its previous quarterly sales numbers. The total number of Lumias sold to date seems to be seven, if we add up all the millions reported, which is a nice number, really.

The biggest problem though is maintaining this increasing trend with the recent Windows Phone 8 announcements and the fact that current devices will not be upgraded to the upcoming Microsoft platform.

As far as financial numbers are concerned, Nokia recorded a total operating loss of around $1 billion and net sales of around $9.1 billion. The table below should help you visualize numbers for the second quarter and the one before that but if you are interested in the entire report follow the source link below. 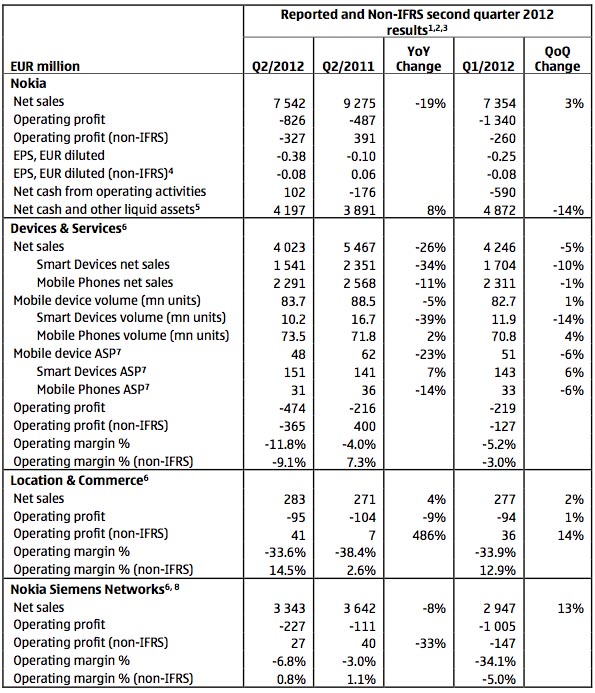 It is tipped to pack a 4,200mAh battery with 30W fast charging support.