For many of us years ago, the idea of Nokia being a Windows Phone OEM would’ve been impossible. It’s funny to remember that the whole “soft key” UI that we enjoyed in Windows Mobile’s great one-handed operation, was all invented by Nokia a few years prior on their dumb phones. Today, Nokia isn’t just Microsoft’s biggest partner when it comes to Windows Phone, but also a Microsoft company as well, at least in their smartphone division, and their numbers back it up.

Sadly once you dilute that 90% that Nokia owns, you’ll see that the budget Lumia 520 owns most of it at 23.2%, with the Lumia 920 and 620 taking the spots that follow at 9.2% respectively. We’re concerned about the fact that the Lumia 1020 is nowhere to be seen in the chart, but obviously since this is a global chart, which could lead us to understand why Nokia dropped its price recently, though it could also be that the chart is global and the percentage is on a rise. 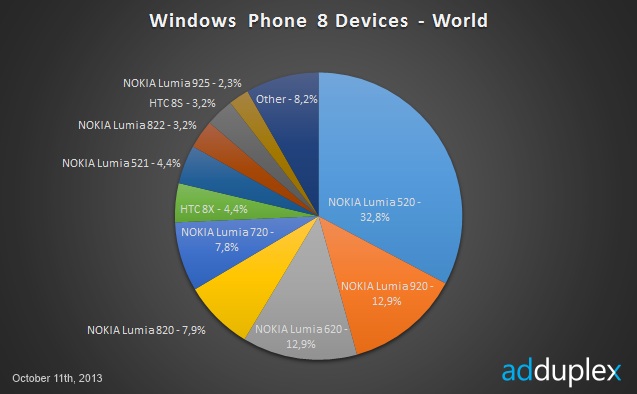 It would be great if other OEMs would do the same job that Nokia is. I’m sure the Windows Phone marketshare would be dramatically different if that were the case.

You can now take advantage of the Apple Music Android application on Windows 11, albeit you may need to do some extra steps to get it working.

Samsung is no longer accepting more beta-testers into the One UI 4.0 Beta program,…