The Nokia N1: Before Play services

“We’re waiting on Google Play services to come for this device.”

Sure, the hardware works like a dream and the software, while a little bare-bones and boring, doesn’t look offensive at all.  Nokia gives the device regular OTAs and while the proprietary “N Store” is all in Chinese, you can grab plenty of the usual apps through APK Mirror or alternative app stores. Heck, take a plunge and look around the “N Store,” it’s not like it’s poisonous … just extremely foreign.

“We’re waiting on Google Play services to come for this device.”

Welcome to the ecosystem.

Funny how little ‘ol Google likes to stick its thumb in everything. It’s the data and coding mainframe that gets Drive, YouTube, Translate, Chrome and everything else they put out to work nicely. And if you’re invested at all in Android, you know that the overwhelming majority of devices sporting the OS demand you sign into Google when you boot up for the first time.

From productivity to entertainment to information gathering, Google has put out platforms for all of them under their umbrella. You point at a date in one of your Gmail messages and Google Calendar can set up a reminder for you. You can save an attachment from that same message to your Drive account and edit it from there. So on and so forth.

So, while you might be able to cobble together another ecosystem with Microsoft’s Office suite, maybe Thunderbird from Firefox (if you prefer that client), Flickr and HERE Maps … or even adopt Baidu’s ecosystem (while taking Chinese classes), there’s just all this added difficulty to use and make useful these tools.

And oh yeah, there’s YouTube, of course. Vimeo and DailyMotion be damned.

XDA has been waiting on a “miracle” or the international ROM to come out, and on May 19th, someone figured the path to root. That’s four days before its release with Play services in Taiwan and exactly three months to the day it was released in China.

Now, if you’re not familiar with Android development and modifying, well, I’ll admit I’m barely toes deep in it. But the simple conclusion is this: you can’t just slap on Google Play services and then install the Play Store and be set to go. That’s because either the software installed on the N1 or the Intel-crafted SoC does not make any opening available to the bootloader. The bootloader, in this case, is essential for root or changing what’s essentially an Android device’s DNA.

It took a while, but someone found a way in and loaded a Nexus ROM onto the N1 and it worked. We’re rooting the N1 and we’ll post the second half of this story after we take a spin with it.

But in that while, we saw the tablet sell to many people outside China via marketplaces like 28Mobile, for many reasons, one of which being that this pretty capable hardware came from a name with cache and a transforming brand.

So, we decided to live with the Nokia N1 with its Android Open Source Project software and see if we could cheat our way into some Google apps.

I mentioned this at the top already, so I’ll be quick here. The go-to replacement for the Play Store is the Amazon Appstore. I know, there are plenty of fish in this sea, but like I said, go-to.

Facebook, Twitter, LinkedIn and Vine were there in addition to third-party apps for Instagram. No Snapchat, though, because that requires Google Play services. Yep, you’d be surprised at just how many non-Google apps also need those services as well.

Another option is to search out the .apks of the apps you want on sites like APK Mirror. The same surprise from above may await you.

Say it with me: “This relies on Google Play services, too.”

Of course, you can’t say that phrase to the N1 and expect to get anything out of it in the state it’s in. You can’t even say, “What’s the tallest building in North Dakota” and expect search results to come up. You can’t dictate notes onto a document. Heck, there’s a dearth of microphone icons all around the software. And if you do happen to find one in an app that usually supports it, it will tell you to get Google Play services.

There is one alternative available in the app store for at least voice search and that’s the Search+ for Google,Bing,Yahoo app. It’s a pretty accurate interpreter overall, but you do have to watch out for the initiation process for every request which takes a couple seconds. Those are a couple seconds I could’ve spent typing my request instead of saying it, then having it partially heard by the app or not at all and then I’d have to do the search over again. That’s the hassle I find with it.

Switching between the built-in browser and Dolphin Browser, I hoped I was going to be able to enjoy the tube on the N1’s brilliant, high-res screen. While operating on the mobile YT site, I was able to watch all the videos I wanted in fullscreen … 360p or so. The maximum quality setting on YouTube’s mobile site is “HQ,” which is pretty mushy on a 2048×1536 panel.

Things get pretty skinny on desktop mode as pressing the fullscreen icon gets you nowhere, leaving you to zoom into your video to watch it in the highest quality possible (the quality toggle does work) and, hopefully, not fiddling with the screen for a while to avoid missive redirection to another page. Sometimes, desktop mode gets temperamental and makes it difficult to play videos or doesn’t play them at all.

And in the third-party appsphere, navigation is fraught with traps. The FREEdi YT Player has been around the longest time and is the best way to watch fullscreen YouTube videos on this thing. It even lets the audio stream while you run other apps or even have the tablet locked! The catch? You best hope the clip you want is in a playlist as searching for individual videos or looking up videos from a channel turns up an error video noting that the app isn’t compatible with YouTube. For some reason, videos in playlists are still okay to play, at least for now. So, if you’re using FREEdi, stack up that Watch Later list.

When you open up Maps or Drive or any media from Google Play on your browser, it doesn’t take long for the page to hang up. You might be mid-scroll, just about to enter a directions request, trying to reference a page from a book or opening up a doc. Nothing loads. There’s a white page and it stays white. If you keep trying for long enough, you might end up borking your browser and having to restart.

Hangouts is inaccessible without Play services, period. The same, for some reason, for Chrome. While you can grab the .apk, it insta-crashes on launch. Photos will work as a local gallery but, of course, not be able to connect to Google.

On the bright side, Gmail and Translate actually work a treat on the web browsers, both with complete functionality! Which is good news, because if you decided to go for the native email client, you would go without threaded responses and just plain proper folder organization.

The video I put up over the weekend shows all of this in motion:

The other shoe to fall

We know the story will change once we get this thing rooted. We might not know whether if it’s for the worse or for the better and by how much, but we’ll let you know as soon as we’re ready to give your our impressions of the Nokia N1 WITH Google Play services.

Without them, we find ourselves at a slight loss for use of this tablet. We consume great media on our tablets with more comfort than we do with smartphones or even larger monitors sometimes. We’re also able to create great media with the portability of a smartphone and with airspace closer to a desktop system.

My personal opinion is that a tablet should be able to walk that line between mobile and PC while delivering the smarts that both of them have access to.

While the N1 can, can, can do it, it doesn’t. A great canvas it provides for potential, but whether or not you’re willing to jump through hoops to make this device work for you is really up to you. Without properly functioning Google Play services, this thing just doesn’t cut the mustard. 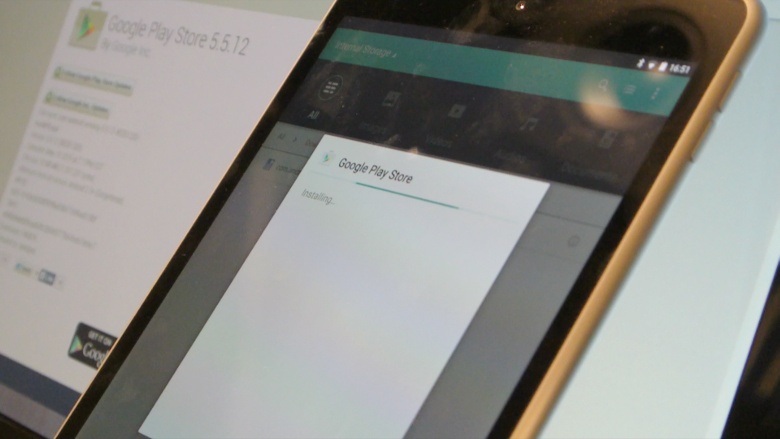 Special thanks to our vendor 28mobile.com for providing us with our Nokia N1 review unit. If you want your own, they’re the people to talk to. Tell’em that Pocketnow sent you!