Here’s why Nokia MixRadio is the best music service ever

Find out why the new Nokia MixRadio music service is the best music service we’ve ever used.
Published 26 November 2013, 10:56 EST

Back in 2010, Microsoft’s Zune Pass was hands-down the most innovative player in the music services industry. Unfortunately nobody really noticed and the service has been losing its limbs one by one over the years. Luckily there’s a new kid in town putting some major innovation into the music services market. It’s just a coincidence that Microsoft is in the process of buying this company.

Last week Nokia launched a new free “MixRadio” app for its Lumia Windows Phones. At first you might think it’s a simple rebranding of the previous “Nokia Music” app and in some ways it is, but in other ways it’s a huge upgrade. I’ve been using it since it was released (almost constantly) and the new features have been quite impressive. I can hardly see a need for any other music service now.

Here’s why Nokia MixRadio is the best music service ever.

1. It’s free when you buy a Nokia Lumia Windows Phone 8. Do you need any other reasons? The cost is built into the price of the phone (even if the phone is a $59 Nokia Lumia 520). No sign up or log-in necessary, just launch the app and play. I could probably stop the list right here and it would already be better than anything else out there, but there’s more. Actually, there is a paid subscription option if you want more features, but we’ll get to that later.

2. No advertisements. Other free music services are ad supported. Not Nokia MixRadio. You won’t have to put up with graphic pop-ups, annoying banter, chit-chat, or jibber-jabber.

3. Better mix playlists. Other music services can create their own automatic “radio” playlists based on one artist of your choosing. Nokia MixRadio allows you to choose up to 3 per mix. This gives you the ability to create something with extra variety. One time on a long road trip with a group of friends, I created a mix that included one favorite artist for each person. That worked really well and while all of these people had much different tastes in music, they each had songs that they loved hearing while we were on the road. There was no need to fight over what radio station to choose or who’s iPod to plug in. Somebody’s favorite music was playing at all times.

4. Offline MixRadio playlists. One very unique feature about MixRadio’s playlists is that they can actually be saved for offline use. On other services you might have to manually create a playlist and then manually set that as an offline playlist on your phone and just enabling that feature requires a subscription fee. With Nokia MixRadio, you can save up to 4 MixRadio playlists to your phone for free. You can delete them and download new ones at any time, or you can enable the paid subscription option to download more. Honestly, 4 is plenty for most long drives or train/subway rides. By the way, the offline playlists are extremely useful on underground subway rides with no internet access! I’ve only downloaded 2 offline mixes and I’m still not bored with them. If I do get bored, I can easily “refresh” them to download a new mix based on the same artists. 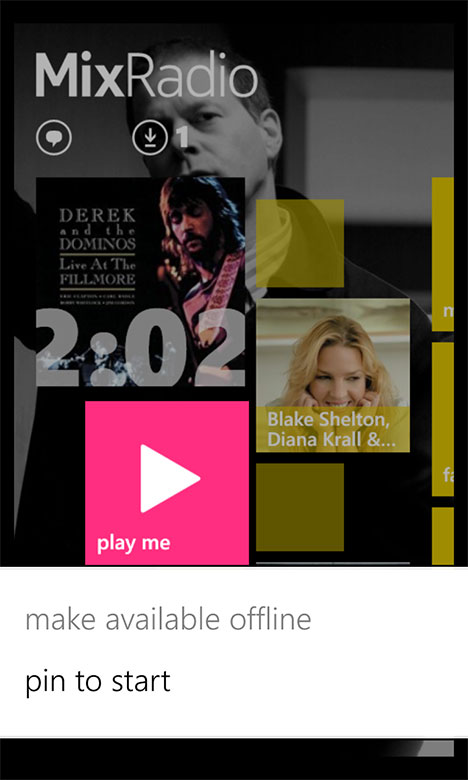 The “Play Me” button. Now this is one big new feature that’s pretty awesome. When you launch Nokia MixRadio there’s a new “Play Me” button in pink right on the front page. That button is going to create a MixRadio playlist with all sorts of music that it thinks you like. When you first launch it, it will probably ask you what artists you like since it has to start somewhere. It might also guess at some of the music you like based on what you’ve already got on your phone or what other MixRadio playlists you may have already created. It will also use whatever “thumbs up” or “thumbs down” ratings that you apply as you listen along with which other artists you specify as favorites and which songs you skip. In use, it generally requires very little maintenance and it’s extremely easy to start listening to music that you personally love with one touch. What’s more is that it organizes the music styles intelligently. Maybe you like heavy metal and soft jazz music. The “Play me” button isn’t going to randomly combine those styles into a playlist. It’s going to start off with a particular mood, go with that style for a while and then switch things up later on. Now say it starts with something slow and smooth, but really you’re in the mood for something else, all you have to do is press the “Play me” button again and it will change the mood of the mix for you.  Mega-awesome bonus tip: Press and hold on the “Play me” button to download the entire mix for offline listening and/or pin it to your start screen for instant access.

6. Mix sharing. The new MixRadio app now supports sharing mixes and what’s awesome about this is that whomever you share it with will be able to listen to 3 full songs in their web browser for free (the first one is the one you’re listening to when you share it.) The person who receives the link doesn’t have to log into anything or sign up for anything. It’s completely anonymous and it works on most smartphones including iOS and Android along with just about any desktop web browser. After the person you shared it with listens to 3 full songs, it will ask them to subscribe to MixRadio+ though, which is more than fair and a whole lot better than only getting a 30 second clip like you would with other services. 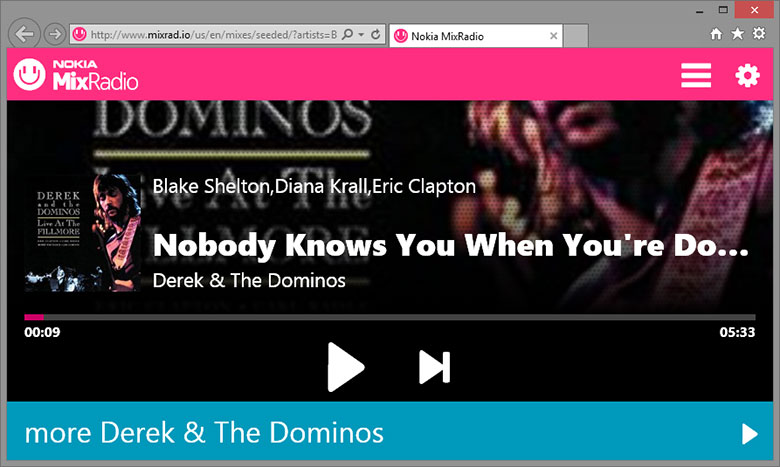 7. Better battery life. One thing I’ve noticed about Nokia MixRadio is that it’s so much more power efficient than Pandora, for example. If I stream Pandora on my Nokia Windows Phone all day, the battery will be down to around 20% by the end of the day. If I do the same with Nokia MixRadio, the battery is barely down to 60%. That’s with streaming the music over WiFi even. The battery efficiency is even better if you play mixes that you’ve already downloaded for offline listening.

8. The music doesn’t stop. We’ve already mentioned that there are no ads to interrupt your music, but if you’ve used Pandora on Windows Phone you may have noticed how it periodically stops playing the music and asks if you’re still listening with a pop-up on the screen. You have to press a button to continue streaming Pandora music even if you’ve got the premium features (which are available on Windows Phone free for 1 year). With Nokia MixRadio, the music just keeps playing. It might stop if your internet breaks or your battery dies, and certain mixes will start over from the beginning, but still… basically you’ve got endless music to listen to.

Of course, there are a few gotchas and limitations to the Nokia MixRadio service. You can’t rewind a song and play it again from the beginning. If you want to listen to a particular song over and over, you can go to your “Recently Played” listing, tap the song and purchase an MP3 of it.

Another limitation with the free service is that you can only skip 6 songs within an hour. If you make your mixes correctly, you probably won’t ever want to skip a song though. The software might occasionally force you to “refresh” offline mixes that you’ve saved to your device due to certain licensing issues.

If all of that free stuff isn’t enough for you, there’s also a MixRadio+ option for $3.99 per month where you can add unlimited skips, more offline mixes, high quality audio, full lyrics for each song, and the ability to listen on a PC, Mac, web browser, and Windows 8 app.

Compared to other music services, there are still a few things missing.  You can’t create manual playlists and sync them to the cloud and across your other devices like you can with iTunes and Xbox Music.  Honestly, that feature has very little utility anyway.  What Nokia has done is so much better.  There also isn’t as much of a social networking aspect as we original saw with the Zune Social and then Spotify and iTunes’ Ping, but again not many people use that and Nokia’s MixRadio sharing feature works pretty nicely with existing social networks.  You just can’t “follow” your friends to stalk their listening habits.  While there is a music store, it’s not immediately apparent. You can search for and buy music, but there isn’t a new releases listing or a top songs listing.  Granted, that would probably be a duplication of features already found in Windows Phone’s Music Store.  There also isn’t any custom cloud storage, but again the point of Nokia MixRadio is one-touch listening to everything you love. Having to manually upload songs somewhere is a chore and waste of time compared to how Nokia MixRadio works.

Not since the Zune HD,  Zune 4 software, and the Zune Pass service has there been this much innovation in the music services industry.  If Microsoft can integrate Nokia’s MixRadio service into its Xbox Music service and perhaps put the people behind MixRadio in charge of future Xbox Music upgrades, we could see something really special coming to the Windows 8 PCs, Xboxes, and Windows Phones of the future.

Both the laptops are now available for purchase via Amazon India website.