It’s gone official, we’ve gone through its spec list, and we’ve compared it to its older sibling (the Lumia 930). Now its time for a second comparison, except this time to the king of all cameraphones: the Nokia Lumia 1020. Let’s check out the differences in a full Nokia Lumia 830 vs Nokia Lumia 1020 spec battle down below.

It’s not a total kill like what happened when we compared the Lumia 830 to the Lumia 930, but that’s probably because the Lumia 1020 is starting to show its age a bit. The Lumia 1020 has a screen with a higher pixel density, though it loses out when it comes to the processor – it’s a generation of Qualcomm chips behind the 830. The Lumia 830 offers SD card support, while the Lumia 1020 does not, and the Lumia 830’s battery is slightly larger than the 1020’s. They both run Windows Phone 8.1, though it’ll probably take a while for the latest firmware (Lumia Denim) to make its way on over to the older 1020.

In the camera department, there’s no competition, with over four times the megapixels to be had on the Lumia 1020. That doesn’t necessarily mean the 1020’s camera is better in practice, but on paper, you’re going to have a tough time beating that. 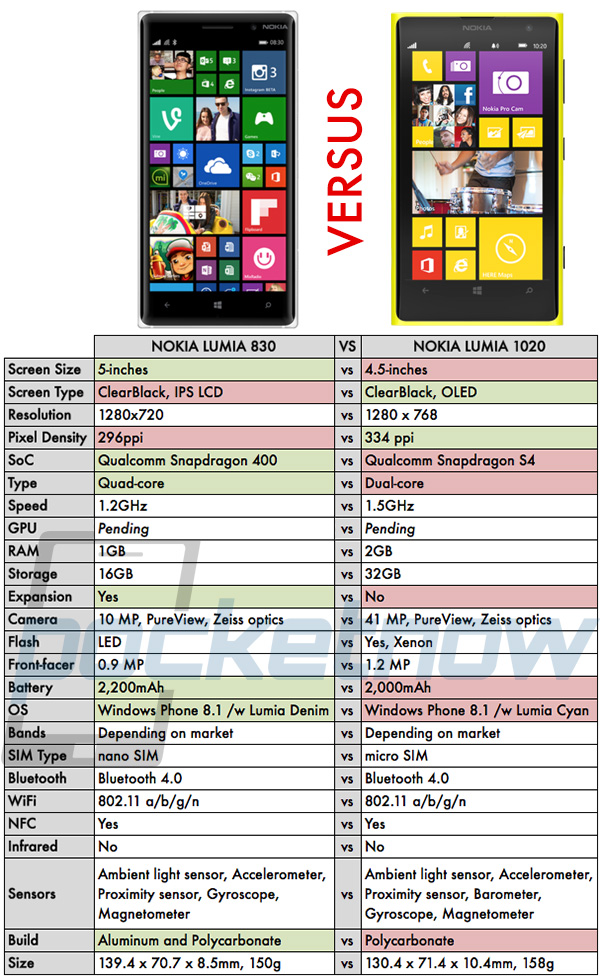 iPhone 13 Mini will rock a smaller notch and rearranged camera lenses at the back that are now positioned diagonally.

To help make your purchase decision easier, we have compiled a list of the best OnePlus 9R cases you can buy right now.

Today's best deals come from Amazon and Verizon, where you can find the previous…