The Lumia 822 is Verizon’s top Nokia Windows Phone. But are its specs overshadowed by its bulk? Read our Quick Review to find out!

Like its magenta-hued Lumia 810 cousin, the Lumia 822 is a custom build of Nokia’s midrange Lumia 820 for an American carrier. Unlike its blocky T-Mobile USA companion, though, the 822 packs LTE support into its redesigned frame to accomodate the needs of its host, the much-larger Verizon Wireless network.

The 822 marks not just Nokia’s slice of a Windows Phone resurgence on America’s largest carrier, but the first significant Nokia phone of any kind to land on Verizon in quite some time. In the absence of CDMA-friendly versions of either the Lumia 900 or Lumia 920 on Big Red, it also means the Lumia 822 is the highest-tier Nokia Windows Phone available on the carrier — and it’s sharing shelf space with the premium Windows Phone 8X from HTC.

If you’re a Windows Phone seeker already on -or considering- Verizon Wireless, should you entertain the notion of pocketing your very own Lumia 822? We hope you’ll have a better idea after our Quick Review. Head on down to get the full picture. 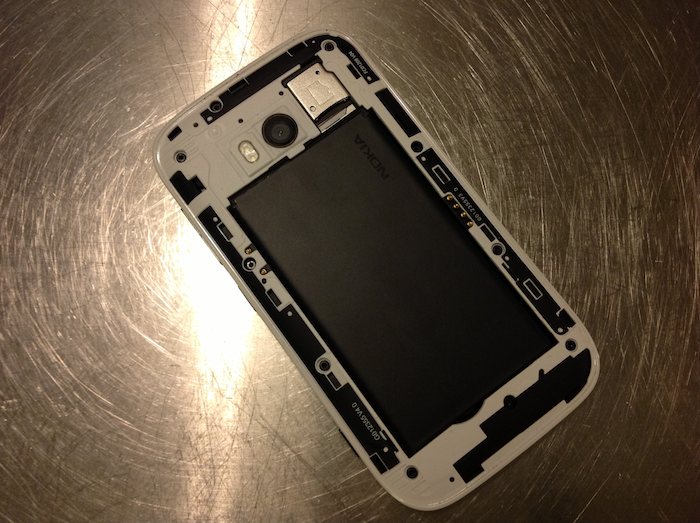 The Lumia 822 packs specs that will sound familiar to owners of higher-end devices like the Lumia 920. At its heart sits a dual-core Qualcomm S4 CPU buzzing along at 1.5GHz, backed up by a gig of RAM and 16GB of onboard storage. That’s expandable, via a MicroSD slot under the SIM tray, to an additional 64GB.

As mentioned above, support is included for 4G LTE connectivity in addition to the 3G CDMA (domestic) and HSPA (international) radios, and the usual short-range wireless options for WiFi a/b/g/n, Bluetooth 3.0, and NFC are here as well. Wireless charging is also supported via the Qi standard, though it requires the purchase of a separate battery cover to protect the removable 1800-mAh power pack and the 8MP camera optics. 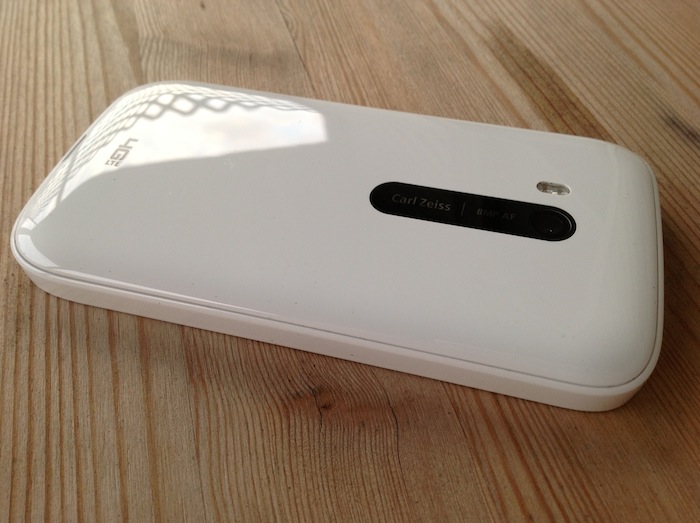 That’s all encased within a 142g, 11.2mm-thick chassis that looks somewhat like a lozenge and feels a bit like a child’s toy. That’s not because it’s made of cheap materials -the device actually feels like it could handle quite a beating- but because its sheer sides and sharp edges amplify its substantial thickness. That, coupled with the pronounced chin below the display, gives the Lumia 822 a clunkier appearance than comparable midrange models like the sharp-looking HTC Windows Phone 8S. But on the bright side, the 822’s added thickness, combined with its pleasantly-rounded battery cover, makes it sit rather nicely in the hand. It’s quite a comfortable device to hold.

The display, another reminder of its midrange breeding, is a 4.3-inch AMOLED panel that’s the very essence of compromise. The screen features excellent deep blacks and highly saturated colors, in addition to impressive viewing angles that put the higher-end Lumia 920 to shame. That comes at a cost, though: its resolution is quite low at 800×480, with a pixel density of just over 216ppi. While it makes Windows Phone 8’s Modern UI “pop” rather pleasantly, it’s not going to age gracefully as the 1080p display revolution really starts rolling. We’re not sure we’d want to be stuck with this screen for a full two-year contract, but its protective Gorilla Glass 2 layer means it stands a better chance of surviving that long with a minimum of scratches. 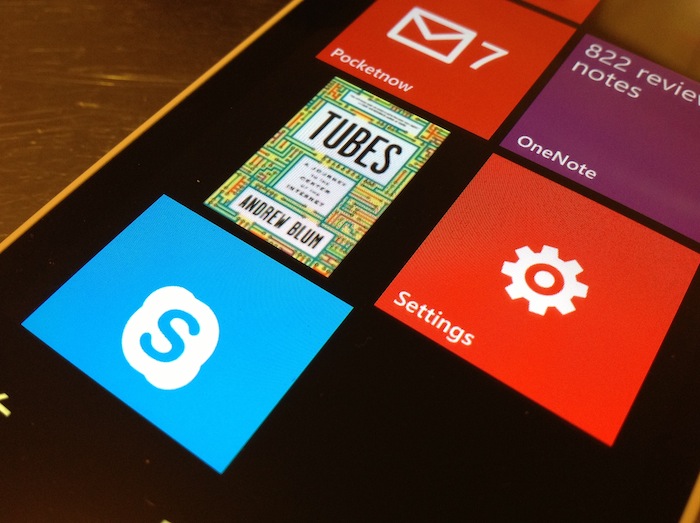 The bottom line on the hardware side: if you’re not bothered by the occasional visible pixel edge and don’t mind a phone with a few extra grams here and there, the Lumia 822 packs a solid feature set that gives the Windows Phone 8 platform a lot to work with. 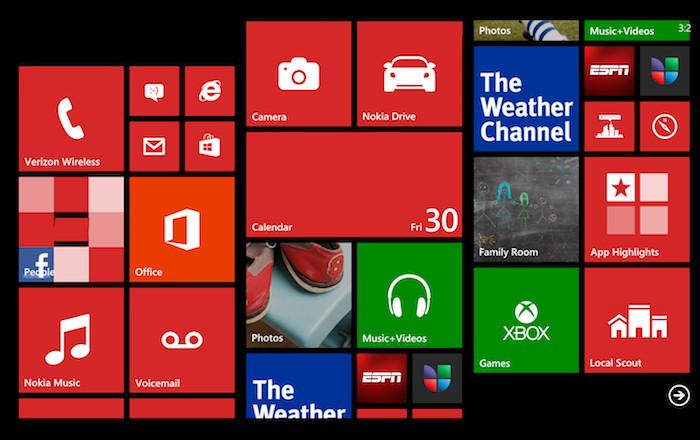 “A Windows Phone is a Windows Phone.” Longtime users of Microsoft’s platform will be familiar with the sentiment, if not the verbatim quote. The Windows Phone 7 OS of yesteryear featured outstanding performance seemingly irrespective of hardware — and despite a massive overhaul of what’s running “under the hood,” that’s carried through to version 8 as well.

From a responsiveness standpoint, everything on the Lumia 822 matches every other Windows Phone 8 device we’ve used almost identically. Were it not for subtle differences in display quality, size, and frame-rate, we’d have a tough time telling the Lumia 822 from a Lumia 920 in a blind interface comparison. 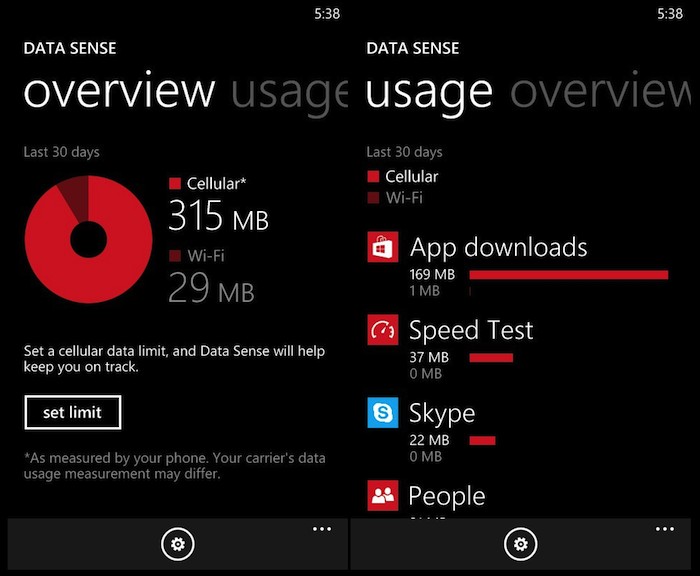 Verizon has added its fair share of bloatware, though not nearly as much as T-Mobile foisted upon Lumia 810 owners. Probably the most interesting and useful of the carrier’s additions is Microsoft’s Data Sense app, which displays data usage over both cellular and WiFi connections and allows users on finite data plans to set limits and alerts for data consumption in order to avoid overage charges. There’s also a handy utility that displays nearby WiFi hotspots overlaid on a local map, which could come in handy in a pinch.

Of course, it’s the Nokia-specific software suite that makes this device a Lumia, not just another Windows Phone. It’s one of the principal value-adds of Nokia smartphones today, and we’ve covered it in-depth in our Lumia 920 and Lumia 810 reviews. For more on the Nokia collection, we direct you to those pieces for reference (links will open in a new window):

And if you’re looking for a more hardware-agnostic overview, be sure to take in our exhaustive review of the platform as a whole: 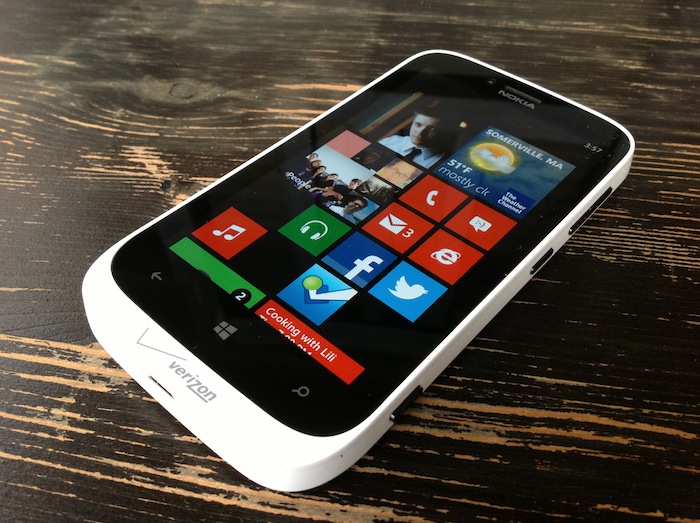 In sum, the Lumia 822 runs Windows Phone 8 very well. Those upgrading from another Windows Phone, or folks jumping platforms in search of a smooth, responsive smartphone UI, will find a lot to like in this device.

Lacking the PureView branding and optical stabilization of the Lumia 920, we were fully prepared to be disappointed by the Lumia 822’s camera. We were relieved, therefore, when it turned out to be quite the capable little shooter.

We found that still shots came out quite nicely, especially when we made use of the Scenes functionality in the viewfinder’s settings menu. Especially helpful in the absence of an HDR mode was the “Backlight” setting for adverse lighting conditions, and the “Night” mode delivered some excellent low-light enhancement for shots we thought would come out completely black. We’d still like to see HDR and other common features make their way to Lumia devices (and Windows Phone in general), but the Scenes mode goes a long way toward making the Lumia 822’s camera a solid replacement for a point-and-shoot. 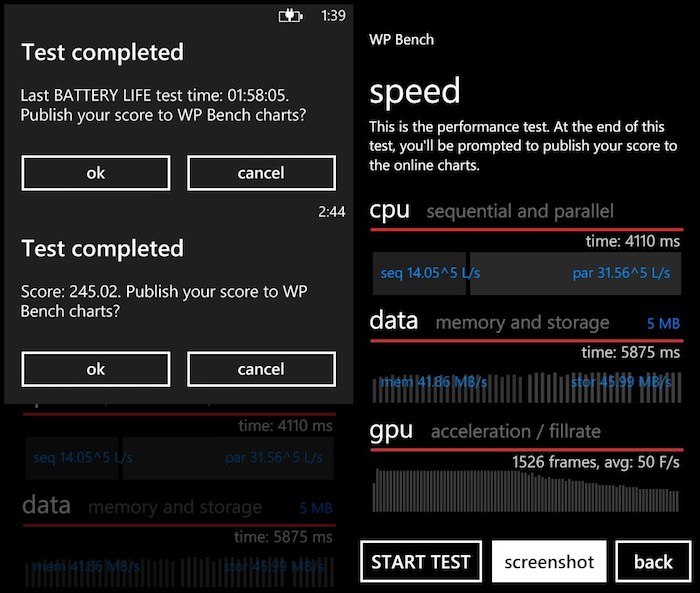 The Lumia 822 scored 245.02 on the Windows Phone benchmarking utility WPBench, and endured for just over an hour and 58 minutes on that same app’s battery stress test, which runs the CPU at full cycles until battery depletion. (For comparison, our AT&T Lumia 920 lasted two hours and 30 minutes on the same test.) In a reversal of that extreme, an extended period off the charger during which the device saw exceedingly light use after an hour of heavy downloading (app sync), the Lumia 822 endured for 24 hours before chirping a low-battery warning. In typical usage, the device easily lasted us through the day. All testing was performed in the Greater Boston area with LTE enabled and good-to-excellent signal strength.

In other conventional metrics, the Lumia 822 performed admirably: voice calls were clear over both cellular and Skype connections, though the speakerphone was much tinnier than we’d prefer. In browsing, Internet Explorer 10 loaded and zoomed pages with its customary responsiveness, and Verizon’s 4G LTE network delivered speeds averaging around 10Mbps down and 4Mbps up. Audio output through the 3.5mm headphone jack was plenty loud, and the onboard equalizer controls and Dolby Headphone toggles were handy for tweaking our tunes, but we wish they weren’t buried so deeply in the Settings menu. Finally, though we’re not hardcore gamers, one of our favorite Windows Phone diversions, the air-combat simulator Rise of Glory, ran without a hitch. 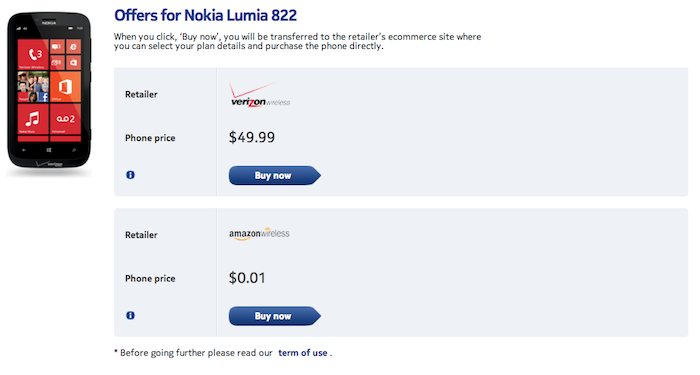 The Lumia 822 is available now via Verizon Wireless for $49.99 on a two-year contract, or $449.99 if you have an aversion to commitments. If the photo above, from Nokia’s Lumia website is to be believed, third-party retailers like Amazon look to be getting in on the low-price action as well. As always, though, be warned that such low prices often require an additional termination fee atop the carrier’s if you opt out of your contract early. The device is available in black, gray, and white. 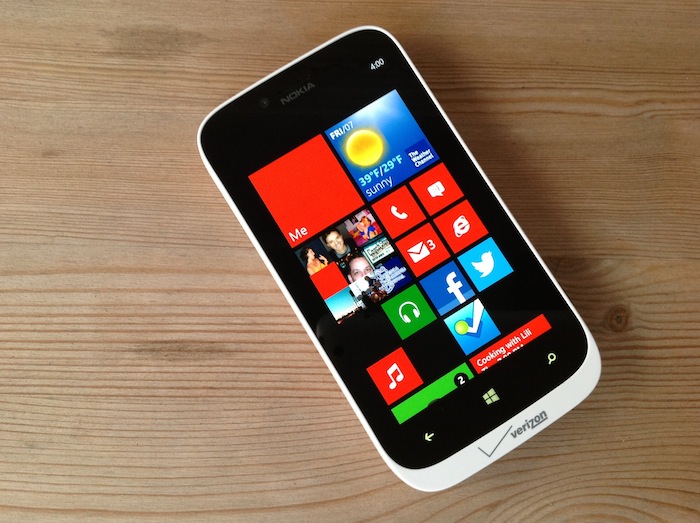 The Lumia 822 delivers exactly what Nokia and Verizon wanted: a midrange Windows Phone 8 device packing almost the full range of Lumia enhancements, custom-tailored for America’s largest wireless network. And somewhere in the midst of that tailoring, between Verizon’s LTE support and Nokia’s excellent camera optics, the 822 became something more: we think the device has an impressive enough feature set to warrant the label of “mid-to-high-tier” smartphone.

It loses points for including a display from last year and a body only a mother could love, and Windows Phone 8 still has a ways to go before it can match its contemporaries in overall utility – at least in the consumer space. But the Lumia 822 is a solid device, and at $49.99, the price is certainly right for the amount of features you’re getting. If you’re shopping for a Windows Phone on America’s largest network, this custom job from Nokia deserves serious consideration. 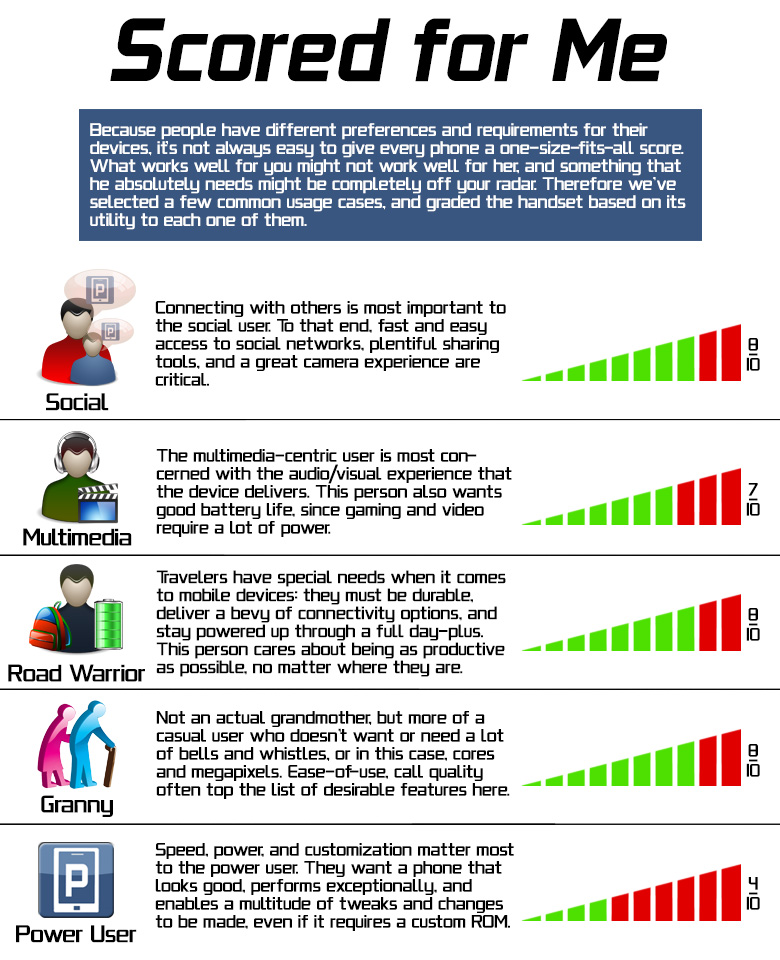