Is Windows Phone running with that signature buttery smoothness on the Lumia 610 too? Check out our full review below to find out!
Published 13 June 2012, 09:35 EDT

The Nokia Lumia 610 represents a new breed of Windows Phones, those running Windows Phone 7.5 (codenamed Tango). This version of the platform was designed by Microsoft with low specifications in mind and the Redmond-based company, together with its OEMs, like Nokia, are hoping that these low-end/budget phones will help the platform gain market share as well as enter emerging markets. Due to the lower specifications, the price-point of these devices is also on the low end, trying to compete with other similarly-priced smartphones running Android or the almost-abandoned Symbian.

Windows Phone is known as a platform that doesn’t require strong processors and a huge amount of memory. It is able to deliver a smooth user experience on lower specifications, but the internals of the Lumia 610 are even below those found on wave-one Windows Phones. Do these specifications alter the user experience? Is Windows Phone running with that signature “buttery smoothness” on the Lumia 610 too? Check out our full review below to find out!

The Nokia Lumia 610 is not a powerhouse. It has low specifications compared to even first-wave Windows Phones, not to mention those on the market today, like the Lumia 900 or the Titan II. However, the low specifications are exactly what Microsoft had in mind with Tango. At the heart of the Nokia Lumia 610 there’s a single-core Qualcomm Snapdragon processor clocking at 800MHz, and there’s not much RAM to complement it: 256MB.

The ROM size is also 256MB and the internal storage is half of what you’ll find on most Windows Phones on the market at the moment, with only 8GB for your pictures, videos and documents. Of course, there’s always SkyDrive to expand it some more — since there’s no microSD expansion slot on the phone (which is not Nokia’s fault at all). The camera is one of five-megapixels with an LED flash, and the screen is lower-end in terms of quality. It’s a 3.7-incher with a WVGA resolution of 480×800 pixels (and 252 ppi). 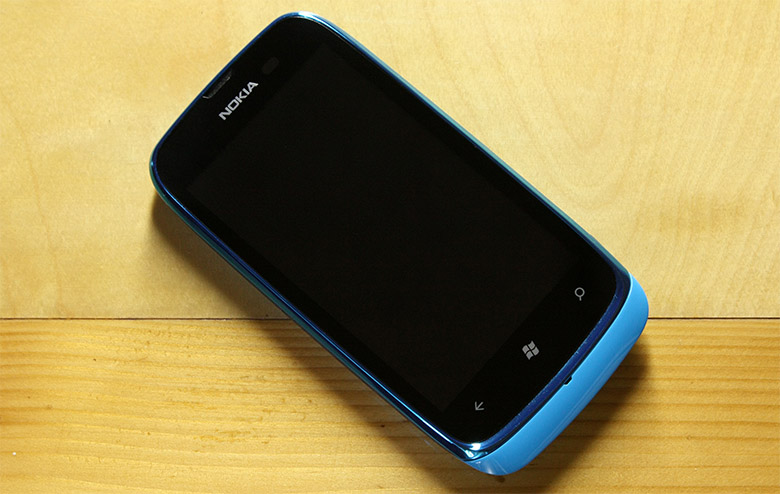 If we need to describe the Lumia 610 in a single word, we’d probably use the word “candy,” not because it is somewhat of a candy bar design, but because of the shiny backing which embraces the lower part of the front as well as the vibrant color. Nokia made sure to make the phone available in several flavors: white, magenta, black and the cyan which we’re reviewing.

The overall size of the smartphone is medium in a world where huge devices are more and more popular, rocking 5.3-, 4.8- and 4.7-inch screens. It measures 119mm in height, 62mm in width and 12mm in thickness. With the battery inserted, it weighs 132g. 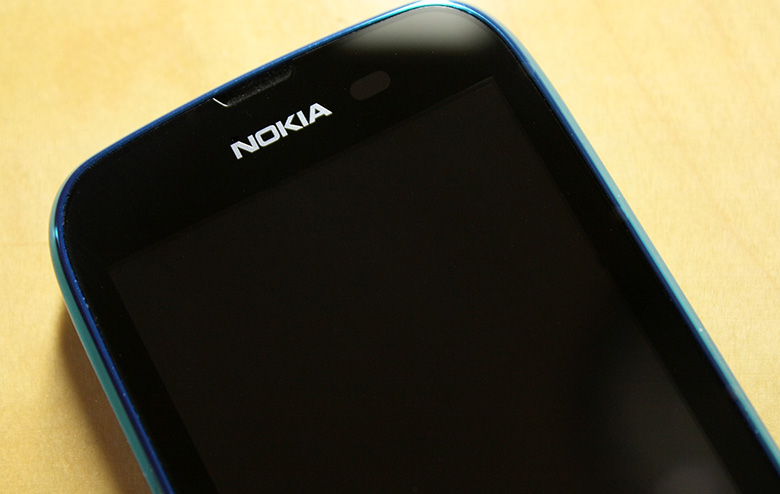 The top part of the phone’s front holds a tiny speaker right above the Nokia logo. There’s a proximity sensor and an ambient light sensor at the far right but you will not find a front-facing camera on this phone — which could be a deal-breaker for some while others can easily live without it. 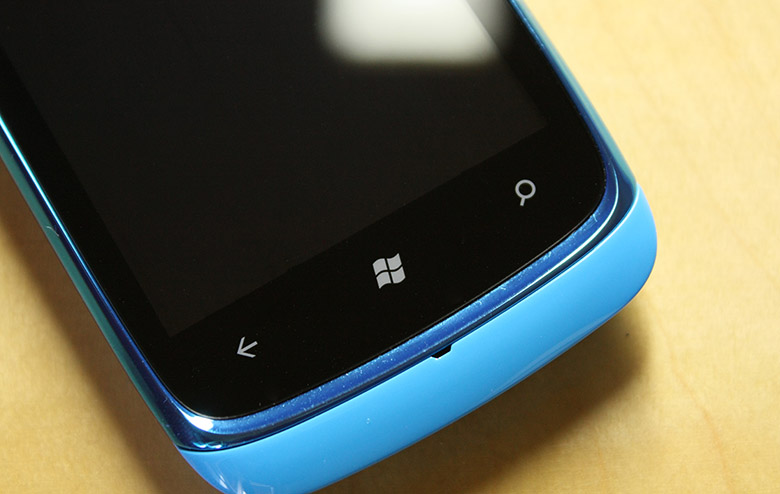 The bottom part of the Lumia 610’s front features the compulsory Windows Phone buttons, right below the screen. They’re capacitive and refer to Back, Start and Search. Beneath them there’s a small microphone hole right under the dark blue metal strip that embraces the screen all the way to the top and around the sides. 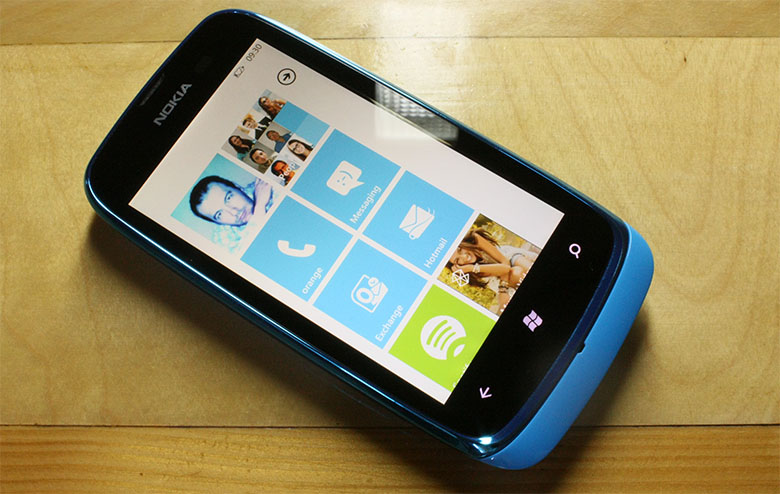 The 3.7-inch screen is just a little bit larger than the screen of the iPhone, which is 3.5 inches and already considered small! Unfortunately this is not Nokia’s best screen, not the ClearBlack AMOLED found on the Lumia 900 and Lumia 800 phones. Instead, the Finnish manufacturer went with a lower-end screen which doesn’t disappoint at all. Color reproduction is good, contrast levels are normal and the overall color temperature is a little bit warm. 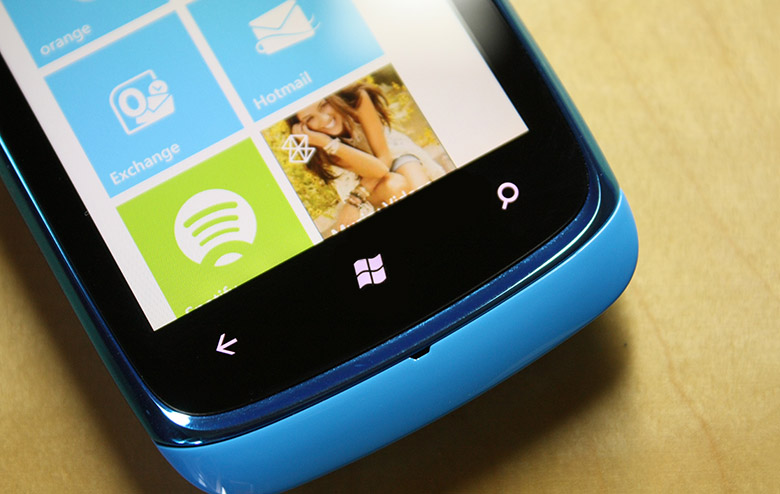 One thing we really didn’t like about the Nokia Lumia 610’s display is the backlight bleeding. You will get plenty of that on the sides, top and bottom. We found it to be intrusive and decided to go with Windows Phone’s white theme instead of the dark one but the bleeding is visible in situations where there’s a lot of black displayed. 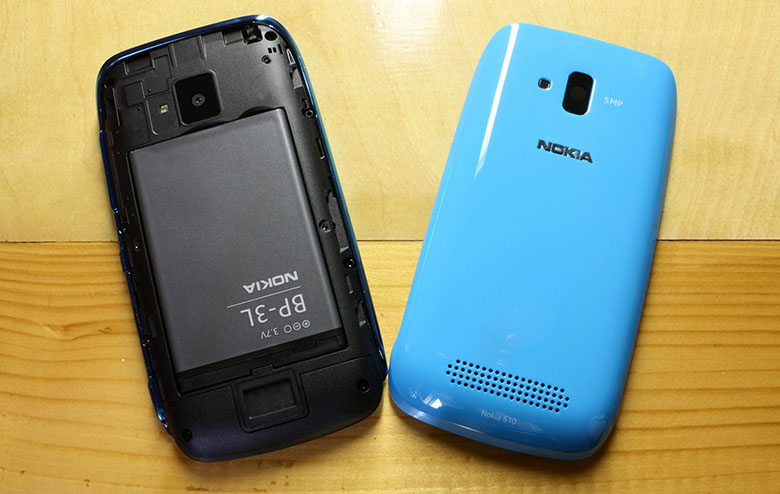 The back is where the five-megapixel camera is, with a tiny LED flash to its left. The bottom part holds the grill with nicely executed holes allowing the metallic sound from the speaker behind to shine through. You can definitely listen to music on the Lumia 610 if you don’t mind all the hisses and the absolute lack of low frequencies. We didn’t expect woofer-like performance but we would have liked to hear some low-mids every now and then. 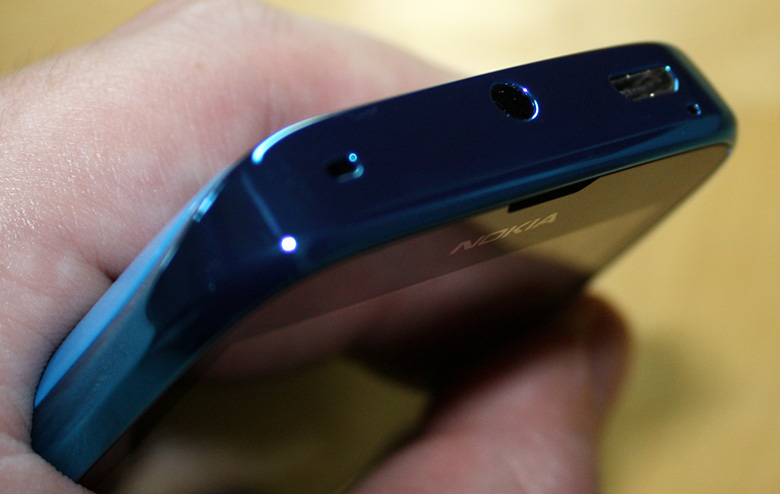 The top is where you find the 3.5mm headphone jack for audio-out, and the lanyard hole on the left to help you carry the Lumia 610 strapped to your neck or wrist. On the opposite side there’s the microUSB port for syncing and charging, and next to it there’s your secondary microphone for noise cancellation. 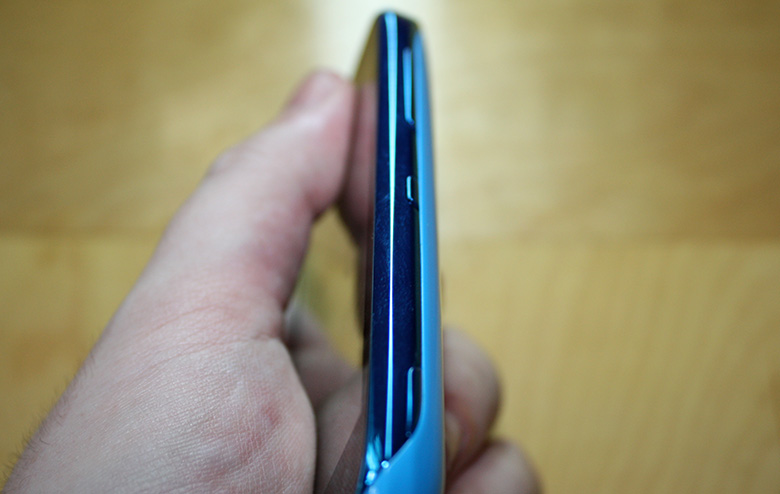 While there’s absolutely nothing on the left side, the right side is where you will find the buttons, all four of them. Starting from the top you will find the volume rockers for volume up and volume down control. The tiny button in the middle is the power button for turning the device on and off as well as putting it to sleep, and on the bottom there’s your camera button. It has two steps which can be easily discerned — which is always a good thing. One light press to focus and a full press for shutter release. 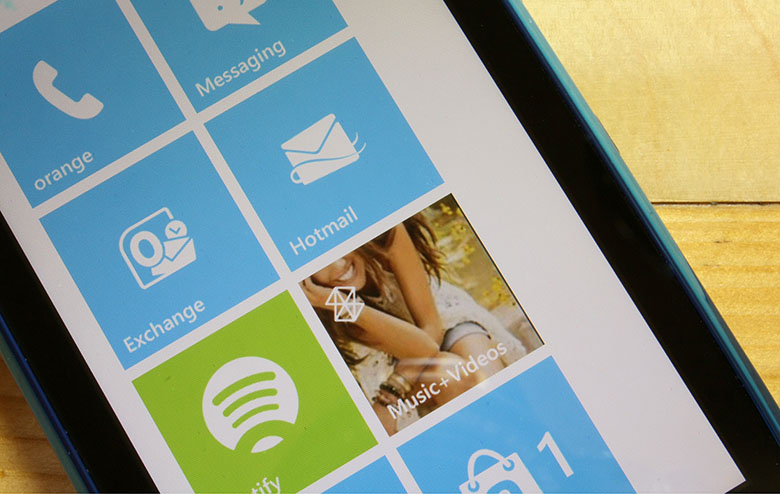 Thanks to Tango, the entire Windows Phone experience with the Metro design signature, Hubs and Tiles, is close to unaltered on the low specifications of the Lumia 610. However, the About screen will immediately inform you that “because this phone has 256 MB of RAM, application selection and features may be limited“.

This is true! You won’t be able to install applications like Skype for audio and video calling and you will not be able to play games like Angry Birds, though developers are probably working on dedicated lower-end versions for their software titles. 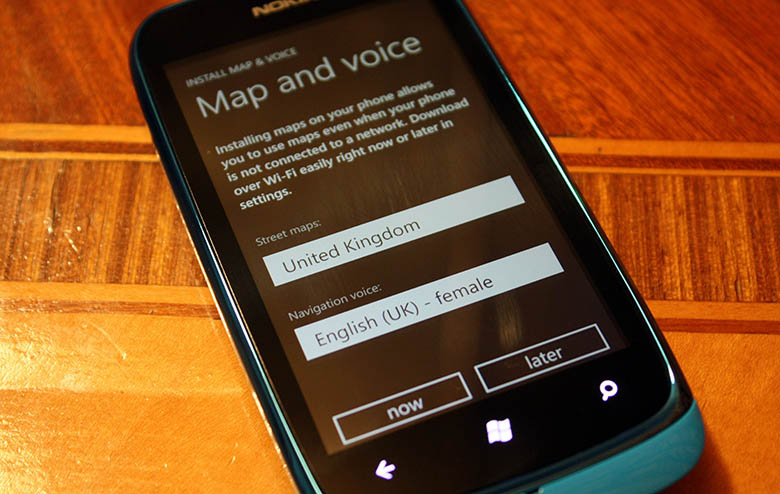 We’ve run into situations when we had to wait one or two seconds for the phone to do something, like open Bing Search, Me Tile, or the Marketplace (wearing a special, customized Nokia icon). Application load times are also a tad longer than on other Windows Phones, but the Lumia 610 is only lagging behind a couple of seconds, which is nothing major if you don’t have a more powerful Windows Phone nearby to compare them side by side. Once applications are loaded, everything is smooth. 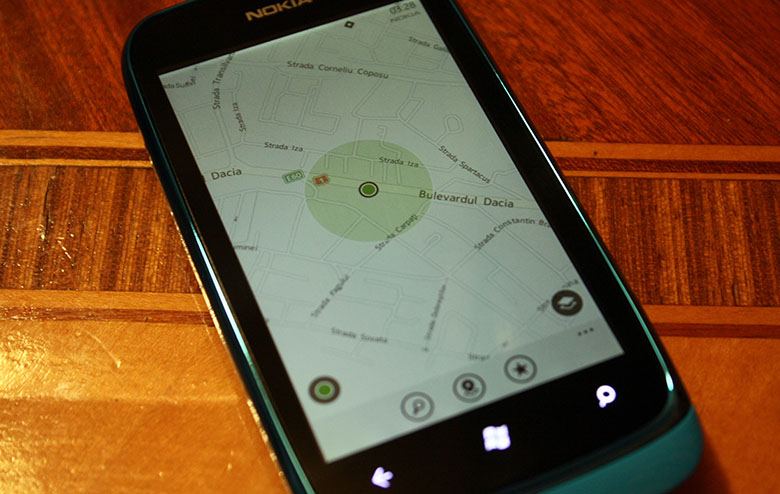 Since the Lumia 610 is a Nokia phone, you will be able to use all the free goodies the Finnish manufacturer offers you, like Nokia Drive, Nokia Maps and Nokia Transport, which are on the phone out-of-the-box. While you can download specific maps for free for your region to use with Nokia Drive — and Nokia Maps probably has you covered — Nokia Transport will probably not be able to help you if you live in an unsupported region. 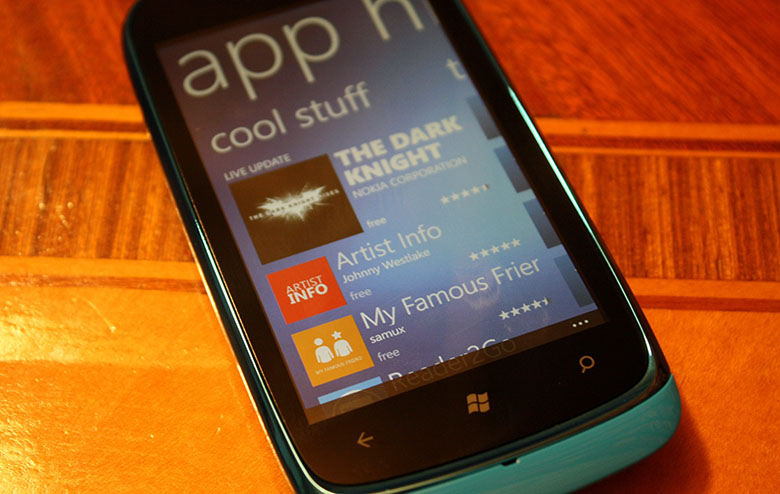 There’s also an App Highlights title installed where you can see a nice representation of recommended applications as well a Contacts Transfer application to help you move your contacts via Bluetooth from your old phone (if supported).

When you see that there is a 1,300mAh battery inside the box, you immediately start to wonder how many times you will have to recharge the Lumia 610, since that’s a small battery if we consider the specs alone. The pleasant surprise comes a full day after the battery being charged when you realize that it’s nowhere near empty.

Windows Phone does a great job at saving battery life. For a typical user that makes phone calls, sends out text messages, checks on his friends/family/coworkers on social networks, sends e-mail messages and listens to a couple of songs via Zune, the battery will likely last for one and a half days. If you are a music junkie (or you heavily use your phone throughout the day), the battery should last for a full day without a problem. There’s also Windows Phone’s neat little feature called “Battery saver” which will add a couple of minutes to your run.

The five-megapixel camera on the Lumia 610 is not a high-end camera, like the one on the Lumia 900 or Lumia 800. There is no Carl Zeiss lens but it surely delivers (considering the price-point). Images are clear and crisp with nice color, at least until the situation requires the camera to fire off the built-in LED flash. That’s when you can no longer count on your phone to capture decent pictures. The tiny LED flash not only delivers a minimal amount of light, but the camera software manages to ruin the images so that only a small, well lit portion of the image is enjoyable.

Video recording is mediocre and so is the audio quality of video files. Again, if you’re outdoors, the colors will be nice and the recorded video will be pleasant. Once you get inside, the fun stops. On-the-fly focus works; this is the good news. You will be able to shoot objects far away as well as move to close-ups. However, focus is slow, and so is exposure adjustment; this is the bad news. And the worst news: it can only record in VGA resolution! For the casual photographer and cameraman who takes a picture or shoots a video every now and then to share on a social network, it will probably do just fine. After all, it is a budget phone.

The Nokia Lumia 610 is not available in the U.S. at the moment of this review. You can always go for its older brother, the Lumia 710 on T-Mobile but if you have to have the Lumia 610 you will need to import it from Europe or other regions. It will cost you anywhere between $210-$260 unlocked, unbranded and unsubsidized.

If you are looking for a budget smartphone to either be your or someone else’s first — and you don’t want to go with similarly or even lower-priced Android devices — the Lumia 610 is a nice companion. Microsoft and Nokia have proven that Windows Phone can not only be fluid on 1GHz and above processors with 512MB of RAM, but it can also perform with buttery smoothness on an 800MHz CPU coupled with only by 256MB of RAM.

There could be two drawbacks for some of you: the missing front-facing camera and the limited application selection available. Applications like Skype will not run (not even install) due to the low specs of the Lumia 610, and some games (like Angry Birds) are not supported at the moment. However, developers will probably add low-spec device support to the list (Rovio will probably be one of them), but it is something to consider. 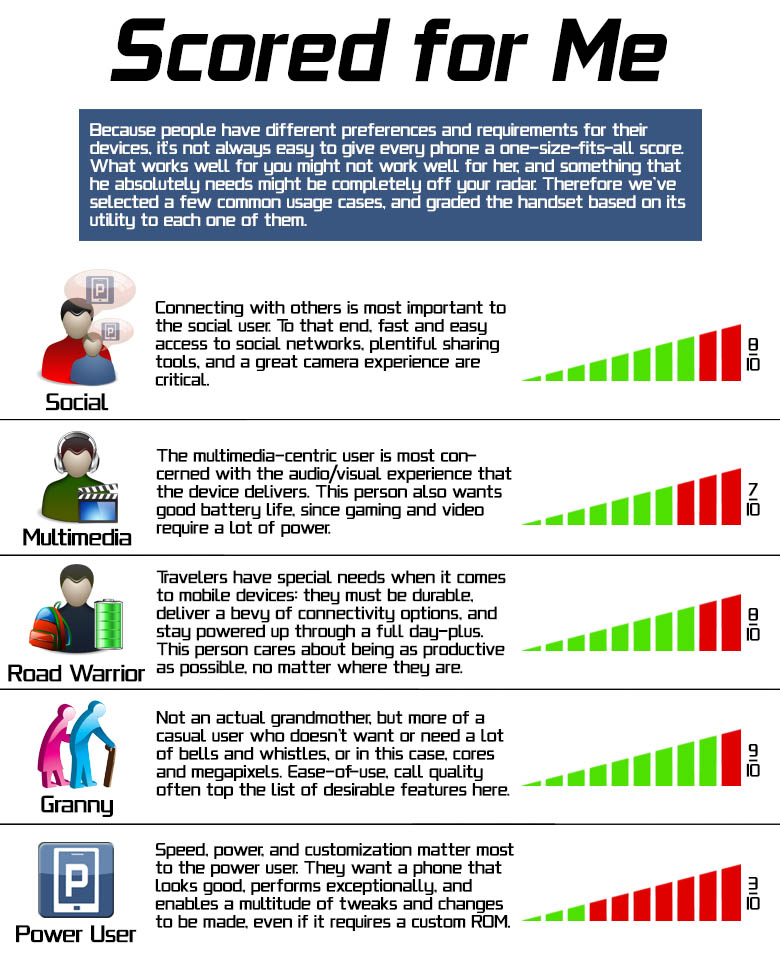 Here are the best Galaxy S21 Plus cases which you can buy right now.

It seems that LG may be getting tired of losing money in its smartphone business, which could leave its future rollable phone in a tight spot