Even with Windows Phone 8 about to hit the scene, Nokia’s far from done with WP7, and we’ve heard about the company’s work on an all-new handset along those lines, the Lumia 510. Earlier this month, we got the chance to check out a couple images of the phone in the wild, where it still appeared to be running Tango. We’re still anxious to get a closer look at the hardware itself, but in the meantime we have a fresh test pic from the 510’s camera to check out.

Snapped last week, the image’s EXIF data reports it as coming from the Lumia 510, as well as confirms that the phone isn’t yet running Windows Phone 7.8. We can see that the 510’s camera has a f/2.4 aperture, which while not as nice as an f/2.0, is still pretty good.

By all accounts, the Lumia 510 will be a budget-priced Windows Phone handset targeted at developing markets. From what we’ve heard about the hardware, it sounds like a slight upgrade to the Lumia 610, giving the phone a larger four-inch display. Nokia has yet to officially announce the handset, but we’re expecting to see it launch in China at some point. 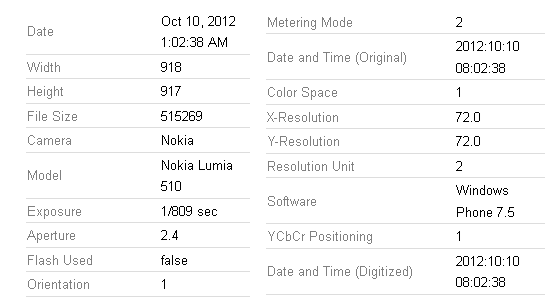