Nokia Lumia 1520 Mini rumors are too good to be true

The Nokia Lumia 1520 is Windows Phone’s first phablet ever; with a six-inch Full HD screen, it’s quite a large device, with some real flagship-worthy internals that include a quad-core Snapdragon 800 processor, 2GB of RAM, 32GB of built-in storage (with microSD expansion), 3,400 mAh battery, and a 20-megapixel camera. Recent rumors from China hint that Nokia might be working on a smaller version of the phone.

While the international version of Verizon’s Nokia Icon might come to mind, the specs mentioned by the report seem to conflict those we’ve already heard for the Lumia 929. Heck, they seem to conflict even common sense, as they’re mentioning a 4.3-inch Full HD display (with 513PPI), 3,000mAh battery with wireless charging, and the same Snapdragon 800, 2GB of RAM, and 32GB of storage, like on the Lumia 1520. As you can see in the image below, the Lumia 1520V moniker is proposed for this purported phone. As far as the report itself is concerned, it seems too good to be true to us. 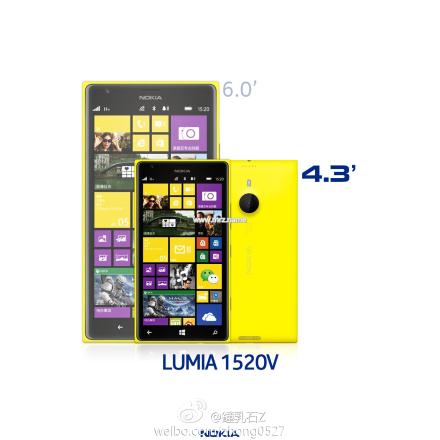