Nokia Lumia 1020 for AT&T tentatively leaked in alleged press render. Or is it the Lumia 909?

Nokia Lumia 1020 is the rumored name for the upcoming 41-megapixel goodness we’ve seen leaked as the EOS, Elvis, and Zoom. Previous leaked images tried to depict the looks of the phone but thanks to a recent leak we now have what appears to be a press render of the phone on AT&T.

Pictured above is the EOS for AT&T, at least according to reports. If you’re having trouble differentiating it from the Lumia 920, for instance, we won’t blame you. However, the back — the one which we’re still missing and dying to see leaked — is where the action is with that famous 41-megapixel system that made the 808 PureView the king of camera phones. If all else fails, we’ll see it up close and personal at the July 11 event which we’ll cover extensively.

An interesting thing we’re seeing here is the Nokia Pro Cam tile, which is probably just a Camera app lens, like the Nokia Smart Cam on the Lumia 925. It’s functionality is yet unknown, but we’re guessing it will be closely related to the physical camera construction.

Update: Just as we were complaining about the lack of an image depicting the back of the device, here it is! Rather small, but you can definitely tell that a number “41” is there, alongside a xenon and an LED flash, just like on the 808 PureView. 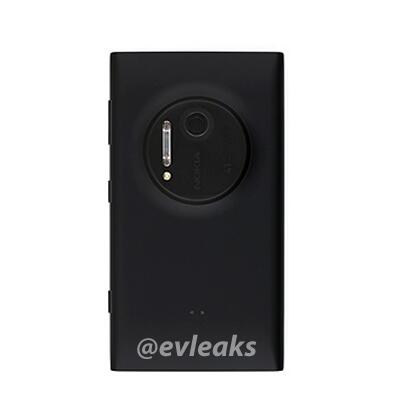